From Small Screen to Silver Screen: An Interview with "Searching" Writers 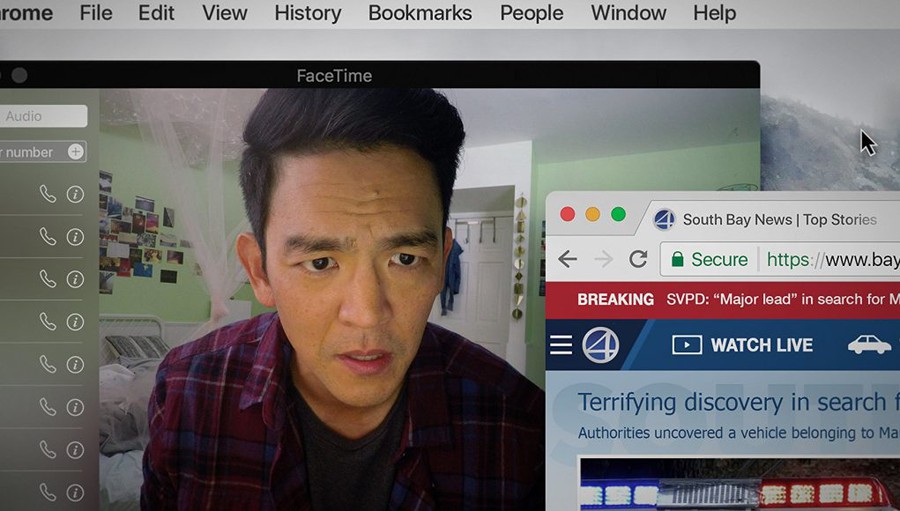 A still from "Searching."

If, according to doughnut man David Lynch, watching a film on your cell phone is a sad excuse for a cinematic experience, then watching a film told almost entirely through a computer screen should be equally disappointing. After spending all day looking at both my phone and laptop, I find it hard to imagine going to the movies just to see these same small screens blown up onto the silver screen. And yet, Aneesh Chaganty and Sev Ohanian utilize these screens from our everyday life to craft a film that is not only an entertaining modern twist on the murder mystery thriller, but also a compelling reflexive take on Internet interconnectedness and family.

Debuting at the 2018 Sundance Film Festival, Searching revolves around David Kim (played by John Cho of the Harold & Kumar series and Star Trek), looking for his missing 16-year-old daughter. After 37 hours with no lead and no help from the local investigator (Debra Messing of Will & Grace fame), David decides to take the investigation into his own hands by looking through his daughter’s laptop to digitally retrace her last steps. At the festival, the film was the recipient of the Sundance 2018 NEXT Audience Award and the Alfred P. Sloan Feature Film Prize—which recognizes an outstanding film focusing on science or technology.

Described by director/co-screenwriter Chaganty as a “classic thriller told in an unconventional way,” Searching is indeed an unconventional film masked in the familiar lens of everyday electronic devices. However, more than just another film with a gimmick, Searching manages to utilize its hypermodern point of view to produce a stirring defamiliarization of modern technology and the role it plays in modern-day parenting, grief and self-expression. Rather than making me want to check my Facebook, it makes me want to check up on my mom.

Two weeks after showcasing their film at the Music Box Theatre for the Chicago Critics Film Festival, Chaganty and co-screenwriter/producer Ohanian sat down with The Maroon to discuss the creative process behind Searching and their future projects together.

The Chicago Maroon: What was the creative process like during the screenwriting stage of the film?

Aneesh Chaganty: It took a long time before we finally figured out the story we were going to write. Our early drafts were nothing like what ended up on screen. We had an early version of the film that was more like Taken and another version that had a sex cult going on.

Sev Ohanian: Because of our busy work schedules, a lot of our writing was done at night, sometimes while we were in different cities. I’ve worked with people before who have a very clear outline of what they wanted to make but with Aneesh it was just many late nights of constant pitching of ideas and trying to chisel those ideas into a cohesive story. In fact, Aneesh would do this thing where he would rewrite the same information over and over. I would write something on a whiteboard and then he’d go and type what I had written onto a Google Drive file and then take that and transfer it onto an Excel spreadsheet. And it was the same thing written each time, just through all these different filters.

AC: What? I don’t remember that. [laughs]

CM: At the heart of this film is a very strong detective drama in which the father David uses social media to become a sort of hard-boiled detective searching for his missing daughter. What sort of films or detective stories did you rely on to make this film?

AC: We looked at a lot of missing child/ransom stories, studying their various story beats to see what worked and what didn’t work. We didn’t just look at films either, we also looked at video games and podcasts, too. The Serial podcast was actually a huge influence for us.

CM: Speaking of video games, did you guys play Heavy Rain at all? Because all I could think about while watching the film was replaying that game based on how similar the two seemed.

SO: Oh my god I had totally forgotten about Heavy Rain! Yes! Heavy Rain was a huge influence for us, especially because as you know based on the video game’s twist. Man, now I wish I could redo every interview just so I could talk about Heavy Rain. [laughs]

CM: My favorite image from the film is a close-up of the Windows XP screensaver. At first, you have no idea what it is—it’s just a beautiful shot of a burst of color. And then once you do, it takes you completely by surprise. How did you find this hidden beauty in the most banal aspects of the PC?

AC: Honestly, we just opened our laptops and looked at everything. We tried to look for the underlying emotions in each action on the computer. We asked ourselves, what does it mean to close a window? To open a new folder? To click save? And then we’d map these actions onto story beats within the film. Like for instance, emptying a trash bin felt to us like something that should definitely happen at the end of the second act. So that’s why in the movie when we see David empty his trash bin on his computer, it’s this very important point in the story where his overwhelming guilt over his missing daughter makes him feel like a failed father.

CM: There seems to be this warring conflict between the interconnectedness of social media and the interconnectedness of family. The lead investigator asks David to tell her the only thing a parent would know: who his daughter’s friends are. And yet, David is completely at a loss, relying on social media to find out who his daughter talks to. In this instance, the film seems to portray social media as a big brother archetypal figure that knows more about a child than a parent does. How did you come up with this idea and how did it structure your film?

AC: Wow. Yeah, not going to lie, that is not something we thought about when making the film. But it definitely works. Thinking back on it, I totally see how you could come up with that conclusion of social media as a big brother but it’s not something we initially tried to set out to do. When we were writing the film, our biggest guiding principle was this idea where in a world where everything is so connected, a father and a daughter are disconnected.

CM: This film is going to draw a lot of comparisons to Unfriended due its similar use of single-screen suspense. Were you inspired by Unfriended at all, and if so, how did you want to differentiate your film so as to not replicate or remake it?

SO: We actually hadn’t seen Unfriended before we started making Searching. We initially pitched Searching as a short film, and then our production company [Baselevs Company], which also produced Unfriended, liked it so much they asked for a feature…. In many ways, our film is nothing like Unfriended. That film is a horror/found footage film that all takes place on one computer screen. What we pitched, and what we were envisioning for our film, was something much more cinematic. We wanted to make a sprawling, crime detective drama that took place over 12 years and over several screens.

CM: Sev, this year you won the Sundance’s Narrative Producers Award after having produced four films that have competed at the festival, including Ryan Coogler’s Fruitvale Station. Obviously, you seem to be doing something right. Now that you’re a festival regular, can you tell us more about your experience running laps in the Sundance circuit and what this award means to you?

SO: Well, as a producer I feel like I don’t necessarily have a brand attached to my name. Systematically, I try to work on films as different as possible. Working on Ryan’s film [Fruitvale Station] was totally different than working on this film, and yet I ended up working with two first-time directors who had the same energy, passion, and understanding of story. And yet, there’s no guarantee that you’re going to get into Sundance. With Fruitvale Station, I didn’t have a clue what was going on. I didn’t know who I should be talking to or what I should be doing at the festival. And now, with this crew, I’m the experienced one shepherding Aneesh and everyone around. It’s a satisfying full circle. And to be receiving the Narrative Producers Award this year is very special to me, because it means Sundance has been paying attention to me throughout the years and believes in my work. It’s very empowering for me. I’m just going to keep on doing what I’ve been doing and see where it takes me.

CM: So now that you two are done Searching, what’s next?

AC: We actually just finished our next project together a few weeks ago. We’ve been working on it in the edit room since Sundance, and now we’re ready to move on to the next stage, which is finding a home [distributor] for it. It’s going to be another thriller, another parent-and-missing-child case, but this time minus the tech. And that’s about all we can say about it for right now.

SO: Well, I guess we could at least tell them the title, right?

AC: Yeah, I guess you’re right. Run! There you go, that’s the title. That’s something we haven’t told any of the other media outlets. An exclusive for The Maroon. [laughs]

An earlier title misnamed Chaganty and Ohanian as both directors of the film; they are co-writers.