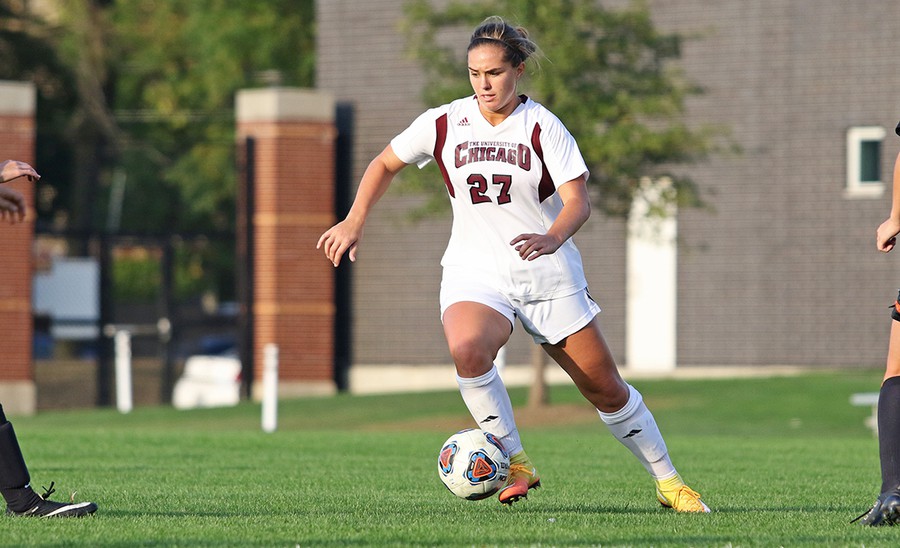 Calamari dribbling the ball for the Maroons.

Fourth-year Mia Calamari finished her collegiate soccer career this past season, leaving a legacy on and off the field (and a few school records) along the way.

Since her second-year, Calamari has been a constant for the team in the midfield, starting the past 67 games for the Maroons over the past three season, plus 16 out of 21 in her first year. Over her 88 total games played, Calamari totaled 16 goals, a .431 shot-on-goal percentage, and 90 points, putting her at third all-time on the University of Chicago records list.

Calamari is a facilitator. From the very beginning of her career, Calamari’s adept vision and accurate passing skills have set her teammates up for numerous goals, helping the Maroons to a second-place finish in the NCAA Division III Championship in her fourth year.

Throughout her time on the soccer team, Calamari pushed both her teammates and herself to continue getting better. Striving to improve each year, Calamari broke UChicago’s assists on the season record three times, two of which she set herself. This past season, Calamari set a new school record for assists with a total of 18, which ranked second in all of DIII. Calamari smashed her previous single-season record of 15 assists that she set in 2015, putting her career total at 58 assists, the all-time school record. Calamari’s talent was also recognized across the soccer community, as she came in second in a poll for which DIII soccer player is best at assists with a whopping 36,362 votes.

When asked about one of her favorite moments in her time at UChicago, Calamari said, “My four years as a Maroon on the women’s soccer team were filled with amazing memories, and I have my teammates and coaches to thank for that. One of my favorite memories was beating Pomona-Pitzer in 2016 in order to advance to the NCAA Final Four. We tied up the game with about two minutes left to play. We stayed tied through both overtime periods and eventually won in PKs. It was one of the most rewarding games I’ve ever played in my life.”

Outside of being a star on the soccer field, Calamari was heavily involved on campus and in the surrounding community. Calamari volunteered as a mentor for MoneyThink, a non-profit organization that aims to increase the financial capability of American youth by training college volunteers to serve as financial mentors for low-income high school students. In her free time, Calamari helped others pursue their soccer dreams, working as a soccer coach at the Johnson School of Excellence and the UChicago Lab Schools. Calamari is also a member of Delta Gamma. Having majored in public policy, Calamari will be working at Chapin Hall, a policy research organization focused on youth and family policy, as a research and communications project assistant.

First-year Katie Jasminski reflected on the strong presence Calamari had in school and on the field, saying, “Mia was a great leader on our team. Everyone respected her, but not just for school or soccer. How much she cared was obvious in everything she did. She has an amazing personality, and losing that presence is going to leave a huge hole in our team that will be really hard, even impossible, to replace.”

Jasminki’s sentiments were echoed by fourth-year Kelsey Moore. “Mia Calamari is a fiercely loyal friend, an unbelievably entertaining player to watch, and is the type of player who puts her entire heart out on the field. For the past two years, I played behind Mia as the defensive mid to her attacking mid. Every time I stepped on the field, I knew Mia would play her absolute hardest. She loves this sport more than anyone, and it would show through how hard she played. She is a record-breaking player and has left a legacy that has made an unbelievable impact on this program.”

Calamari will graduate and leave Hyde Park this June after helping lead the women’s soccer team to national prominence and a dominant four-year stretch. Her presence will surely be missed by the team next year.