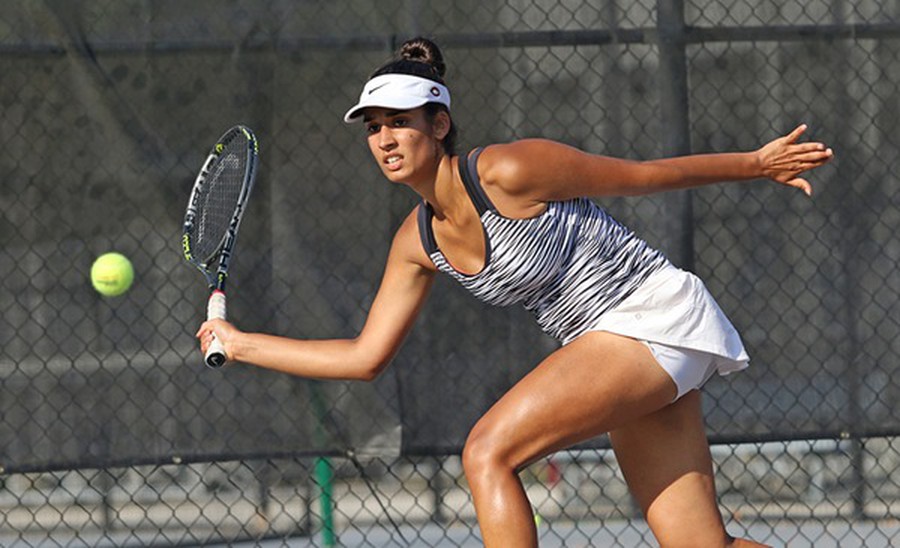 First-year Claire Handa keeps her eye on the ball as she swings the tennis racket.

It should come as no surprise that Claire Handa is receiving the Female Rookie of the Year award. Handa made her name known in her first year of inter-collegiate play. The women’s tennis team put forth another stellar year finishing 19–5 and making a NCAA tournament run before being eliminated by No. 1 seeded Emory. Much of this year’s success came at the hands of first year Handa and her flawless transition from high school dominance to collegiate dominance.

The first-year from Rockville Center, New York established herself as the team’s clear-cut No. 1 in both singles and doubles. Although this is an impressive feat for a first-year, Handa was not done opening eyes just yet. She pieced together a season to remember: ITA All-American in singles, an NCAA nationals qualification in both singles and doubles, first-team All-UAA honors in both singles and doubles, and UAA athlete of the week recognition on four occasions (Oct. 2, Feb. 12, Feb. 19, and Apr. 9).  The rewards are backed by tremendous performances such as her victory at the ITA central region championship and fourth place finish at the ITA Oracle Cup. All in all, the first-year, four-star recruit not only lived up to her expectations—she shattered them.