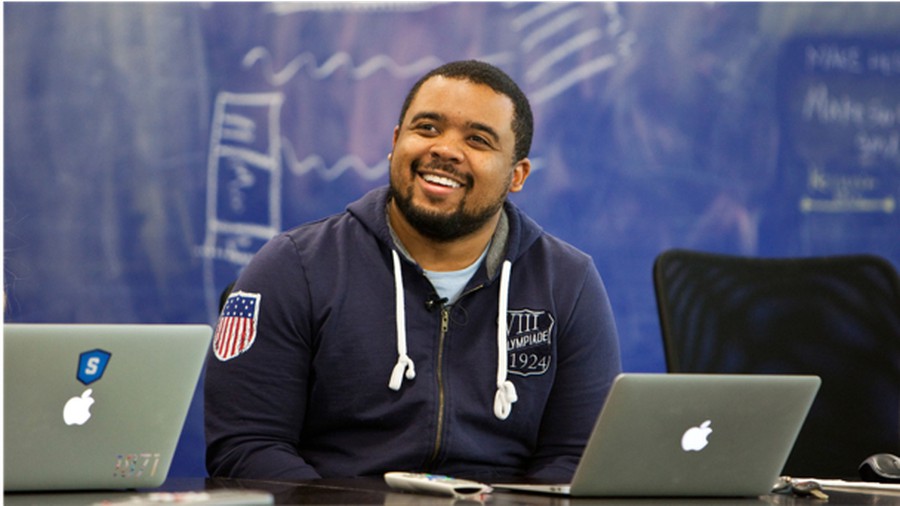 At his first campaign rally in April, Neal Sáles-Griffin repeated phrases about “getting real” and expressed that he was “vulnerable” and “scared.” He apologized to the attendees, and admitted that he had “bombed this speech.”

Sáles-Griffin is the CEO of CodeNow, a non-profit program that teaches coding to high school students, an adjunct professor of engineering at Northwestern University, and a faculty coach at the Booth School of Business.

Last month, he declared his candidacy for mayor of Chicago, running on a platform of term limits for the mayor’s office, campaign finance reform, and full budget transparency.

He is running against nine other candidates, including the incumbent mayor Rahm Emanuel, former superintendent of the Chicago Police Department Garry McCarthy, and former Chicago Police Board president Lori Lightfoot. The three candidates are leading the pack in campaign donations so far.

Unlike several of the candidates, Sáles-Griffin has never served in a public position or in a publicly elected office.

Despite the lack of funding and experience, and despite the missteps in his first rally, Sáles-Griffin has continued to campaign and persist in the race for mayor.

The Maroon sat down with Sáles-Griffin to discuss his background and campaign.

Sáles-Griffin grew up in Kenwood and Hyde Park, where he attended local schools, including St. Thomas the Apostle School and Mount Carmel High School.

After graduating from Northwestern University, where he served as Associated Student Government President, Sáles-Griffin founded Code Academy, a coding boot camp for students from all over the world, which later changed its name to The Starter League. After selling The Starter League to FullStack Academy in 2016, Sales-Griffin joined CodeNow.

Sales-Griffin’s tech background has granted him networks that have carried over into his developing mayoral campaign. Jason Fried, the CEO of Basecamp, a Chicago-based tech company, has been one of the biggest contributors to Unite Chicago PAC, which has donated almost $50,000 to Sáles-Griffin’s campaign.

The PAC was co-created by Max Temkin, the co-creator of Cards Against Humanity and a University of Chicago alum.

Running for mayor wasn’t always the plan, according to Sáles-Griffin. But when he started thinking about the issues facing Chicago, he discovered he had the experiences and background to make an impact in government.

One of the main issues that motivated his candidacy was Chicago’s shrinking population.

“When I made the connection between all of my friends and family members and many other Chicagoans moving away, and connected it with what I could do about it—when it came to business, leadership in work, as a teacher...my role as a non-profit leader—and all the different Chicago activities I have my hand in and could be a part of, government was the biggest way to make a difference.”

He then asked himself what he could do in government, and finally identified running for mayor as the best option. “I laid out all the problems, I dove straight into the root system cause, and that happened to be concentrated in the Mayor’s Office.”

“We need expiration dates on politicians, we need to remove money from politics to the best of our ability, and we need a radically transparent budget so everybody knows where their money is going,” he said.

Unlike other large cities such as New York City and Los Angeles, Chicago does not set term limits for mayors. Richard J. Daley served for six terms, from 1955–1976, and his son, Richard M. Daley, also served six terms from 1989–2011.

Sáles-Griffin has committed himself to serving only two terms if elected to office.

When asked about details regarding his plans for term limits, Sáles-Griffin said, “New York City’s term limits laws for its mayor would be a good start for Chicago, but Chicago has its own unique challenges and nuances that I’m working through first.” He did not provide further details.

Campaign finance reform is another policy focus for Sáles-Griffin, and he said that he will propose specific changes when his full platform is released. However, he has already suggested some changes on his campaign website.

His campaign’s donation page states that people who donate to his campaign will not receive undisclosed private and secretive meetings with Sáles-Griffin, political favors, handouts, contracts, or positions.

Budget transparency is the last major policy of Sáles-Griffin’s campaign, and his solution will draw upon his background in tech. While the City maintains interactive budget graphics, tables, and reports online, Sáles-Griffin says he believes that the current website is not fully transparent.

“The current online resources in the city of Chicago are not citizen focused or friendly. The city budget reports and online resources are not accessible or easily digestible for everyday Chicagoans. There are many line items and data points that are tucked away in dense PDFs and lack clarity around who decides what funds get allocated where.”

His campaign is working to create a digital budget model that would “go beyond PDF reports, and spell out more holistically and accessibly what money goes where and for what reason.”

An example of this tool can be found on his website.

Sáles-Griffin’s campaign differs in context from many of the other candidates. McCarthy’s campaign highlights finance, crime, and education, while Lightfoot’s campaign stresses schools, public safety, neighborhood development, and equity and inclusion.

Sáles-Griffin said that these more traditional campaign issues will also be a part of his campaign, and he emphasized that he is aware of other important issues facing the city.

He also said that in addition to the funds being invested in neighborhoods’ infrastructure and commercial activity, there should also be more resources dedicated to supporting residents themselves, noting Hyde Park as an example.

He said that while in Hyde Park “there are more shops and stores and people...there is also a major, major discomfort for people who feel like they’re being edged out or priced out”

Sáles-Griffin said he still believes in prioritizing his three main campaign issues. “If we aren't dealing with the root of issue of money, power, and ego that’s fueling a lot of the corruption in Chicago, then we’re still in trouble.”

“No candidate is talking about [these three major campaign points]” he said, “because polling-wise or focus group wise it’s not going to resonate with voters, but I don’t care—I’ll find a way to make it resonate.”

The article's headline was originally "Non-Profit CEO Announces Mayoral Candidacy," but was changed to reflect the content of the article. Neal Sáles-Griffin was not announcing his candidacy in this article.

College Alum Is One of the Youngest Candidates Running for Mayor