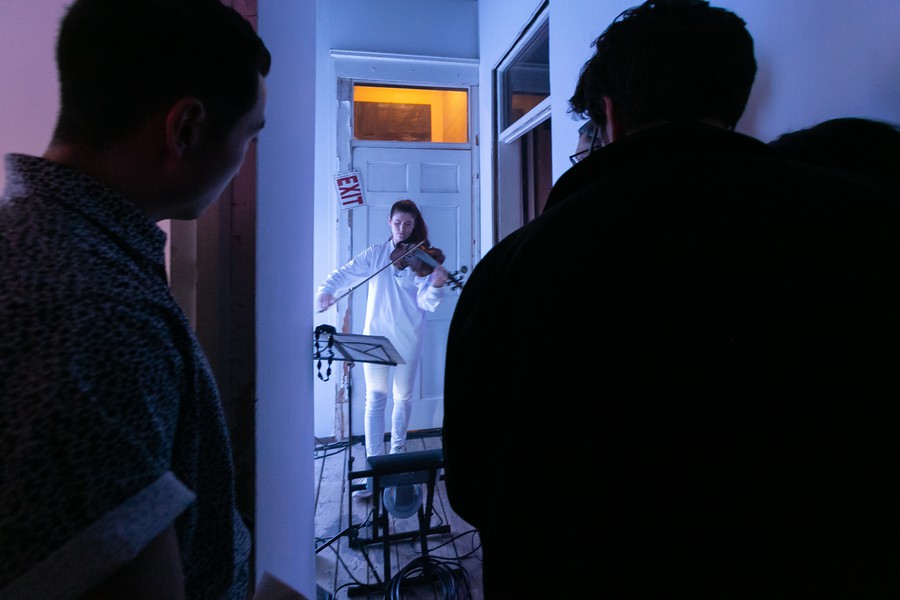 Listeners wander through the exhibition space, a home-cum-gallery organized by Tricia Van Eck, once a curator at the Museum of Contemporary Art.

Soundscapes of Color, a contemporary opera composed by fourth-year Michal Dzitko, made its Chicago debut on April 22. Both his B.A. project and a commissioned artwork two years in the making, the piece reinterprets the 1874 typography catalog “Specimens of Chromatic Wood Type” as a libretto.  It explodes conventional operatic staging by scattering performers throughout the venue and liberating the audience from their seats into the performance space. Held at experimental art space 6018 North, the show was preceded by a reception and discussion moderated by Associate Professor of Music Steven Rings. 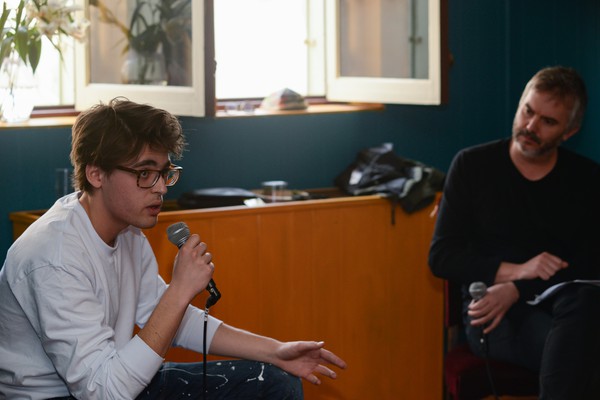 The composer Michal Dzitko (left) with Steven Rings, an Associate Professor of Music at the College.

The project all started when Dzitko, a year after releasing his first album Bokeh in 2015, was working as a business consultant for Purgatory Pie Press, run by author Esther K. Smith and her husband, Dikko Faust. When Smith came across the wood type manuscript for the first time, she was fascinated by its near-operatic “over-the-top-ness” and commissioned Dzitko to compose an opera around it.

To adapt “Specimens” as a libretto, a narrative that tells the story of a musical work, seemed at first to be an impossible notion. No logic, let alone chronology, ties any of the typography book’s verbal contents together. Its meaningfulness lies in the formal qualities of the words rather than their denotations. Taken as they are, the words seem to form a surrealist poem comparable to those of Gertrude Stein, featuring word combinations like “handsome picture/ dark forests/ radiance/ mosaic.” Yet Dzitko uses the text’s poetic quality to his advantage; vocalists sing the nonsensical phrases aloud in performance, and, as Smith explained, the listener is able to ascribe any number of meanings to the ambiguous words. 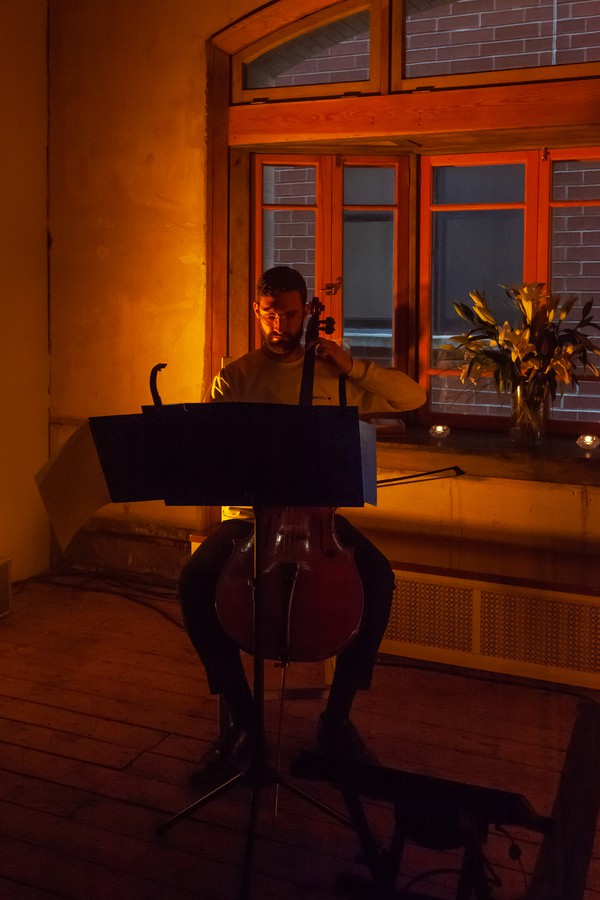 Musicians wore white shirts, distinguishing them from the audience and making them canvasses for Dzitko's dramatic colors.

Indeed, Dzitko’s work combines sound, space, and color to create an interactive and multi-sensory experience in which the listener, as opposed to the actor, is the protagonist. By composing based on the associative symbolism of colors, Dzitko reverses the usual relationship between actors and orchestra in an opera such that the music no longer reflects the action onstage, but instead shapes it.

"A plot was one dimension we were missing, and the idea of substituting in the dimension of space appeared as one great solution," recounted Dzitko."

6018 North provided the perfect venue for Dzitko’s creativity—it added a certain spatiality and materiality to Soundscapes of Color that became quintessential to the work. Since its inception five years ago, the space has been run by former Museum of Contemporary Art Assistant Curator Tricia Van Eck, who transformed the decrepit house into a home for multidisciplinary artistic collaboration while preserving its beautifully aged appearance and historical significance. In addition to the University and his commissioners, Dzitko is grateful for the support Van Eck provided for his project.  “It honestly happened because many people believed in this,” said Dzitko. 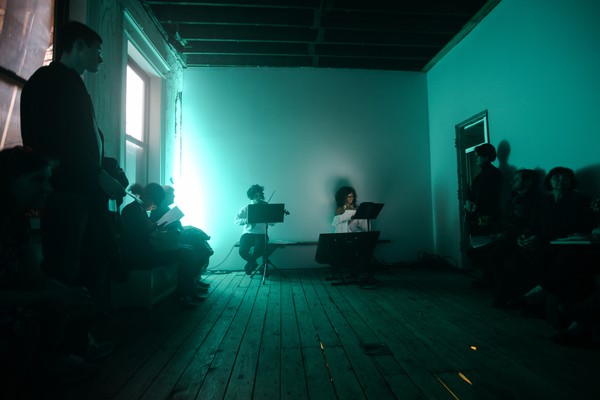 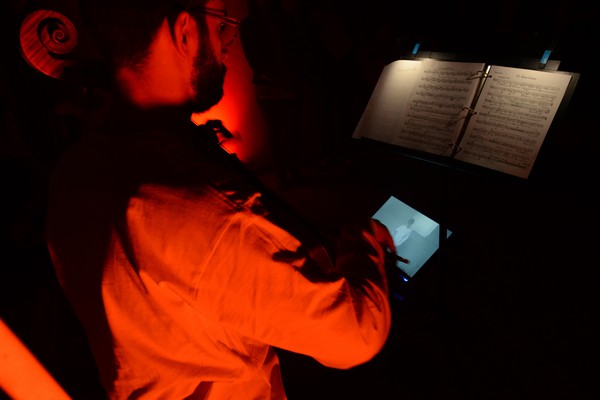 Musicians performed alone or in small groups, tracking the score mostly on their own.

With three floors, secret rooms, and vestiges of past exhibits, 6018 North staged a perfect segmentation of the traditional operatic orchestra into its individual components. Working with lighting designers, Dzitko further transmuted the space into an ethereal world of color. With an alto stationed in a crystalline teal closet and a trombonist in an emerald room with half of its floor missing, all that united the performers was a series of screens displaying the hidden conductor leading them. Given the dampening effects of the large crowd, performers could neither see nor hear one another. Tampering with this concept of remote conducting facilitated the audience’s movement throughout the space, allowing each individual to uniquely carve their way through sound, light, and space.

Dzitko’s novel staging created infinite experiences and soundscapes within a single performance. As a result, attending the show is almost existentially dizzying, although otherwise quite aesthetically engaging. Walking through the rooms, one might stumble upon a particularly intense moment, such as a soprano singing vehemently in a corner bathed in bright red.  “I prefer this to traditional opera because I’m past the point of being educated by a story,” reflected an attendee after the show.

Distributed among the nooks and crannies of 6018, performers were dressed in white shirts with their musical roles printed on them. The uniforms distinguished them from the audience but also de-characterized them, reinforcing the fact that they drove no plot, acting only as vehicles through which the listener may construct their own personal narrative.

Fashion is among Dzitko’s interests outside of music, though he is not blind to the intersections between the two art forms. The spirit of “copying and repurposing,” which lies at the heart of hip-hop and streetwear, formed the artistic scaffolding of this very project; writing the opera not only involved repurposing a typography catalog into a libretto, but also the recycling of other musical materials. These materials ranged from traditional Polish folk tunes and Franz Liszt’s “La Lugubre Gondola” to a chord progression from Kendrick Lamar’s “How Much a Dollar Cost” and even Kanye West’s “Wolves,” which is itself a remodeling of borrowed material.

“The best things come with time,” reflected Dzitko on his two year-long project. “I think we did exactly what we were trying to do.” Some potential commissioners even approached him at the end to inquire about possible collaborations. Dzitko looks forward to more ambitious iterations of the show, as well as pursuing new projects in the future.

Despite the etymological ambiguity of the word “chromatic,” the fact that the Ancient Greeks devised a word suited both to the harmonies of music and the tonalities of the visual arts might point to a deeper connection between the two. It is this synesthetic audio-visual relation which Dzitko evokes in Soundscapes of Color, doing so in such a way that dismantles the operatic stage and grants the viewer the agency to chart their own course across infinitely variegated soundscapes.

Dzitko will be presenting at the TEDx Conference on Saturday, May 5th.