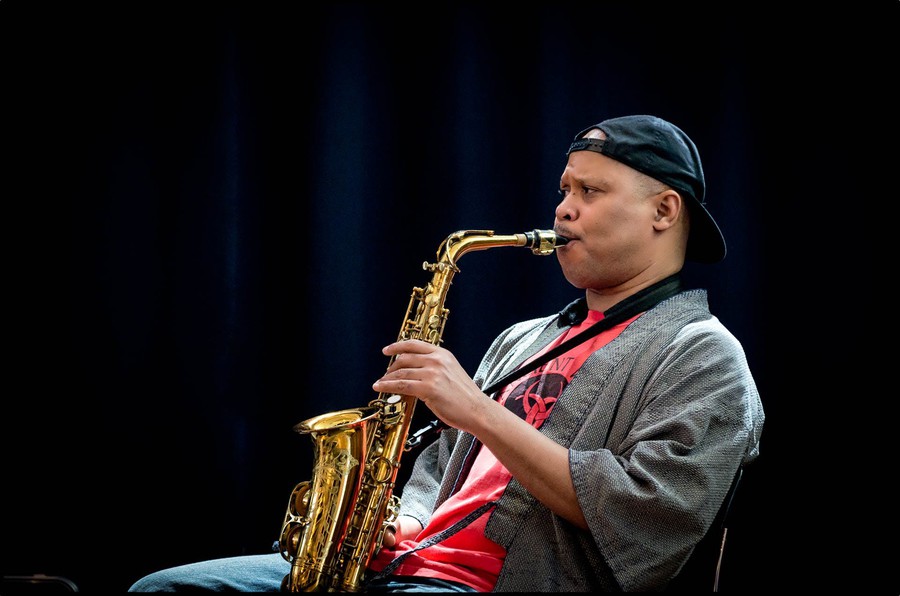 The Jesse L. Rosenberger Medal is awarded irregularly by the University to someone who has created work “deemed of great benefit to humanity.” This year’s winner and the 53rd recipient of this award is the unconventional saxophonist Steve Coleman, who gave an acceptance lecture and performance last Sunday at the Logan Center. The Rosenberger Medal will be his latest in a long line of awards, which include the coveted MacArthur “Genius Grant.”

The word “genius,” like many other superlatives, seems apt for Mr. Coleman, who plays masterfully and, as his lecture revealed, has a unique vision of what music is and what it can do.

His lecture was titled “The Eagle and the Lark,” which was also the name of the story with which he opened his talk.

Coleman aims for his audience to experience a relationship between logic and intuition. For him, rhythm and tone, two things we normally view as separate, are not physically different. Tapping a pencil in 4/4 time sounds like a rhythm, but if you speed up the tapping enough, it will start to sound like a tone. And although humans intuitively grasp the two as different, Coleman is inspired by the fact that they emerge from the same phenomenon.

While this is certainly very heady, Coleman’s dedication to teaching extends beyond the highly conceptual and into the realm of community work: wherever the band goes, they engage in work with the community. Most recently, this meant a partnership with the Chicago-based organization Free Write, which offers “tutoring and workshops in creative writing, visual art, music production, and workforce development for incarcerated youth.” Through Free Write, Coleman hopes to introduce children to new opportunities and expand their imaginations, increasing the possible paths they envision for themselves.

Before giving his Rosenberger lecture, Coleman and his band, Five Elements, played three improvised songs over the course of an hour; the result, as one audience member put it, was “the sound of a brain at work.” Each band member was free to work in their own time signature and to choose any tonal or rhythmic direction while lyricist Kokayi rapped freestyle and drummer Sean Rickman played an anchoring rhythm. It was meditative and frequently disorienting, yet somehow never chaotic.

For Coleman, what holds his band’s sound together, remaining unconventional but not incoherent, is years of practice. As they played, those years of practice allowed the musicians to provide new kinds of order while breaking down expected ones. By the end of the night, it became clear that Coleman is working to give his audiences a new relationship to sound. This is, to be sure, not the sort of thing the average saxophonist attempts. Mr. Coleman himself has admitted that he’s “not trying to win any Grammys.” But for this kind of work, and for his community outreach, he certainly fits the bill for the Rosenberger Medal—an artist “of great benefit to humanity.”