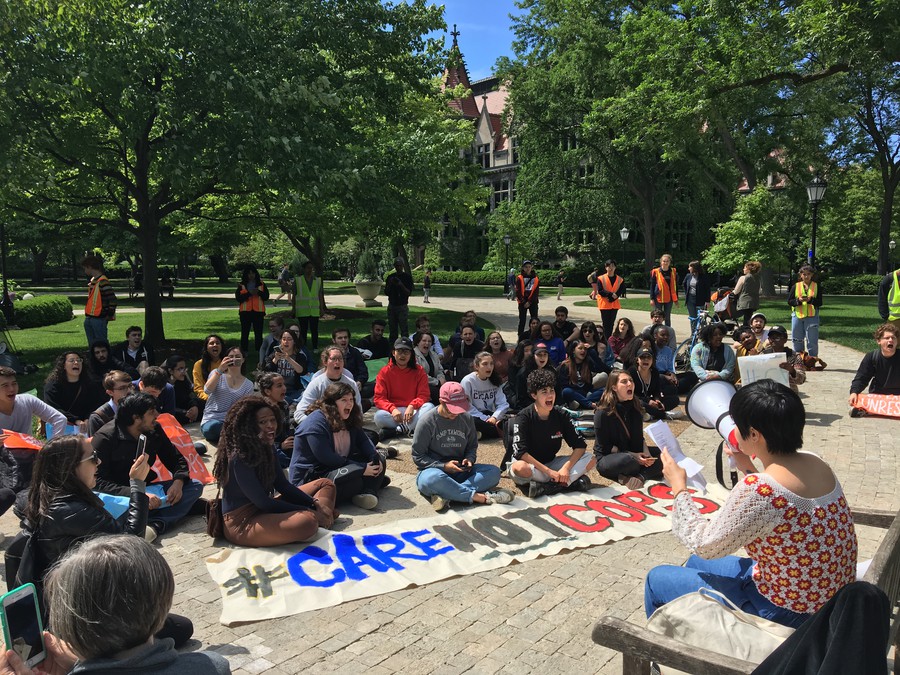 Alumni watched from the Baderbräu Beer Garden as about 100 student protesters marched toward Alumni Weekend celebrations on Friday afternoon.

Near the white tents set up on the east end of the main quad for Alumni Weekend, the protesters assembled five smaller tents of their own and sat down on the cobblestones directly adjacent to the impromptu tap house. Protesters plan to spend the night on the quad.

Organized by campus activists groups UChicago Student Action (UCSA) and UChicago United (UC United) under the collective #CareNotCops, the protest aims to engage Provost Daniel Diermeier in talks about a list of demands written in response to unsatisfactory student encounters with the UCPD and SCS, and particularly regarding the shooting of fourth-year Charles Thomasby UCPD Officer Nicholas Twardak in April.

The demands include greater transparency from the UCPD, the creation of an Independent Review Committee directed and appointed by members of the South Side community, and more culturally diverse SCS staff, among other items.(The members of the University’s current Independent Review Committeeare appointed by Provost Diermeier.)

“There are three psychiatrists on the staff at the SCS,” second-year and Fair Budget UChicago member Julia Attie told *The Maroon*during the protest. “Other universities like Harvard have about 10, so we are severely understaffed in our comparison to peer institutions. An institution that funds one of the largest police forces in the world definitely has the money to fund larger SCS services.”

Attie also told the crowd she had to wait two months to receive a psychiatric evaluation, a delay that “drastically worsened” her first year at the college.

The demonstration began shortly after 2 p.m. in front of Alumni House on Woodlawn Avenue, where members of UCSA and UC United distributed fliers and posters to a growing crowd of students.

Headed by groups of students carrying two large banners reading “#CareNotCops” and “UofC Kills,” the group proceeded down 56th Street towards University Avenue, where their route was cordoned off from passing traffic by marshals in orange-and-yellow vests.

The students reached Cobb Gate about 10 minutes later, where they met fellow student protestors surreptitiously setting up tents at the center of the quad. There, standing on a bench in front of the group, representatives of various campus- and city-based activist groups addressed the demonstrators.

“We know that the UCPD, as one of the largest police forces, is held to entirely inadequate standards of transparency and accountability, and that our efforts to challenge their authority and ensure our own safety have been repeatedly blocked by the University of Chicago,” said first-year Janelle Hartley, a representative from Students Working Against Prisons (SWAP), a prison abolition group.

“And we know that the suppression of the student and community voices and indifference towards UCPD brutality can only continue to result in atrocities like what happened to Charles [Thomas],” Hartley continued.

The protest then moved across the quad, directly outside of the Baderbräu Beer Garden, where protesters plan to spend the night. The last event is scheduled to take place on 10 a.m. Saturday morning.

“We want to create a positive community space—we’re going to have food, music, teach-ins, and basically be a place for students to come study if they want to, because it’s finals week,” Attie said.

Attie cited the #LetUsBreath collective, which occupied the historic Homan Square in North Lawndale for 41 days in response to the shooting of Mike Brown in Ferguson, Missouri, as an inspiration for the event’s strategy of occupation. Damon Williams, a representative of the #LetUsBreath collective, spoke about how the occupation eventually became a day-care center for local children, and provided books, clothes, and food to the surrounding community.

Alumni had mixed reactions to the proceedings, and many were uncertain about what students were demonstrating about.

“I’m not even certain what the issue is,” said Bob Mitchell (A.B. ’68). “Why violate other people’s opportunity to have a nice time?”

Mitchell had not heard of Charles Thomas, and speculated the protest had something to do with “how the University was killing people.”

Nicos Tsatsoulis (A.B. ’88, M.B.A ‘89) also expressed unfamiliarity with the protest’s cause, and speculated that the protest “had something to do with the Odyssey scholarship.”

“It sounds very familiar to me, coming from Greece. It’s a leftist kind of protest,” said Mr. Tsatsoulis.

CJ Hoke (A.B. ’13) said she had heard of the Thomas shooting, but also assumed that Thomas had passed away, after reading the banner that says, “UofC Kills.” Thomas was hospitalized after the shooting, but did not pass away.

“I guess there’s a little bit of misinformation going around about what happened to the student,” Hoke said. “I think we’re [UC alumni] concerned and really want to make sure that the UCPD are supporting the student community and not an active force against them. I think the point of the UCPD is to protect students,” she added.

Attie said she is confident the demonstration is the best way to get the University’s attention.