University Turns to Grants and Outside Landlords as Enrollment Strains Housing

To accommodate the large Class of 2022, returning students have been offered a financial incentive to live in a private apartment complex near campus. 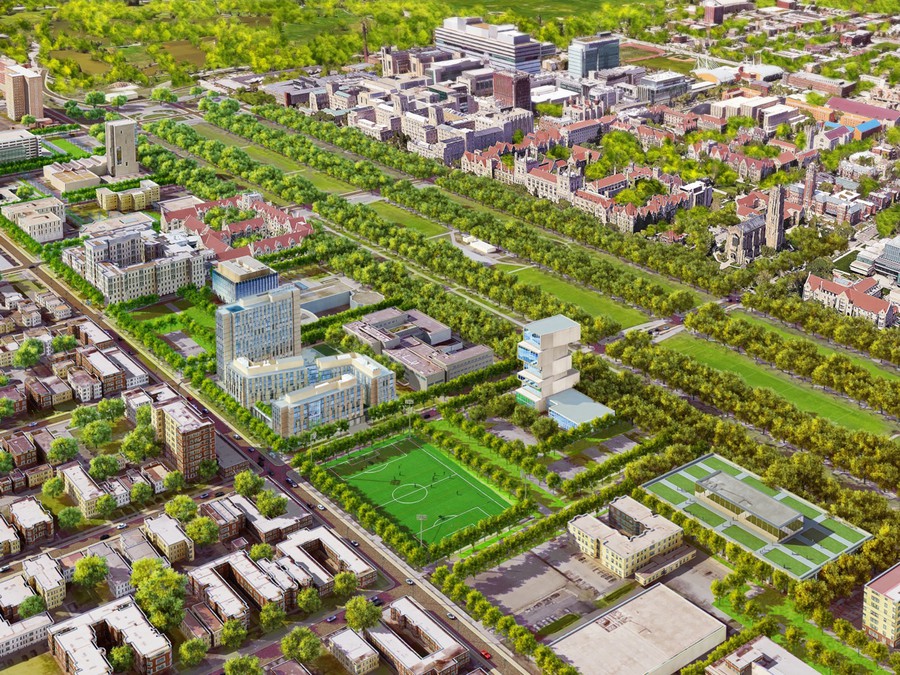 A rendering of the new dorm, which will sit just north of 61st Street between University and Woodlawn Avenues.

The University once again faces a housing shortage after an unprecedented high yield increased the incoming class size to exceed the residence halls’ capacity.

To accommodate the large Class of 2022, rising second-, third-, and fourth-years have been offered a financial incentive to leave campus housing and live in Vue53, an apartment complex near campus.

Thirty students will receive a $1,500 grant in exchange for moving into the apartment complex, Marielle Sainvilus, a spokesperson for the University, told The Maroon. The grant will be applied toward students’ tuition, in addition to any financial aid.

The University has been expanding housing and enrollment for several years, most recently announcing the construction of a new residential and dining complex south of the Midway that would house about 1,200 students. Until that dorm opens, housing availability may continue to be tight.

Last year, the University struggled to accommodate the incoming class, and opted to create the first “Vue House,” a temporary house officially counted as part of Campus North Residential Commons. Over 100 returning students elected to live in Vue House last year, freeing their spots in the University’s traditional dorms.

This is the first time that students have been offered a financial incentive to move into the apartment complex.

The University declined The Maroon’s request to confirm the size of the incoming class for this story. However, administrators’ comments suggest that it will be a historically large group.

In a June interview in New York, President Robert Zimmer told columnist Bari Weiss that the yield rate for the incoming class was “close to 80%.”

The Maroon previously confirmed with a University spokesperson that the University admitted 2,329 students to the Class of 2022.

The housing shortage has affected students beyond the creation of an interim dorm.

Jordan Cooper, a second-year student who has written in The Maroon about frustrating dealings with the administration as a student on a leave of absence, received an e-mail telling him he would not be housed on campus.

The University offered to connect him with Vue53 or Mac Properties agents, but Cooper opted to find his own apartment independently. The University did not give him the option to participate in the Vue53 housing initiative.

Cooper said that being barred from housing, as he returned from a leave of absence due to struggles with mental health, made him angry and sad.

“House culture was something I really liked, and I wanted to go back to something that I knew was comfortable,” he told The Maroon.

Alderman Willie Cochran hosted representatives from the University at this month’s Woodlawn community meeting on Wednesday, along with other business leaders in the area.