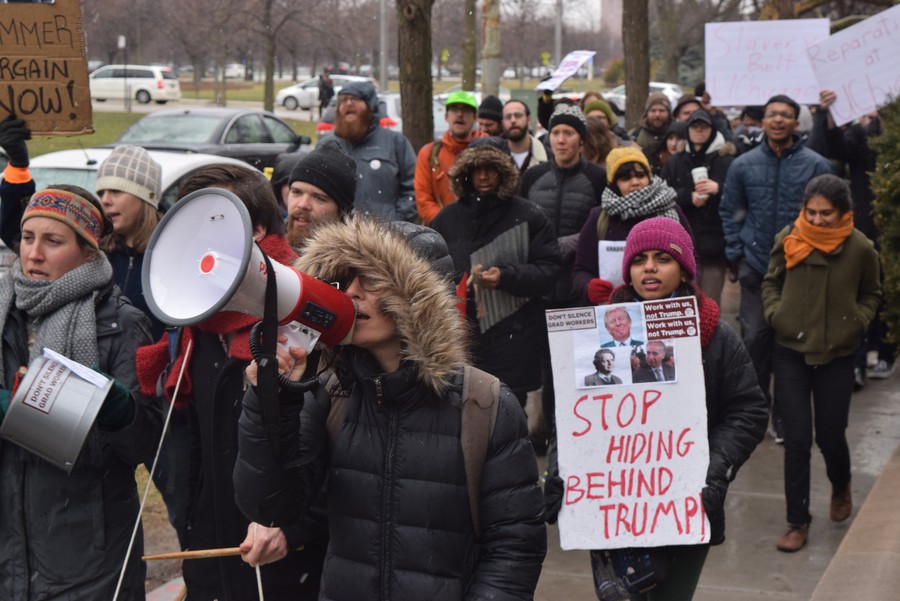 GSU members and supporters march and demand that the University bargain with the Union. They also protest against the shooting of fourth-year student Charles Thomas on Tuesday.

Student organizing at UChicago is collaborative and wide-ranging. Within the last academic year, students have agitated for increased mental health resources, higher wages for student workers, greater accountability from the administration and the University of Chicago Police Department (UCPD) to South Side residents, and more.

Below are a few groups that undergraduates can join.

Founded in 2004, UChicago Student Action (UCSA) is an established progressive bastion on campus. UCSA is a project of the People’s Lobby, a Chicago-based activist organization that describes its aims in broad terms: to “reclaim government from corporate interests.”

In step with this expansive view, recent UCSA campaigns have ranged from Fair Budget UChicago, which calls for a $15 campus-wide minimum wage and more community input on University investments, to Students for Disability Justice, which advocates for more comprehensive University disability policies and an end to forced mental health leave.

Among other demands, the protesters at the event called for increased SCS funding, greater UCPD transparency, and the creation of an Independent Review Committee of the UCPD directed by South Side community members. UCSA lists upcoming meetings, teach-ins, and rallies on its Facebook page.

UChicago United launched in May 2017 with an inaugural rally, “We Demand,” for racial equity on campus. Representatives from several multicultural student groups cited a Core curriculum disproportionately heavy on Western thought and racist fraternity incidents involving a construction-themed party held on Cinco de Mayo by Phi Delta Gamma (FIJI) and disturbing leaked e-mails written by Alpha Epsilon Pi (AEPi) brothers as examples of “exclusion that runs deep into the culture and logic of this university.”

The students presented administrators with 10 demands, including campus cultural houses, a pre-orientation program specifically for minority students, and a diversified Core curriculum. (A new Social Sciences Core sequence titled Global Society was later added and will begin this academic year; other Core classes’ syllabi have been modified to incorporate non-Western authors.)

More recently, UChicago United played a key role in protests this spring against UCPD after Thomas’s shooting, and continued to push for cultural centers in a rally this May outside the Office of Multicultural Student Affairs. The organization also co-hosted #CareNotCops.

UChicago United is the group behind this week’s Dis-Orientation 2018, a roster of events—from an LGBTQ+ mixer to “alternative academic advising”—designed to supplement and subvert official O-Week programming.

U of C Resists

Students, faculty, and staff affiliated with U of C Resists held their first meeting—dubbed “Resisting Trump: Where Do We Go From Here?”—on January 13, 2017, a week before President Donald Trump’s inauguration.

In the nearly two years since, the organization has pushed for UCPD accountability and other causes. Most notably, it was the driving force behind “No Bannon,” alongside campus groups including the UChicago chapter of the Young Democratic Socialists of America. The “No Bannon” slate of weekly protests and teach-ins in winter 2018 followed *The Maroon*’s reporting that Steve Bannon, former White House chief strategist under Trump, had accepted an invitation to speak on campus from Booth School professor Luigi Zingales.

Despite the splash it caused, the planned Bannon event—a debate with Booth School professor and former Obama adviser Austan Goolsbee—soon fell apart, with Zingales unable to make progress in scheduling the event by March. U of C Resists wrote in a statement in June, “It appears that Bannon heard our message . . . We want to thank and congratulate everyone who took part in protests, teach-ins, and other anti-Bannon actions.”

Students Organizing United with Labor (SOUL), which boasts campaigns since 2007, is a chapter of the national organization United Students Against Sweatshops.

SOUL’s activities on campus include advocacy for UChicago staff and student employees, as well as collaborations with Graduate Students United, the Student Library Employee Union, and Faculty Forward, a bargaining unit for non-tenure-track faculty.

UChicago for a CBA

UChicago for a CBA grew out of the Prayer and Action Collective, a student initiative founded in 2014 that helped advocate for a Level I trauma center at UChicago Medicine. (It opened this past May.) Today, the student group is one of a slew of South Side organizations in the Obama Community Benefits Agreement Coalition, which continues to push for a community benefits agreement—which seeks to protect low-income families from being priced out of their neighborhoods due to development projects—with the Obama Presidential Center, the City of Chicago, and the University of Chicago.

UChicago for a CBA updates its Facebook page with events.