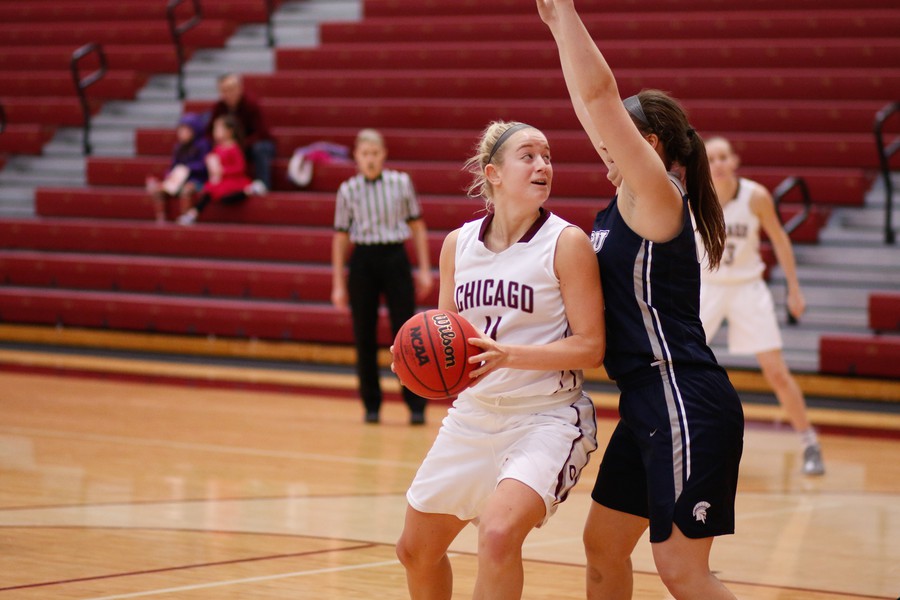 Third-year Taylor Lake glances around her opponent in search of a teammate.

An action-packed weekend of basketball pits UChicago against Rochester on Friday night and Emory on Sunday afternoon. The Maroons opened conference play on Saturday, January 5, at home where the Maroon women fell 85–66 to Wash U. For the Wash U men, a second-half rally made the game close, but ultimately the Maroon men were able to hold on to win 88–80.

First, on Friday, the No. 17 Maroon women take on unranked Rochester at 6 p.m. The Rochester women are 6–6 and opened UAA play with a 70–52 loss to Emory. This game will be their first challenge against a ranked team this season. The Maroon women were previously ranked No. 8 but fell nine places after the loss to Wash U. Wash U jumped to a 28–15 lead by the end of the first quarter and, despite pulling within two points late in the second quarter, UChicago never took the lead.

Following the women’s game, the unranked Maroon men seek to upset No. 12 Rochester at 8 p.m. The Rochester men opened UAA play with an 87–76 victory over Emory. Rochester took an early lead and was ahead by double digits for much of the game. However, despite trailing 29–12 with 10 minutes left in the first half, Emory rallied over the next nine minutes to cut the lead to three points. Rochester ultimately re-established a strong lead and was ahead by double digits for all of the final 13 minutes, eventually leading by 17 points once again with around six minutes remaining. Although Rochester added another solid score line to its list of wins, Emory’s rally, along with Rochester’s only loss of the season (85–70 to Ithaca in December) prove the team vulnerable.

On Sunday, the Maroon men face off against Emory at noon. The Emory men are 9–3, and though they lost in the aforementioned contest against Rochester, they can hardly be taken lightly. They showed enormous resolve in their attempt to come back against a highly ranked opponent. Fortunately, Emory’s final contest before its matchup against UChicago may shed more light on what the Maroons can expect on Sunday, as Emory will face Wash U on Friday night.

At 2 p.m. on Sunday, the Maroon women also take on Emory. The Emory women are 10–2 and defeated Rochester 70–52 to open conference play. While the first quarter ended 10–10, Emory was never losing by more than two points, which occurred early in the second quarter. Rochester was down 33–26 at halftime, and as the game went on, Emory steadily extended its lead. Emory never led by less than 11 points in the final 18 minutes and went ahead by 20 in the final minute.

With games on Friday at 6 p.m. and 8 p.m., and on Sunday at 12 p.m. and 2 p.m., the Maroon teams attempt to build solid starts to UAA play. The men look for an upset against highly ranked Rochester, while the ranked women seek to rebound from their loss to Wash U and push higher in the rankings toward their former spot.