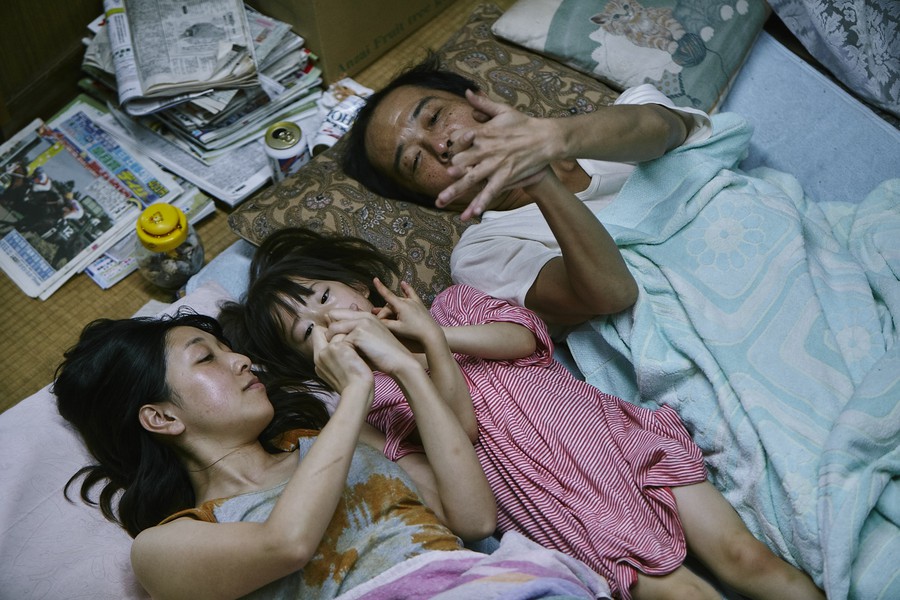 Like many great stories, Hirokazu Kore-eda’s Palme d’Or–winning movie Shoplifters makes the watcher question their own moral stances without explicitly taking its own. Shoplifters tells the story of a family, painstakingly documenting their routines: hot water bottles filled at breakfast, trips to the beach, slipping stolen shampoo into backpacks.

The story begins with Osamu (Lily Franky) and his accomplice, the 10-year-old Shota (Jyo Kairi), shoplifting at a grocery store. On the way home, they discover a little girl, hungry, freezing, and bruised. They bring her along. The lady of the house, Nobuyo (Sakura Ando), worries the girl will attract the police. When Osamu and Nobuyo send her back, they overhear her parents arguing and saying they never wanted the child. Nobuyo decides to take the little girl, Yuri, home.

The arrival of Yuri seems to only increase the house’s mundane crowdedness. Nobuyo spends most of her day working in a laundromat while Osamu soon gets injured on a construction job. Yet, the family’s most significant income is the grandmother’s pension, supplemented by pilfering. As in his other movies, Kore-eda paints a tender picture of the struggling Japanese masses. Economic stress paints over actions, unsettling to our most unquestioned civic virtues. But this is not a family lacking in values. When Nobuyo decides to bring Yuri home, Osamu asks if it counts as kidnapping. Nobuyo answers that they’re not asking for a ransom. When the grandmother dies, they bury her in the yard, continuing to collect her pension. As the stories unfold, the things that society condemns are rendered painfully justifiable.

Even in the most out-of-the-ordinary moments, Ryuto Kondo’s soft glimmering cinematography keeps the narrative composed. Before Shota steals, he performs a ritual of spinning his fingers. With astonishing maturity and skill, Kairi animates the 10-year-old character with seasoned sophistication. Shota doesn’t go to school, spending most of his days reading in a dark closet or committing petty theft. Osamu has told him the things in stores don’t belong to anyone yet, so it is okay to steal as long as the store isn’t going bankrupt. Still, his dark, pondering eyes and long silences question everything. Eventually, Shota deliberately gets caught, and sends the family into chaos.

Ando’s portrayal of Nobuyo is refreshingly honest and utterly moving. When the authorities finally investigate the family, there is a shot of her interrogation. Instead of the large rolling tears that we often see in female crying scenes, she speaks directly into the camera, as mingled tears and snot are smudged off her face with unsteady but stubborn hands. The scene has all the messiness of what crying is like in reality—an unpleasant act of fragility, an admission of defeat.

When Osamu tells Nobuyo’s sister Aki (Mayu Matsuoka) that he and Nobuyo are no longer sexually active, she asks him why they stick together. As Osamu points to his heart, Aki observes that they’re in it for money. The entire movie asks the question: Why do people hang on to each other? Do the characters really love grandma, or do they keep her merely for her pension? As it turns out, almost every adult in the household has “private” motives; yet, it seems impossible to believe the loving family is merely an illusion, a painted front to hide a darker selfishness.

Shoplifters muffles the line between outrageous and tender, leading us to stare into the abyss between what society deems ought to be, and what really is.