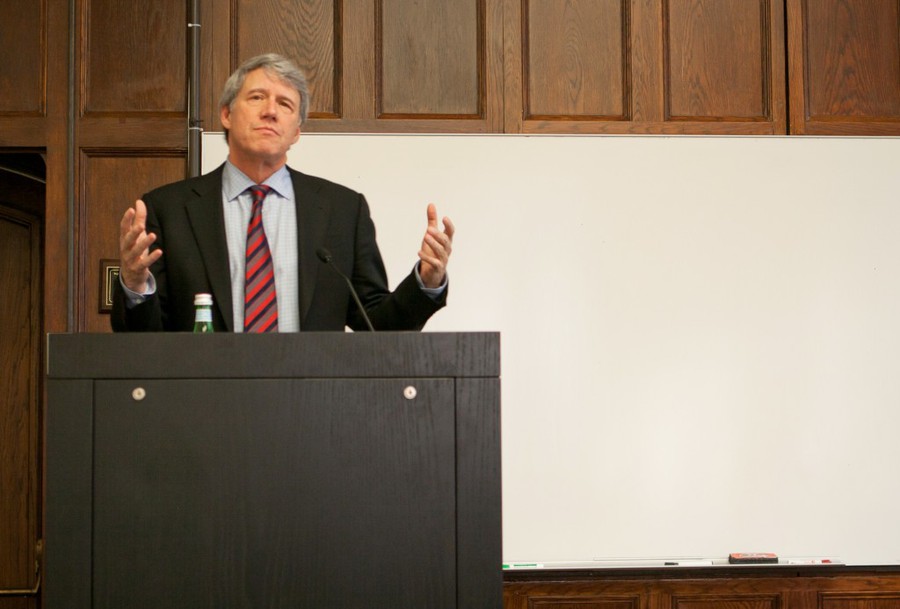 On Thursday night, UChicago Law School professor Geoffrey Stone talked about his new book The Free Speech Century at the Seminary Co-Op in a Q&A style discussion with David Strauss, a fellow professor at the Law School.

Stone has written and contributed prolifically on constitutional law, and speech in general. He served as one of the main contributors to the 2015 Report of the Committee on Freedom of Expression, often known as the Stone Report, outlining the University’s commitment to unencumbered intellectual inquiry—namely during a time in which censoring of unpopular opinions is commonplace. He served as the dean of the Law School from 1987 to 1994 and provost of the University from 1994 to 2002.

Stone published the edited volume alongside Lee Bollinger, the president of Columbia University. It commemorates the 100th anniversary of Schenck v. United States, the first major Supreme Court decision on the First Amendment, and the doctrinal evolution of free speech itself.

“There is no doubt that we have gone through a period—in living proof—in which many of the basic precepts of the First Amendment have been called into question by changes to the nature in media,” Stone said. He made a clear distinction between how news was spread in the past and how it is spread today—with a wide variety of platforms and sites, aside from more historic sources like ABC, CBS, and The New York Times. “They all, more or less, were responsible about the ways in which they characterized and reported facts. That reality has changed profoundly in recent years,” he said.

Those in attendance ultimately engaged in a forum-style conversation with Stone. Attendees probed Stone on a number of issues relating to current implications of speech, including Russian interference on social media, transnational platform censorship, government intervention, and academic freedom. Stone provided insight into the implications and constitutional value of such issues.

“I am an optimist by nature, and I have to imagine that somehow or other we will solve [abuses of and threats on speech], but I don’t actually know what the solution is,” he said.