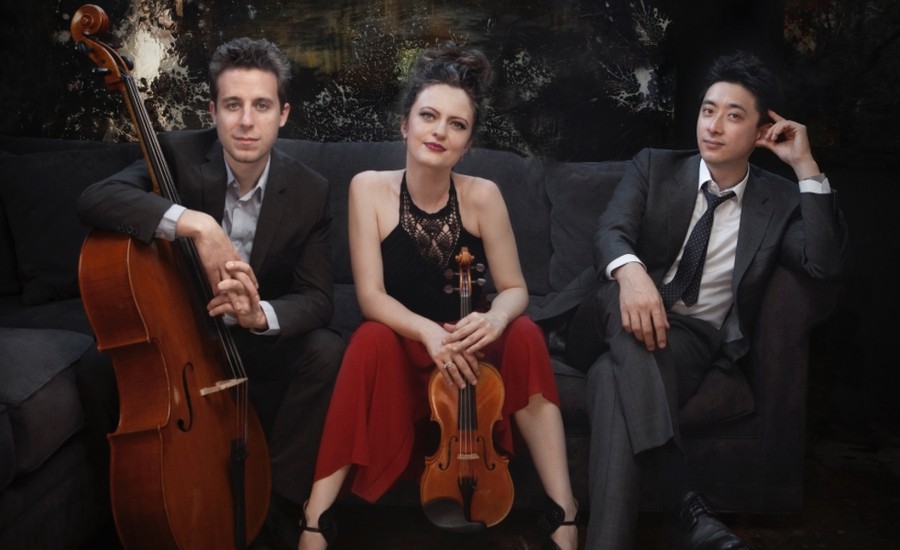 On Thursday evening, a day before their anticipated performance in Mandel Hall, Trio Céleste held a master class for the multiple student chamber groups on campus. During the reception, Juilliard-graduated pianist Kevin Kwan Loucks, who only moments before had been intensely correcting students on dynamics in Maurice Ravel’s Piano Trio in A minor, was amicably socializing with the same students, trading recommendations for nearby restaurants.

Perhaps it is the combination of their raw, down-to-earth musicality and the virtuosic mastery of their instruments that makes Trio Céleste so successful as a chamber group. Regardless of what the explanation for their renowned reputation may be, the musicians demonstrated their capability on Friday evening when they performed as part of the UChicago Presents series. The group began the night with Sergei Rachmaninoff’s Trio élégiaque No. 1 in G minor. One of the composer’s earlier works, the piano trio was finished in 1892 while 19-year-old Rachmaninoff was still studying at the Moscow Conservatory. The composition is highly lyrical and is reminiscent of other Russian Romantic composers, namely his mentor Pyotr Tchaikovsky. The beautifully interwoven melodies were treated with delicacy at the hands of Trio Céleste.

From the very first note, the chamber group established their approach to the piece as a piano-driven composition; pianist Loucks shined throughout the performance with refreshing musicality. Especially impressive was Loucks's interpretation of the elegiac theme at the beginning of the piece, which immediately captivated the audience. The trio’s theme as an elegy is often interpreted to be an homage to Tchaikovsky’s Piano Trio in A minor (Op. 50), where a similar use of the funeral march can be observed.

The second piece that the trio performed stood out among the rest. Pierre Jalbert’s Piano Trio No. 1 is a contemporary composition that relies on emotive expression of dynamic contrasts instead of the more rigid lyricism found in the rest of the program. The first movement, named “Life Cycle,” features a violent mixture of tension, silence, and abrupt changes of rhythm. In it, Trio Céleste demonstrated their range of flexibility, as the delicacy shown in the previous piece was replaced by a beautiful and passionate release of emotion.

Violinist Iryna Krechkovsky, whose reputation precedes her as an internationally-recognized soloist with multiple awards recognizing her talent, rose above the rest with her powerful approach to dissonance and execution of whispery, melancholic harmonics. The performance of the second movement, “Agnus Dei,” featuring a more muted composition with forceful tensions in the second half, demonstrated the musicians’ capacity for flexibility. Written by the composer with the intention of being a dedicatory piece for the life and works of Mother Teresa, Jalbert’s second movement was executed masterfully by the performers with breathtaking dynamic contrast and precision.

The most highly anticipated piece was saved for last as the trio prepared themselves to play Tchaikovsky’s famous Piano Trio in A minor (Op. 50). One of the most well-known chamber compositions, the piece has been played countless times by world-class musicians, Trio Céleste included. They executed this difficult piece with impeccable precision and colorful musicality. Similar to how Rachmaninoff’s trio was dedicated to Tchaikovsky and Jalbert’s movement was dedicated to Mother Teresa, Tchaikovsky’s work was dedicated to his mentor, Nikolai Rubinstein.

The piece is filled with excitement and passion, but also melancholy and reflection. Trio Céleste attacked the first movement with vigor and youthful energy. Cellist Ross Gasworth began the piece with a beautiful solo and remained a powerful presence throughout the piece, contrasting the bright tone of Krechkovsky with a rich sound complemented by crisp articulation. The second movement proved to be even more powerful as the musicians dove into the variations with renewed vitality. Loucks once again demonstrated his talent by playing the piano solos at contrasting speeds and offering his own unique interpretation of Tchaikovsky’s writing. The piece came to a magnificent ending as the Variazoni finale e coda was executed in full momentum, ending with the funeral march theme and leaving the entire audience with a quiet yet deafening sense of awe.

Whether they are playing on the stage of Carnegie Hall, where they received critical acclaim for their performance, under the harvest moon at Juilliard, where they came up with their group’s name, or in UChicago’s own Mandel Hall, Trio Céleste never ceases to amaze. Friday evening’s performance established them as one of this year’s finest performers for UChicago Presents.