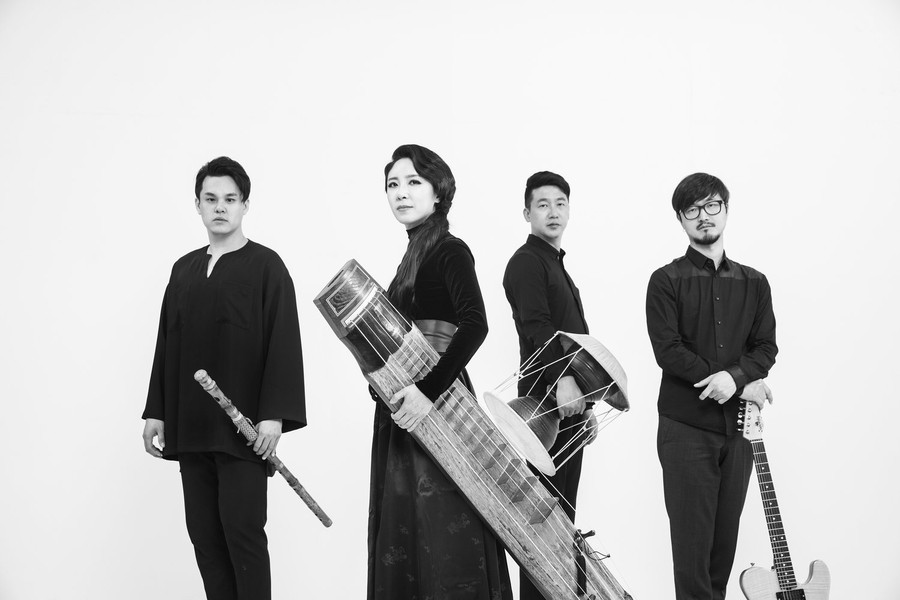 Members of the ensemble Black String pose with an eclectic array of instruments both ancient and modern.

When we think of Korean music, we often turn to the popular modern K-pop movement: electronic music, elaborate dance choreography, BTS, Day6, CL, Blackpink, and even the iconic “Gangnam Style.” But the Korean music ensemble Black String offered the audience in the Logan Center for the Arts a glimpse into Korean history and culture.

The intense pieces were performed on traditional instruments, such as the geomungo, a stringed Korean zither; the daegeum and danso, the Korean bamboo flutes; the yanggeum, a hammered instrument; and the janggu, the hourglass-shaped drum. As a Korean American, I was briefly introduced to these instruments through my family, observing performances in South Korea. But with Black String, I was instantly struck by their incorporation of electric guitar, modern percussion, rhythmic blues, and pulsing electronic sound into the traditional Korean pieces. This move seemed to defy the “unified bloodline” conscience Korean culture passionately values.

Conservative South Korean culture holds pride in a social construct we call “purity.” Korea boasts of a uniform political ideology of ethnic nationalism, a cultural trait that emerged from the Japanese annexation of Korea in the twentieth century. Black String’s fusion of Korean folk music and foreign tunes seem to invade this construct—perhaps conveying the message that “purity” is merely a myth, and culture itself is malleable, mobile, and susceptible to globalization.

This concept was readily apparent in the first piece, “Seventh Beat,” in which the thrumming of the geomungo was met with the wailing of the bamboo flute; the static noise of the electric guitar and the pulse of the electronic beat juxtaposed the traditional Asian tone. In a complicated juggle of domination between each instrument, the ensemble gradually built up to a crescendo, the janggu furiously thudding. It then ended with a dramatic diminuendo that left nothing but the cries of the flute echoing throughout the hall. Rather than having one instrument in control of the entire piece, Black String seemed to tie the cacophony altogether, implying that musical instruments—whether ancient or contemporary ones—can harmonize together and still create something that presents Korean culture.

The string instrumentalist Yoon Jeong Heo introduced the next pieces, “Mask Dance” and “Song from Heaven,” in the tradition of one of the oldest types of Korean music. “Mask Dance” began with a throbbing electronic pulse, met with equivalent energy through the plucking of the geomungo and the flute and guitar mimicking each other’s high-pitched shrieks. After a brief silence hung in the air, the ensemble mesmerized the audience with a vocalization from percussionist Min Wang Hwang, a series of vibratos and wordless yells that are characteristic of traditional Korean chanting. The chants oscillated between enchanting to unsettling, Hwang’s voice thundering through the hall with no space for a break in tension between his melodies.

“Song from Heaven” was the piece that remained glued in my mind after the concert finished, with its minor and meditative chords accompanying the lamenting—yet hopeful—vocalization by Hwang. Upon listening to his chants, I realized he was repeating a religious hymn to join the gods. This type of song was sometimes performed at funerals and sacred temples; the musicians delivered a somber piece worthy of such characterization, but sprinkled in glimmers of hope of reunification and grace as well. Heo briefly told the audience that the lyrics could be roughly translated as "Please God, come to us."

The ensemble finished the night with the “La Sureña," “Strangeness Moon," “Flowing, Floating," “Blue Shade,” and “Dang, Dang, Dang.” “La Sureña” was derived from melodies in Spanish music, with motifs reminiscent of the famous repetition in “Habanera.” “Strangeness Moon” and “Flowing, Floating” demonstrated Heo’s undeniable skill in avant-garde composition of ritual music. Heo's fingers scratched at the strings of her geomungo, her nails scraping against the wooden instrument as she flickered in and out of sync with the flautist, Aram Lee, and guitarist, Jean Oh. The daegum flute often flirted with the guitar over the rattling of the janggu, which loomed large but never manipulated the course of the pieces.

“Blue Shade” was a marriage of American rhythmic blues and Korean swing, with the jazzy syncopations blending smoothly with the somber yet punchy dissonance of the flute. The onomatopoeia of “Dang, Dang, Dang” served as an allusion to the repetitive plucking of Heo’s zither, and encouraged audience participation as the accelerando through the progression of the piece called for rhythmic clapping. It featured a lengthy percussion solo, in which a hollow, thin noise captivated the audience with its firmness in tone, as well as a rapid, fiery, flutter-tonguing beatbox flute solo that demanded absolute silence from the other instruments as well as the audience.

Walking out of the Logan Center, with the traditional rice drink sikhye in one hand and modern-day chocolate Pepero sticks in the other, I was left awestruck by the synthesis achieved by Black String—a musical endeavor that challenges conservative Korean values and kindles the possibility of transnational identity—all without forgetting the aesthetics and power of Korean musical culture.

The version in print erroneously labeled the geomungo as sanjo. The sanjo is a musical genre in traditional Korean music, often played by instruments such as the geomungo.

The version in print erroneously interpreted Heo's translation for "Song from Heaven."