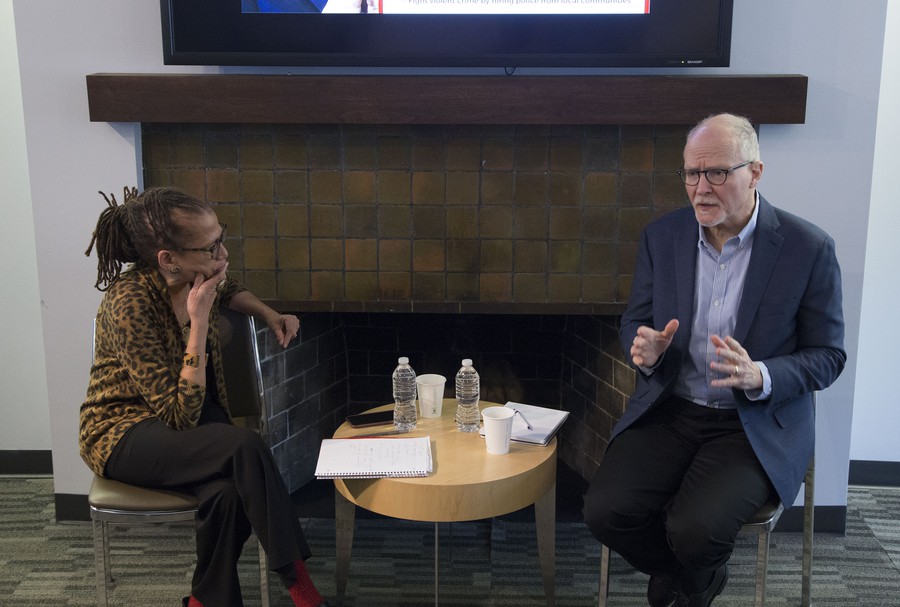 Institute of Politics (IOP) Pritzker Fellow Laura Washington, a Chicago Sun-Times columnist and political analyst for ABC7, spoke with mayoral candidate Paul Vallas about his election platform at the IOP on Monday.

This is the first of the IOP’s discussions with 2019 mayoral candidates, as part of its Chicago Elections Project.

At the event, Vallas cited his experience as a former Chicago Public Schools (CPS) CEO and City Hall budget director as evidence that he is best qualified to solve the City’s deep budget crisis.

“When I went to the schools, I inherited a $1.4 billion structural debt and I left them with $1 billion in cash balances and 12 bond rating upgrades,” Vallas said. “Google and find out if anyone who’s ever gotten 12 bond-rating upgrades in the pension system.”

Vallas disapproved of former Mayor Richard M. Daley’s Renaissance 2010, the CPS program which resulted in the closure of nearly 100 public schools and their replacement by charter schools. Vallas claimed that the program destabilized neighborhoods as students were not able to attend the new schools in the same neighborhood, causing a decrease in neighborhood population and school funding. Vallas also asserted that Rahm Emanuel “made things significantly worse.”

“But you were a part of the Daley administration,” Washington said. “You were an appointee of Richard M. Daley, so why were the Daley years so terrible? Was it after you left?”

“Because I left,” Vallas answered, to some laughter.

When asked about his strategy for solving these issues, Vallas responded that his plan was to fund the pension system and balance the budget by increasing the capital gains tax. He also identified the real estate transaction tax as a good opportunity to increase revenues and said that $150 million could be generated by getting rid of the City’s unnecessary contractual expenditures.