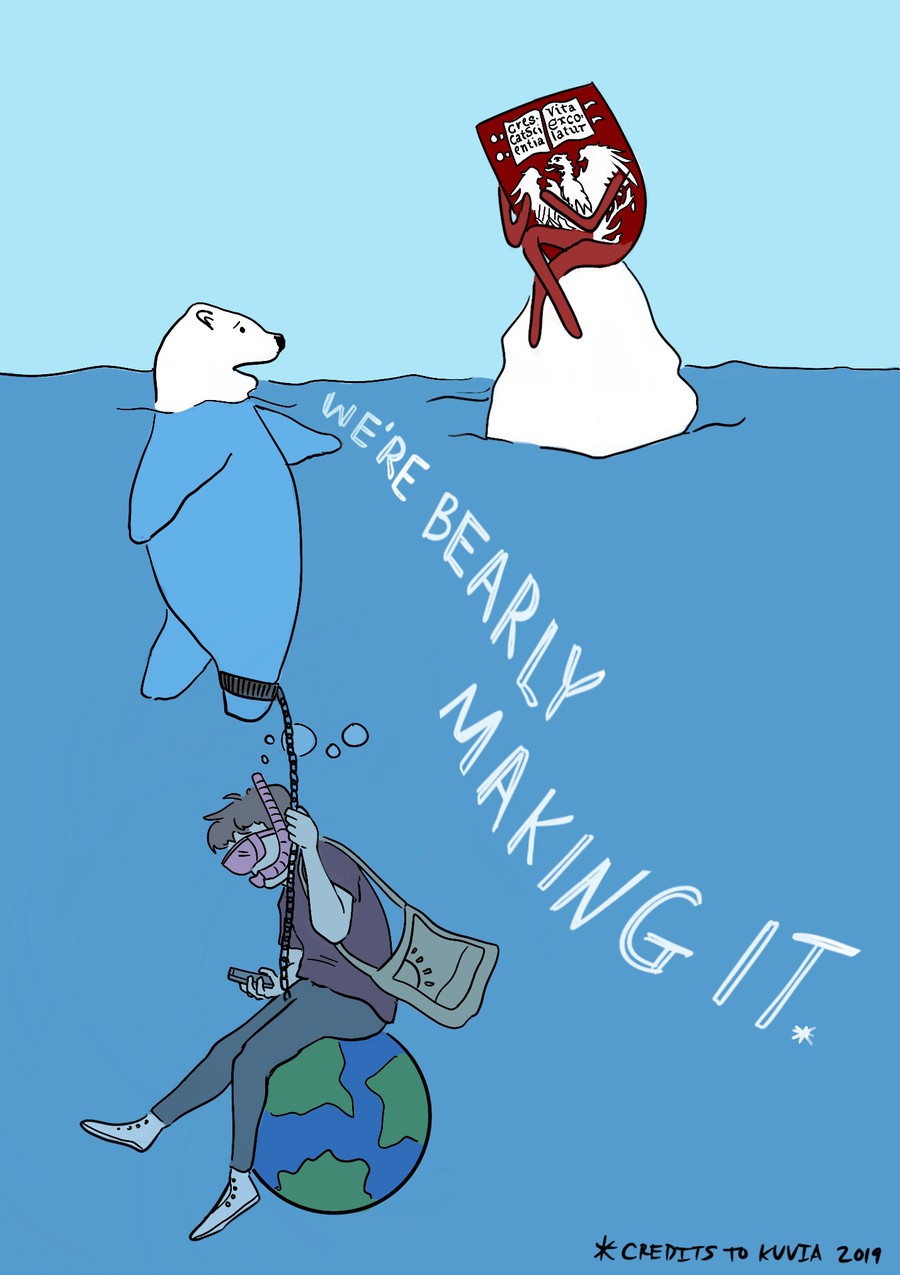 Maybe it’s just because my state is on fire, but I’ve been thinking a lot about climate change lately.

Okay, so it’s probably not only because California is on fire. Climate change is happening everywhere, and it’s increasingly covered in the news media, discussed in comedy, and addressed by celebrities.

But watching my home state burn certainly hasn’t increased my patience for apathy or emotional distancing when it comes to environmental issues. Because rising sea levels and fire affect more Californians each year, environmental education is a typical part of California’s elementary school curriculum. In fact, our carbon emission standards for vehicles serve as a model for 16 other states. Since coming to campus this fall, however, I have witnessed incredibly different attitudes when it comes to the environment: Perspectives on sustainability here contrast sharply with those of where I grew up.

A cavalier attitude toward the environment manifests in individual actions—people bring Smartwaters to class, even though the College practically throws free reusable bottles at us every few months, and the Harper Café mug exchange program goes virtually unused. This lack of environmental commitment is even more disturbing at the administrative level: Our school invests in fossil fuels and refuses to discuss stepping away from this dirty money.

To be clear, there are committed groups on campus doing incredibly difficult work pushing the administration on environmental issues. Individual volunteers and organizers for the Phoenix Sustainability Initiative (PSI), the UChicago Climate Action Network (UCAN), and other campus conservation organizations have made huge steps in this domain, instituting important initiatives like PSI’s current food recovery project. But whereas many students on campus are involved, at least to some degree, in social activism, it seems like the majority of environmental activists on campus are pursuing environmental degrees and planning careers in sustainability—in other words, they’re all in. There’s little engagement in environmental initiatives from the rest of the student body, and that’s scary. As a representative from PSI put it, “Things I think should be second nature aren’t. They’re associated with environmental activists or environmental professionals, when actually...this is something everyone should be doing.” In the absence of administrative accountability, the burden of bringing this school into the 21st century with regards to the environment cannot be placed wholly on dedicated but small student groups. We need a larger cultural shift, and that should can come from recognizing that environmentalism isn’t just about trees or charismatic endangered animals. Today’s environmental issues are social issues. Every social justice issue of the 21st century—reproductive health, immigration, mass incarceration, and more—is, or will soon be, impacted by rapid environmental change. This is especially salient in Chicago, where environmental racism manifests strongly in disproportionate lead poisoning exposure and asthma rates and in the worsening of the effects of climate change on agriculture.

It’s critical that students and faculty concerned about social justice on campus incorporate environmental justice as a larger part of their activism, not because of polar bears (although I like polar bears), but because of the human cost of environmental change. We already know that this school’s relatively conservative administration will not act on its own. University President Robert J. Zimmer has disparaged divestment in the past. As of 2015, he could not confirm what portion of the College’s endowment was invested in fossil fuels and said he was unconvinced that the University’s involvement in the fossil fuels industry was “so incompatible with paramount social values as to require careful assessment of the consequences.” That standard comes from the University’s own Kalven Report, published in 1967. The report takes the general stance that the University of Chicago should maintain neutrality on political issues but leaves ample space for exceptions in extreme cases, of which the UChicago Climate Action Network argued climate change should be considered one. When it rejected divestment, this school made clear that its policy with regards to the environment will not change on its own, and that it will require more than just the efforts of small but dedicated student groups. Campuses that have successfully divested have done so with the support of huge swaths of the student body coming out to protest and putting pressure on school administrations. If we want to make progress here, we need participation from students more than anything else.

Even if you aren’t an activist, even if you’d be ashamed to be seen in public with a metal straw or don’t see yourself as supporting divestment, this impacts you, too. Environmental change is an ecological and political issue, yes, but it is also a health crisis and a matter of national security. It is an increasingly complex and important focus of both legislation and litigation, a force shaping the modern technological field with massive economic consequences. Languages are going extinct in the face of climate disaster, so environmental harm concerns linguists as well. Moving forward, we will need psychologists to analyze sustainable communications, philosophers to interpret cultural responses to environmental degradation, and artists to fuel a creative movement around the issue.

In short, even if your house is not on fire (yet), and even if your town does not experience sea rise at ever-accelerating rates, your career in virtually any field will be impacted by the environmental changes projected in the coming decades.

Students at elite colleges are notoriously preprofessional, and UChicago is no exception. We learn R for the résumé line, scramble for internships starting first year, and join business fraternities. This school has the brain power to accomplish a lot—and we have, and we do—but not, I think, enough with regards to the greatest threat facing our society: climate change. You can start small: go to Baker to eat when Bartlett only has plastic plates and bring a thermos with you to campus cafés. This alone, however, is not enough. You must also practice actively making connections to climate change in discussion classes to spur conversation, attending campus sustainability events, and pushing friends in Student Government to address environmental issues. Think of it as preparation for the biggest job of our generation: protecting humanity for generations to come.