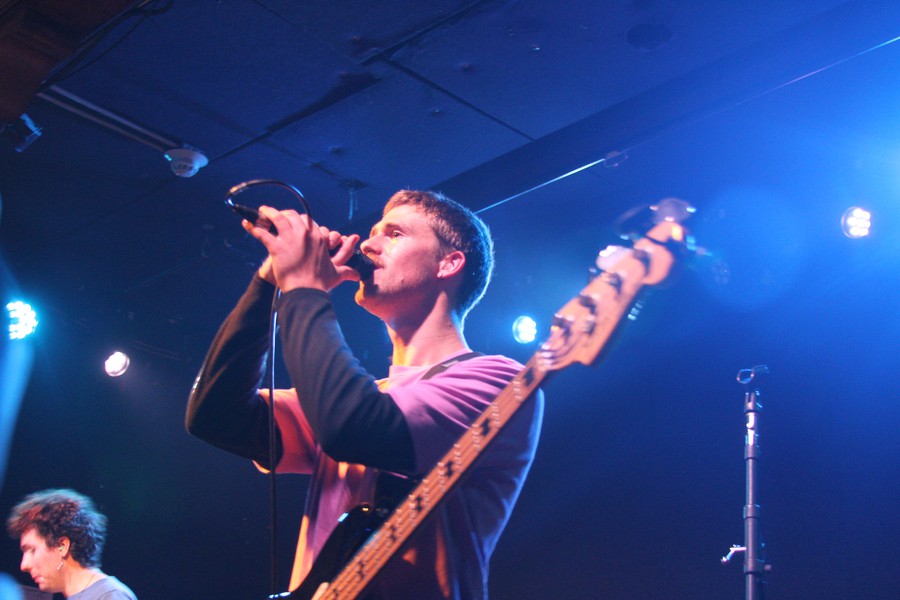 Still Woozy, the headliner at Schubas Tavern on Thursday night, is a decidedly new solo project from Oakland-based singer-songwriter Sven Gamsky. Previously, Gamsky fronted a math-rock group called Feed Me Jack, which he formed while still an undergrad at UC–Santa Cruz. He has released just six songs and a single remix since his emergence in early 2017, although there is an EP, Lately, on its way. Still Woozy’s sound is intriguing, a silly, soulful melding of jazzy vocals, funky guitar riffs, and modern electronic production into a cohesive sound that feels almost like an out-of-body experience.

This sound is certainly at the root of his rapidly growing appeal, but Still Woozy is also part of a new breed of artist that has found success through the sometimes arbitrary curations of Spotify’s widely followed playlists. His  single, “Goodie Bag,” is featured on Spotify’s Fresh Finds, a playlist with over 500,000 followers. He has attributed that exposure with jumpstarting his solo career. Even with such a thin body of work—no EPs and no albums—Still Woozy has nearly 2 million monthly listeners on Spotify. He is clearly on his way up.

This Thursday's concert didn’t feel like something put on by an artist fully conscious of the enormous popularity that looms before him. It was understated, in a small venue, on a small stage, lit by a single row of colored stage lights. It felt very DIY. And as Jordanna, the first of three openers, took the stage to raucous cheers, it felt very right.

Jordanna’s set was at once brash and sensual, doused in pink and purple light. A Chicago-based artist, Jordanna spent most of her early years as an artist in the punk band Glamour Hotline, but her recent sound has been softer, mixing jazz and R&B influences. She plays songs from her newest release, Sweet Tooth EP, many of which touch on love and all its complications, from the heartbreak of being cheated on to the uncertain excitement of mutual attraction. Jordanna had a certain relaxed confidence about her on stage, swaying her hips as she crooned into the microphone. “We’ve got a stand outside,” she lilts after her last song, her eyes still half-closed and a smile on her lips. “Y’all should stop by and say hi after...or nah. It’s whatever.”

Monster Rally came on next and dove straight into his set, which sounded like one continuous, ever-shifting soundtrack to a tropical island vacation. Ted Feighan, the producer behind Monster Rally, takes samples from old, mid-century records, many of them featuring tropical or otherwise exotic sounds, and arranges them together over a contemporary electronic beat. The music, coupled with psychedelic images that played in a video behind him, made for an interesting, trance-inducing experience that was perhaps better appreciated when not fully sober. On its own, the set felt interminable at times.

VICTOR! was the third and final opener, and while the crowd was anxious for Still Woozy, the band did a great job of keeping the audience engaged. Frontman Victor Cervantes is an 18-year-old boy from Chicago, and has a natural charisma about him. He was goofy and cute as he sang millennial love songs with a wide, youthful smile on his face.

Finally, after over two hours of preceding acts, Still Woozy took the stage to an eruption of cheers and screams. A girl with a nose piercing and a chain belt pushed her way to the front of the crowd, phone camera pointed up at the band. “I love you!” she yelled, but her voice was drowned out and Gamsky, the man behind Still Woozy, didn’t seem to hear.

Still Woozy played through its entire catalog of just six singles, interspersed with several covers and a brand new song that will presumably be on the upcoming EP. When they sang “Goodie Bag,” Still Woozy’s biggest hit to date, the entire crowd seemed to know the words and everyone sang along. There seemed to be a general release, a general effusion of energy, and Still Woozy fed off of it.

At one point, the keyboardist, dressed in embroidered jeans and a red puffer jacket, got into a dance battle of sorts with the drummer as Gamsky sang, backed only by a pre-recorded beat. There was no choreography there. It was off-the-cuff, mindless, free. The keyboardist twerked, glitter eyeliner shining under the stage lights. The drummer slapped his ass. Just like the music, the band itself seemed a little woozy, a little out of it, but in the best possible way.

After the show, Gamsky, drenched in sweat, climbed down from the stage and was immediately surrounded by fans. He seemed a little bewildered by the outpouring of love as the crowd huddled around him, all wanting to talk to him and take pictures. When we managed to get his attention to congratulate him on the show and ask for a picture, he apologized for how sweaty he was. With only a few songs to his name, Still Woozy might not yet realize how much his music resonates with his fans and how popular he truly is. For now, he’s just enjoying the moment, sweaty and engulfed by an adoring crowd.