The Firecracker Flair of La Bohéme

“Blessed with an aptitude for comedy and finely honed by practice, this couple stole the night.” 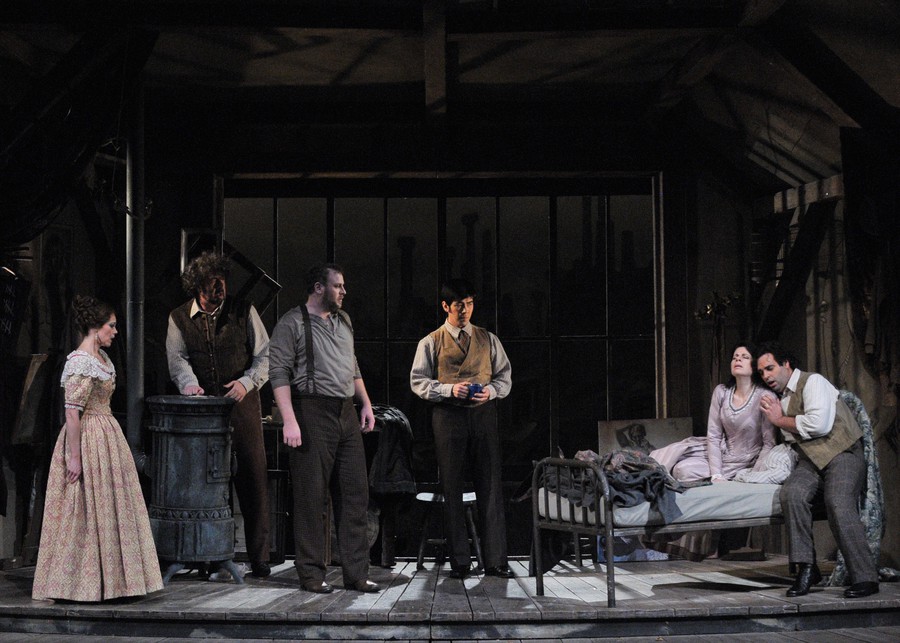 La Boheme at the Lyric Opera in Chicago

In the Lyric Opera’s rendition of La bohème, Parisian bohemians Musetta and Marcello formed a comedy-gold couple that claimed most of the laughs inspired by Giamoco Puccini’s 19th-century classic. One half of the duo, Musetta (played by Danielle De Niese), caught my eye as soon as she leapt on stage. Her flaming personality shone even brighter than her red dress. Like a firecracker, De Niese spat fire with every line and ostentatious move. Her dramatic decision to remove her underwear and flaunt it in front of her jealous lover was the first big “Aha!” moment of the opera. De Niese pulled the suggestive move off in a wildly humorous manner, not at all indecent or offensive. It was in line with the almost combustible personality of her character and got the immediate reaction, not only from Marcello, but also from the stunned audience.

With every move Marcello made, Musetta came down on him even harder. It was a spectacle that challenged both De Niese and Nelson as Musetta and Marcello, respectively: a challenge to which both singers rose. Nelson elicited a fair share of laughs from the audience as well with his liberal body language. His suggestive gestures put him on the same wavelength as Musetta and I could see why the chemistry between the two was so strong. Every line he sang managed to be wildly funny but not overdone. At the end of the opera, the comedic effect the couple had brought to the stage by this couple was clear in the audience’s overwhelming cheers. Blessed with an aptitude for comedy and finely honed by practice, this couple stole the night.

If Musetta and Marcello claimed most of the laughs in La bohème, then Mimi and Rodolfo claimed most of the tears. They each had solos beautiful enough to touch every heart in the room. However, Maria Agresta and Michael Fabiano as Mimì and Rodolfo lacked the spunk that was so brilliantly established by Musetta and Marcello I found Agresta’s Mimì—with her purity and angelic nature—so wholly wholesome and innocent that I couldn’t empathize. Rather, I listened in awe as she sang of April’s first kiss and watched in wonder at the grace she brought to the stage. Her clear voice in unison with Fabiano’s made the audience wax poetic by the end of the performance. Like honey to the audience’s famished ears, these two effectively showcased a beautiful story infused with love but drenched with tragedy.

Another relationship in the opera that the audience fawned over was the bromance between Rodolfo and Marcello. In the fourth act, they confronted each other about their genuine hidden feelings for Mimì and Musetta, calling the other out on what each realized the other must be feeling. The degree to which they understood the other’s situation was sung in perfect harmony in their duet. They spilled the depths of their hearts using different words, techniques, and notes, but essentially saying the same things. The unity in their discord revealed the astonishing chemistry of the singers as well as the musicality of the opera.

On a technical note, I greatly appreciated the Lyric Opera’s decision to have the English captions up at the top of the stage. Usually, operas have explanations in their programs or slight translations, but this line-by-line translation made the performance much easier to follow and emphasized the chemistry of performers as they sang together.

This production of La bohème pulled off the tragic scene with grace and poise. We got to hear the first spoken lines of the play in the finale of the fourth act, which was representative of the change caused by Mimì’s passing. It was beautifully somber and brought a hush that effectively silenced the whole opera hall for five seconds of what felt like pitch-black darkness in an arena previously showered with light and laughter.

La bohème was a commentary on the fleeting moments of life. Even in lives that sparkle with fire or shine with the wholesomeness of April’s first kiss, it is impossible to escape death. But one can argue that the impermanent nature of life is what makes it valuable. As one singer eloquently put it, “Love is lifeless without a spark of laughter.”