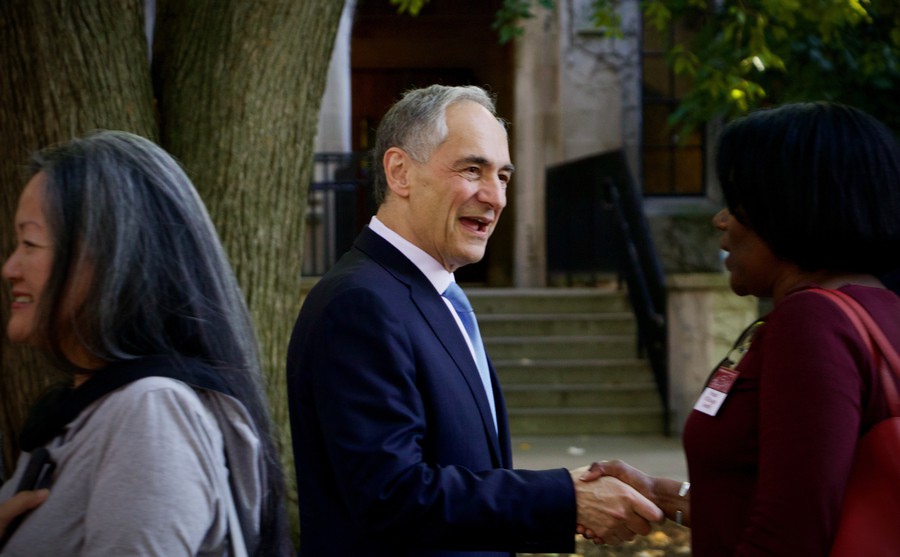 President Robert Zimmer meets with parents at a reception during O-Week.

University of Chicago President Robert Zimmer voted in Illinois’s Republican primary in the 2016 election, according to public voting histories.

Illinois requires voters at the state, congressional, and presidential levels to declare their affiliation with a political party at the polling place before voting in that party’s primary. Such declarations are recorded and made public.

Zimmer has long been coy about his politics, declining to answer a question on the subject in a 2016 interview with The Maroon. In recent years, however, he has become somewhat of a celebrity in conservative circles, earning praise from commentators for publications like the National Review and The Federalist for attacking “safe spaces” and “trigger warnings” as the public face of the University of Chicago’s purportedly pro-free speech stance.

Under Zimmer’s leadership, the University has taken a strong anti-union position with respect to graduate student workers, refusing to negotiate following a decisive vote in favor of unionization in 2017, even as other universities like Harvard have done the opposite.

Zimmer has also led the University as it sent several letters to the Donald Trump administration in opposition to its immigration policies, though at times UChicago has responded to the current administration more moderately than other colleges, opting not to declare itself a “sanctuary campus” and declining to join hundreds of universities in endorsing the Paris climate agreement.

Zimmer voted in a primary election in only one other year since 2000 according to public voting histories, voting in the Democratic primary in 2008.

The voting histories were aggregated and made easily accessible by the mobile application VoteWithMe, a project run by the New Data Project, a progressive nonprofit founded by former Google engineer and Barack Obama administration alumnus Mikey Dickerson. Data for the most recent election cycle was not yet available at the time of publication.