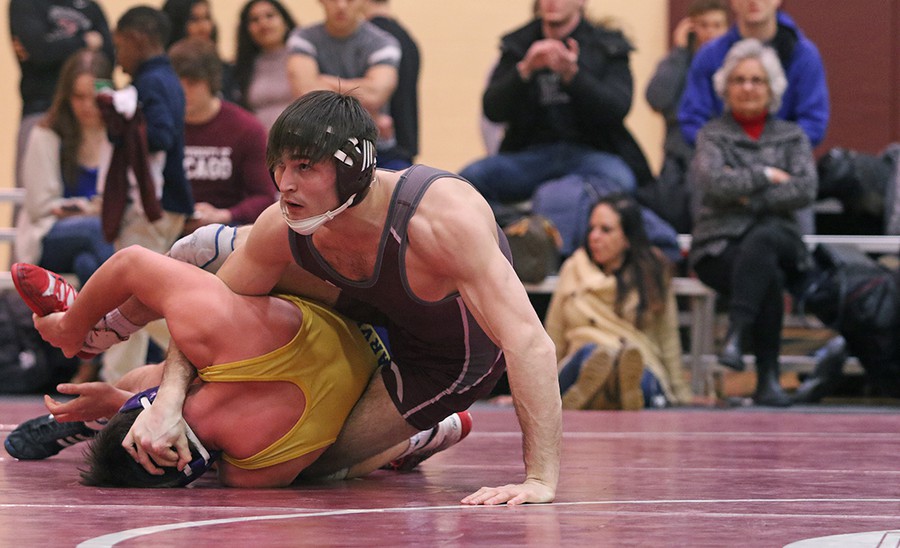 In another impressive showing on the mats, the No. 18 UChicago wrestling team had three wrestlers reach the podium at the Pete Wilson Invitational at Wheaton College on Sunday. In the oldest and largest small-college wrestling tournament in the country, the Maroons were highlighted by third-year Kyle Peisker’s (174 pounds) second-place finish, the first UChicago wrestler to reach the title match at Wheaton in three years.

With its origins dating back to 1938, the annual two-day event hosted 39 teams in total, 11 of which were nationally-ranked. Seven Maroon wrestlers received invitations, with five advancing to the second day of the event. Entering as the No. 2 seed, Peisker led the way Saturday with a perfect 3–0 showing. On Sunday, he continued his production by defeating his semifinal opponent 5–2 in the morning, dropping a hard-fought match to the top seed from Mount Union in the final. The stellar showing puts Peisker’s season record at 27–4, earning him UAA Athlete of the Week honors in the process.

When asked about the successful showing, Mulkerin said, “We only sent seven guys to the tournament, but to have five advance to day two was impressive. We had three place winners, which is a great showing for one of the hardest division three tournaments in the country.” Looking ahead to Saturday’s match against Augustana, he added, “I think that despite not having a full lineup due to injuries, we’ve still had guys stepping up at every weight and starting to really peak in performance. I feel very confident going into Friday, as this current team is the best I’ve seen in my four years at this school.”

The Maroons return to the mats of Henry Crown Field House on Friday for their final home match of the season, playing host to a struggling Augustana College squad. In a trip to Augustana a year ago, Chicago managed to cruise to a 27–21 victory, serving as the perfect tune-up before capturing the 2018 UAA title, snapping NYU’s six-year title streak. Looking to build momentum to carry into the postseason, Augustana will serve as the Maroons’ final test before this year’s UAA Championship in Cleveland, Ohio on February 9. Friday’s match is set to begin at 7 p.m.