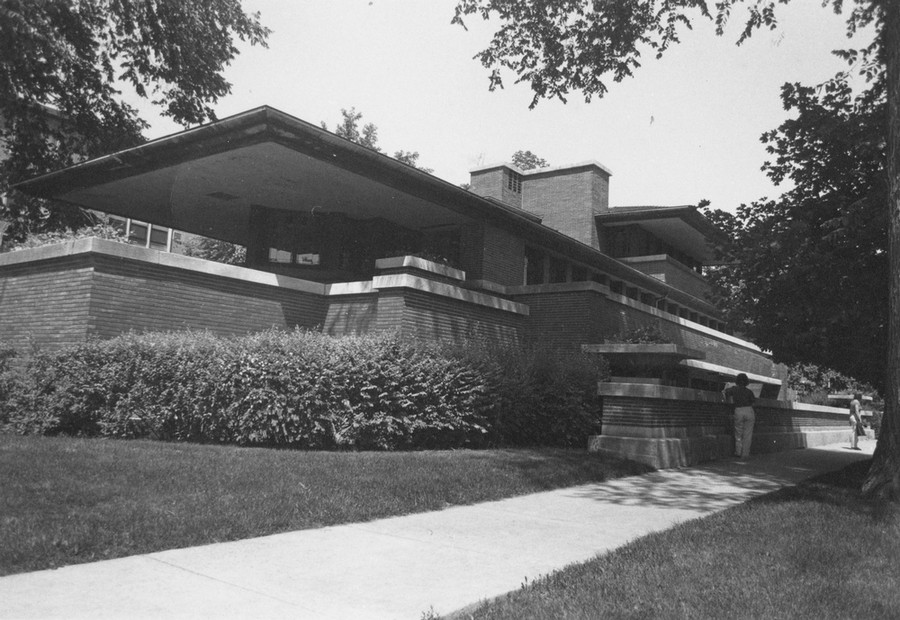 Visitors admire the Robie House, located at 5757 South Woodlawn Ave., in this photo from the Maroon archives circa 1970.

It’s common knowledge that the Frederick C. Robie House is one of the more famous of the many tourist attractions on and around campus. And it’s obvious, looking at world-famous buildings and monuments, such as the Robie House, many now centuries old, that they’re irreplaceable mediums for conveying culture and history. They’re irreplaceable, in fact, to the point that their vulnerability, decay, or outright destruction often attracts high amounts of media coverage and activism. The most oft-cited examples of destroyed architecture are sometimes ancient, as in the lost ancient wonders of the world. One of the most alarming in recent memory was the burning of the Notre Dame this past April. As of late, they’re often in places affected by war and other armed conflict, like the Islamic State group’s destruction of ancient Syrian buildings. Countless important but less famous buildings have ended up demolished over the years. These, on the other hand, garner comparatively less attention. These are structures large enough to obstruct a planned development, or small enough to not warrant a second thought.

Here in Hyde Park, Frank Lloyd Wright’s Robie House recently underwent extensive interior restoration. And as of now, it’s safe to say that it’s been spared the fate of the aforementioned buildings. For the first time in decades, both the inside and the outside of the house reflect Frank Lloyd Wright’s original plans and vision. But the path he took to get it there was anything but straightforward, and the fact that it stands today at all was far from guaranteed. The Maroon spoke to David Bagnall, the Frank Lloyd Wright Trust’s curator in Chicago, for further details on the house’s turbulent history.

Built in 1909 at the behest of the Robie family—Frederick, Laura, and their children—the house wasn’t quite on campus back then as it is now. The University had only just begun to expand in the house’s direction under President Harry Judson. The Theological Seminary, the Protestant-affiliated seminary now based on 60th Street, wouldn’t move into Saieh Hall until 1923. Ida Noyes, just down the street, wouldn’t exist until 1916, dedicated as a celebration of the University’s quarter-centennial. In spite of its age, the house has always been nearly adjacent to the University.

Both Frederick and Laura Robie made very purposeful decisions about the house and its placement. Frederick Robie was a Chicago native, self-described as ambitious, and the inventor of an experimental motorcar. He wanted a kind of remarkable house and had plans to make it so. But as he would tell his son in an interview 50 years later, his plans were “nebulous” and he “could not explain it to anybody.” In the end, it was Wright himself to whom Robie was attracted.

“I became rather interested in his views,” Robie said. “And I thought, well, if he was a nut, and I was maybe, we’d get along swell. He agreed that was entirely possible.” Wright often found that “American men of business with unspoiled instincts and untainted ideals” were his favored clients. “A man of this type usually has the faculty of judging for himself,” he wrote in his 1908 essay In the Cause of Architecture. Wright liked those clients who were as idealistic as he was about architecture and its purpose.

Laura Robie (née Hieronymus) had visited Hyde Park for the 1893 World’s Fair. After riding on the Midway Plaisance Ferris wheel and seeing the sights, she decided she wanted to attend the University. She went on to live in Foster Hall, then the University’s first women’s dorm, and now offices on the quad. Laura and Frederick had met at a dance at the University. Frederick Robie, at the time, had been living in Englewood.

As such, the house’s proximity to the University was a likely a conscious decision on the part of Laura Robie, Bagnall said. “There’s no...family accounts that were left, but Laura Robie was a graduate of the University of Chicago, and it’s likely that she was interested in remaining a part of the social life at [the University],” he said.

Wright took note of the house’s placement near the University as well, but for more idealistic reasons. Wright balked at the contrast between the University’s supposed intellectual or progressive spirit, and the fact that the University’s buildings mostly called back to an earlier age. “Why should an American university in a land of democratic ideals in a machine age be characterized by secondhand adaptation of Gothic forms?” he said in a 1930 Princeton lecture.

Wright saw the Robie House as his chance to contrast the University’s nostalgia with what, in his view, could be a house both beautiful and practical for the 20th century, not the 12th.

However, the Robie family only lived in the house bearing their name for 14 months. Frederick Robie sold the house a short time after his father’s death to settle debts. Around the same time, Laura Robie had filed for divorce, taking both children. The Taylor family bought the house from Frederick, but their tenure in the house was also short lived. David Lee Taylor bought the house in December 1911 and died in October 1912, after which Ellen Taylor sold it and moved back to Wilmette, IL.

The Wilber Family bought it from the Taylors, and went on to spend the most time living on the property. They lived there from 1912 to 1926, when Marshall Wilber sold the property. Throughout their stay at the house, Isadora Wilber kept diaries and ledgers, repeatedly noting the chill inside the house, at one point dropping as low as 44 degrees Fahrenheit. After their daughter Marcia died in 1916, at age 25, Wilber recorded that the house was “like a tomb.” By 1923, when the Theological Seminary had moved into Saieh Hall, just across the street, Marshall Wilber had grown old and his daughters had moved away. In light of his lessened need for a large house, he sold it to the Theological Seminary in 1926, beginning nearly 70 years of flux in the house’s status and fortunes.

Though the Seminary initially used the house as a dormitory, they “bought it with the idea that they would eventually demolish it to build a dormitory on the site,” Bagnall said. By 1941, the house looked evidently overgrown. As word spread of the Seminary’s plans to demolish, architects and preservationists began to raise the alarm. Planned demolitions like this, as well as the successful demolition of buildings like New York’s Penn Station, served as catalysts in the 1950s and ’60s for a larger movement to protect buildings with historical or architectural significance. Prior, the automobile boom and the development-minded philosophies of urban planners like Robert Moses had favored demolishing even “historic” buildings, if it meant something more idealistic could be built in their place.

Wright himself also campaigned on behalf of the house he designed, writing a number of letters to wealthy Chicagoans, in the process. In one of these letters to Sarah Adler, wife of Chicago clothier Julius Vile, he wrote, “The [Seminary] intends to destroy the Robie House. If you are so disposed, will you kindly address a protest letter to Albert W. Palmer, president of the Chicago Theological Seminary?” In the letter, he also calls the house a source of “worldwide architectural inspiration.” Other prominent Chicago architects, such as Ludwig Mies van der Rohe, joined committees in order to save the house. Ultimately, the Seminary had not raised enough money to actually build the new dormitory, and so their plans were put on hold. But the proposed demolition, and its resulting outcry, greatly raised the house’s profile. This would be only the first time that a close call wound up bolstering the house’s public perception.

The second attempt came in 1957, again on the part of the Seminary looking to expand, and again Wright himself campaigned on behalf of the house. He returned to Chicago.

“He does an interview in the press,” Bagnall said, “where he calls the house a cornerstone of American architecture, modern architecture, and that to wreck it would be like destroying a fine piece of sculpture, or a beautiful painting.”

Wright was nearly 90 years old by this point and famously commented, “It all goes to show the danger of entrusting anything spiritual to the clergy.” The city of Chicago had also just begun to establish the Chicago Landmarks Ordinance, with the Robie House on the original list of protected structures. Once again, a kind of mass mobilization arose around saving the house.

This time, the house avoided demolition when a development firm called Webb & Knapp purchased the house from the Seminary, using it as offices for their Hyde Park operations. Two fraternity chapters with houses in the neighboring area—one of which briefly had Wright as a member at the University of Wisconsin-Madison—also offered to vacate their premises, giving the Seminary ample space to expand and eliminating the need to demolish the Robie House.

The University purchased the house in 1962, but this didn’t mark the end of its unstable history. In 1967, it became the center for the University-absorbed Adlai Stevenson Institute for International Affairs, in turn becoming a hotspot for protests against American foreign policy in the 1960s and 1970s. One 1970 protest against the Vietnam War damaged portions of the house. The Institute would go on to be absorbed into the University’s Center for International Studies in 1975, but would continue to use the Robie House for public meeting rooms. Only in 1997 was the house given to the Frank Lloyd Wright Trust, dedicated exclusively to its preservation and maintenance.

After the Wilbers vacated the house, it took over 70 years for the house to become a completely preserved and protected building—despite the fact that the Museum of Modern Art was showcasing it as an important example of Modernist architecture as early as 1932. Wright’s work was much more prominent in Europe, Bagnall explained, buoyed by Wright’s Wasmuth Portfolio. “In the U.S.,” he explains, “it’s really the attempt to demolish the house that actually raises its profile.”

Other Wright buildings didn’t have the same happy ending. Bagnall cited the Larkin Building, built in 1906 in Buffalo, and the Imperial Hotel, built in 1922 in Tokyo, as examples of Wright buildings that lacked the renown necessary to avoid demolition, or were on the wrong side of the trend for architectural preservation.

“It comes down to the reputation and how that reputation grows,” Bagnall said. “With the Larkin Building, while it was a famous Wright building, it was demolished at a time when there wasn’t such a strong interest in preservation in the U.S. Its reputation wasn’t enough to save it.”

Architecture, as a medium for art, and as an expression of cultural heritage, is uniquely bound by its functional purpose. Architecture frequently has a duty to be used in a way that many other artistic works are not. In spite of Frank Lloyd Wright’s lofty position within the canon of American architecture, his buildings haven’t always been treated with the same care that the Wright Trust now works to ensure. The owners of a cottage designed by Wright in suburban Glencoe, IL filed and were granted a demolition permit just this June. A Wright-designed multi-purpose entertainment facility called the Midway Gardens existed in Hyde Park for just 15 years. Buildings, regardless of their importance, beauty, or novelty, have to contend with demands of functionality and new development. And the Robie House nearly met a similar fate to many other architecturally significant buildings: deterioration at best and destruction at worst.

But today, there are tours daily. The house looks pristine. And to most, it’s as much a part of the campus landscape as the Seminary Co-Op or as Saieh Hall across the street. For now, at least, it seems here to stay.