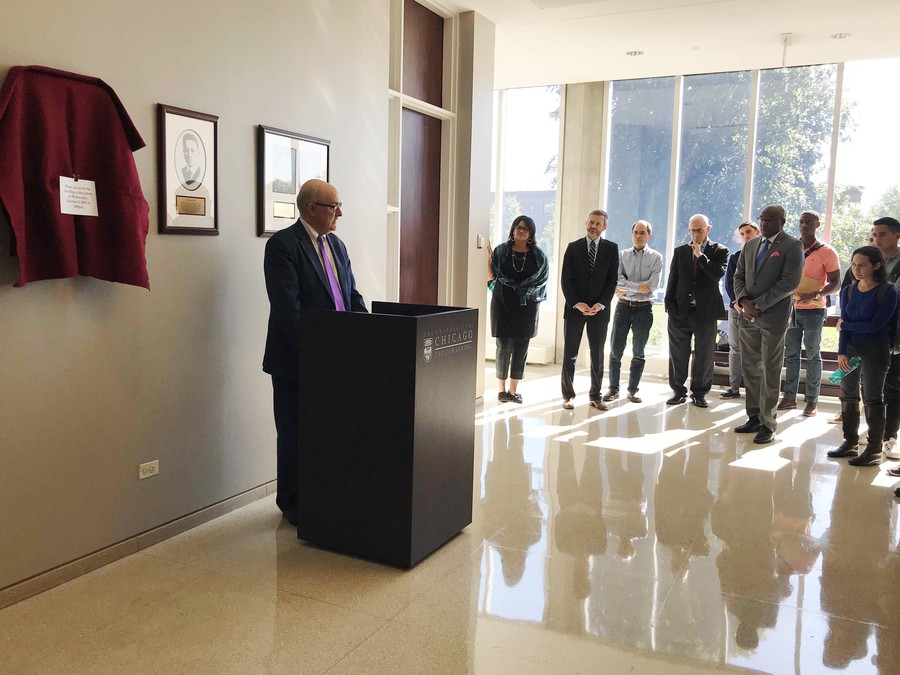 The University of Chicago Law School’s chapter of the Black Law Students Association (BLSA) unveiled a plaque on Wednesday commemorating the life and career of Nelson Willis, the first Black graduate of the Law School (LL.B., 1918).

Willis’s plaque is directly adjacent to another plaque commemorating Earl Dickerson (J.D., 1920), who was previously recognized as the first Black graduate of the Law School. However, recent research done by Adam Hassanein, a second-year student at the Law School, revealed that Willis had overlapped with Dickerson, and had actually graduated two years earlier.

“I saw the name [of Nelson Willis] referenced a lot, went downstairs to the composite archive, and saw the pictures,” said Hassanein, when asked about the process of making this discovery.

“I saw that he was a graduate of Tougaloo, did some more googling and found out that it was a Historically Black College, and [the discovery] came from there.”

Prior to coming to the University, Willis attended Tougaloo College, a historically Black college in Jackson, Mississippi. Following his graduation from the University of Chicago Law School with a Bachelor of Laws (LL.B.) degree, Willis became a prominent attorney and activist, ascending to a number of high-level positions, including president of the Cook County Bar Association and president of the Chicago chapter of the National Association for the Advancement of Colored People (NAACP).

According to Thomas Miles, dean of the Law School, Willis made a number of connections at the Law School which he maintained throughout his career. For instance, he met Dickerson, who is still the first Black student to earn a Juris Doctor (J.D.) degree from the Law School despite not being the first to graduate, and the two litigated several civil rights cases together.

The ceremony also featured comments from Kwame Raoul, the current Illinois attorney general and a graduate of the Chicago-Kent College of Law. Before assuming the office in January, Raoul worked as a politician and practicing attorney. In 2004, he was selected to fill Barack Obama’s vacant seat in the Illinois Senate and would hold that position for over 14 years. 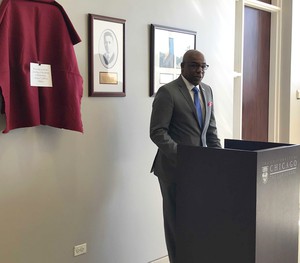 Both Raoul and Miles remarked on the tribulations that Willis likely faced as a Black student attending Law School more than four decades before the passing of the 1964 Civil Rights Act.

“This was 20 years after Plessy v. Ferguson, 30 years before Brown v. Board [of Education of Topeka],” Raoul said, adding that Willis carried a revolver to class every day due to the high rate of racist violence against Black people at the time.

“Imagine [Willis] coming here as the first student of his race: how isolating that must’ve felt, and how much courage it must’ve taken,” Miles said prior to the unveiling of the plaque.

Raoul continued, “I must confess, I was previously ignorant about the history about Nelson Willis, but I am proud to be here today to recognize firsts, because firsts knock down the door.”

Prior to the unveiling of the plaque, Raoul spoke to the BLSA, discussing his judicial life and personal story. He specifically mentioned the impact of growing up in Chicago around numerous members of the judiciary, including Jewel Lafontant (J.D., 1946), the first female deputy solicitor general of the United States, as well as the first Black woman to graduate from the University of Chicago Law School.

“I used to mow her lawn,” said Raoul. “Throughout my development, I had her along the way to encourage me.”

Raoul also talked about the importance of diversity in the justice system and law enforcement, particularly when it comes to preventing violence, saying, “We need to service the population with an understanding of untreated trauma.”

Later, Raoul discussed his decision to petition for a writ of mandamus—a legal order requiring a government organization to carry out its duties to the fullest extent—in order to potentially impose a different sentence on Jason Van Dyke, a former Chicago Police Department officer who was sentenced in January to 81 months in prison for the murder of Laquan McDonald.

Raoul’s petition ultimately failed after the Illinois Supreme Court refused to take up the case.

During a Q&A portion at the end of the talk, Raoul elaborated on his reaction to the Supreme Court’s decision, as well as his reasoning behind filing such a petition, saying, “Was I disappointed? No, I was mad. Because I knew that had the court gone to the merits, there would’ve been no choice.”

Later in the Q&A, Raoul discussed the benefits of using judicial discretion to minimize the effects of laws that are detrimental to the general public.

“I really believe in the individualized administration of justice,” said Raoul, adding, “I will use my job to inform the legislature of any unintended consequences of bad policy.”