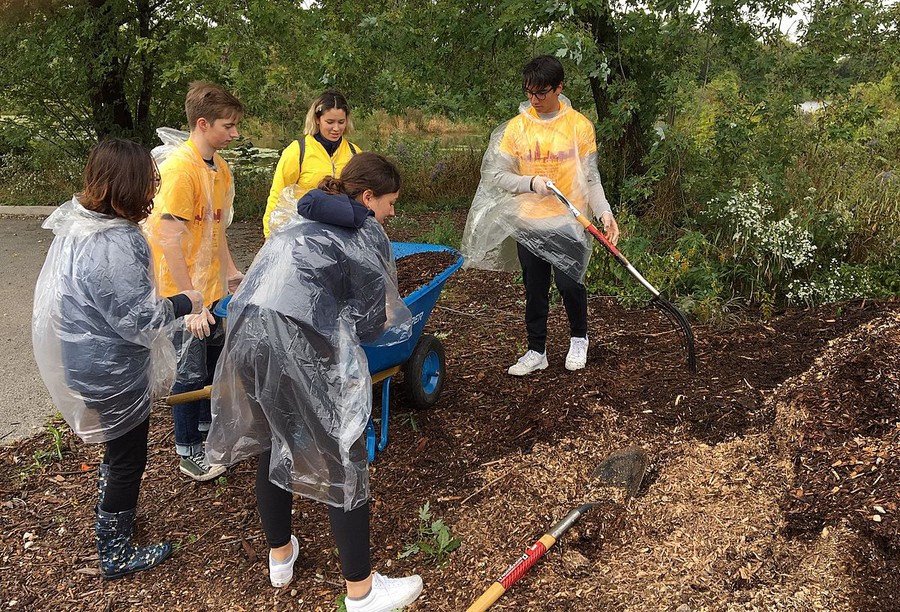 Incoming students take part in a day of service during O-Week.

A new, mandatory community service event during Orientation Week got mixed reviews from incoming first-years, some of whom said their help wasn’t needed at program sites.

The new event, entitled “Campus Life Meeting: Engage Chicago,” was described as an opportunity to participate “in meaningful service projects in the neighborhoods surrounding the University, not just as students, but as active community members.” A similar, optional event called “Engage Chicago Through Service” was offered in previous years, but this is the first year that incoming students were required to participate in community service.

The event took place from approximately 10 a.m. to 4 p.m., kicking off with an address to first-year students on the importance of service and community engagement. Students were then broken up into groups based on where they would be going, and transported to their assigned sites in school buses.

For many students, organizational kinks overshadowed the experience. First-year Jack Dewhurst described a thoroughly frustrating experience: Upon arriving at the offices of the Neighborhood Network Alliance, his group found only one employee, who was not expecting them.

“Nobody really knew how many [students would show up] or what we were meant to be doing. So me and four other people were assigned to paint this lady’s office, despite the fact that she did not have enough paint, there was not nearly enough time, and none of us knew how to paint this office…. Unsurprisingly, it did not go well, and her office is going to need to be repainted.”

Dewhurst said that another group assigned to the same site had no work to do and spent over an hour sitting in an empty room until some volunteers could be found to come talk about the work they did for the Alliance.

First-year Gabi Garcia was assigned to work at the Hermitage Street Community Garden, which was founded to combat the surrounding food desert. She says students in her group completed tasks like pulling weeds and organizing a tool shed to make the garden more functional for its users, among them many senior citizens and young children.

Although the experience was a positive one, Garcia noticed many areas ripe for improvement. Once broken up into groups for transport, students had very little direction. The person “in charge” of Garcia’s bus was a fellow first-year who had completed a Pre-Orientation program that also did a day of service.

Students were not warned of the kind of work they would be doing and many showed up unprepared. “Luckily I had thought to wear things that I could get dirty, but I could see that for a bunch of other people that wasn’t the case,” said Garcia.

Additionally, students in Garcia’s group were provided “an apple and some pretzels” in place of lunch, despite the fact that they were completing manual labor.

However, Garcia found the overall experience to be rewarding and says she plans to return on her own. “It just really kind of hit home, the fact that I am very privileged to be at this institution…. It’s just really important to me that this community can thrive the way that the University community and Hyde Park get to.”

When asked what he thought the University was trying to achieve with the Engage Chicago event, Dewhurst responded bluntly. “Good P.R. It seemed like the university was trying to [say] ‘Hey, 100 percent of our incoming class participated in service!,’ so they just like shoved us onto random, community organizations that were not prepared to deal with us. And it was a waste of time for everybody involved.”

So far there has been no news as to whether or not the event will be returning next year. The University News Office was contacted for comment, but did not reply to questions by the time of publication.