Williamson, an author, activist, and spiritual lecturer, came to campus on Friday for a podcast taping. 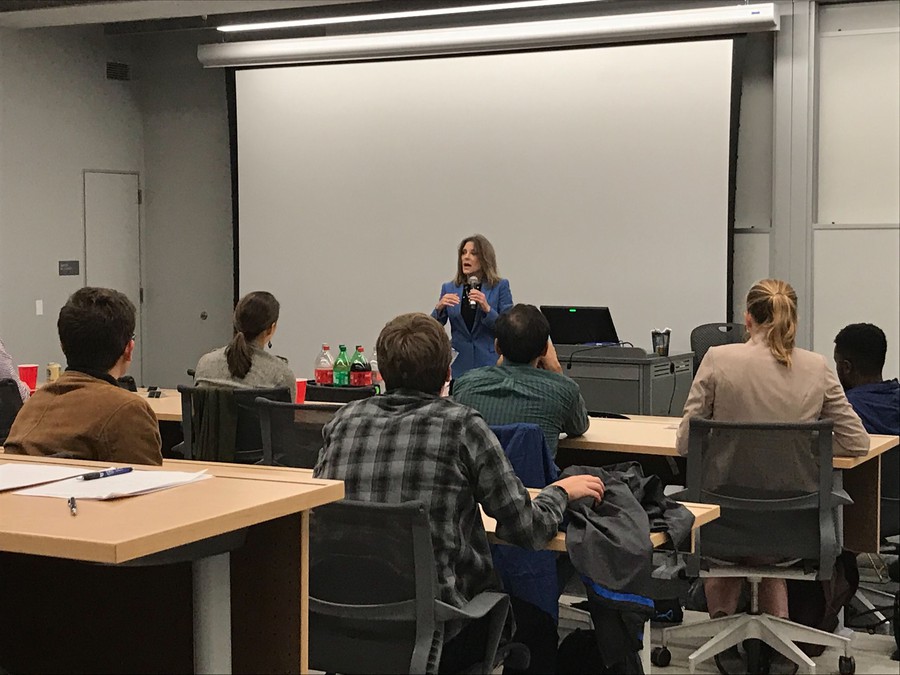 Williamson is an author, activist, and spiritual lecturer who spoke at the first two 2020 Democratic Party presidential debates, but did not qualify for the following two after failing to yield sufficiently high results in enough nationally recognized polls, despite reaching the 130, 000 unique donor requirement.

UC3P is a podcast series run by students at the University’s Harris School of Public Policy, as well as undergraduates, and has featured guests including former United States Secretary of Education Arne Duncan and Salam Al-Marayati, president and co-founder of Muslim Public Affairs Council.

Before the recording, Williamson spoke in front of a group of students from the Harris School, discussing various aspects of her presidential campaign.

“I am running because American public policy has become sociopathically soulless,” she said. Fixing that, Williamson said, “is going to take an intervention from the people.”

She then addressed the long-term effects of Reagan-era “trickle-down economics,” an economic strategy that involved cutting taxes on corporations and wealthy citizens with the idea that the money saved by upper-class citizens and corporations would eventually “trickle down” to everyone else in the form of job growth, pay raises, and other benefits.

“I don’t want to romanticize anything, but it wasn’t always like this,” she said. “[Trickle-down economics] has devastated the middle class…. It has created the largest wealth inequality since 1929.”

Independent studies from the Institute for Policy Studies show that levels of income inequality in the United States surpassed levels seen in the Great Depression after the 2008 financial crisis. The fraction of total United States income earned by the wealthiest 0.1 percent was just below 12 percent after the stock market crash of 1929, a record high that stood until the 2008 financial crisis, when that figure jumped to just above 12 percent.

When talking about potential ways to ease any adverse effects of trickle-down economics, Williamson said, “I agree with [fellow Democratic candidate] Andrew Yang on the issue of universal basic income.”

Williamson also discussed campaign finance reform, particularly with regards to wealthy donors and corporations with heavy monetary influence, saying, “We now have a situation where the government has become little more than a handmaiden to these multinational companies.”

“We need to get money out of politics because that is the cancer underlying all cancers,” she continued.

She then introduced her idea to create a Department of Children and Youth, which would provide a variety of resources to support children, especially those experiencing poverty. Williamson critiqued the widespread system of funding public schools proportionally to the value of property taxes that residents in a school’s surrounding area pay, calling it “wicked.”

During a Q&A portion, Williamson was asked what she would do to improve the country’s education system. Williamson replied, “There are enough ‘equality of opportunity’ cases to be made [to the United States Supreme Court], and I’ll have my White House lawyers work on that.”

She also mentioned a need for change in the public attitude on the potential to change the education system, saying, “What needs to be fixed first of all is in our thinking.”

Then, Williamson went on to propose a referendum to be voted on by citizens between the ages of 18 and 23, which would require every American between 18 and 26 to serve at least one full year of public service.

Williamson also discussed reparations for slavery and the atrocities experienced by Native Americans throughout American history, saying, “We’re not going to have a future until we figure out a way to clean up our past.”

Before running for president, Williamson was primarily known as a spiritual advisor. In the 1980s and 1990s, Williamson gained popularity for a lecture series focused on spiritual transformation. Later, she worked as a minister for the Church of Today in Warren, Michigan.

During the same time period, Williamson founded several organizations, including Project Angel Food and Centers for Living, designed to improve the quality of life of people suffering from life-threatening illnesses. She has also written 13 books, including A Woman’s Worth (1993), a New York Times bestseller that critiques societal perceptions of women.

Prior to her 2020 presidential campaign, Williamson entered the political arena in 2014. She ran for the United States House of Representatives in California’s 33rd congressional district, and finished fourth in the race.