We scraped the surface of Hyde Park's fusion food scene, asking all the hard questions as we ate.

By Veronica Karlin   and Perri Wilson 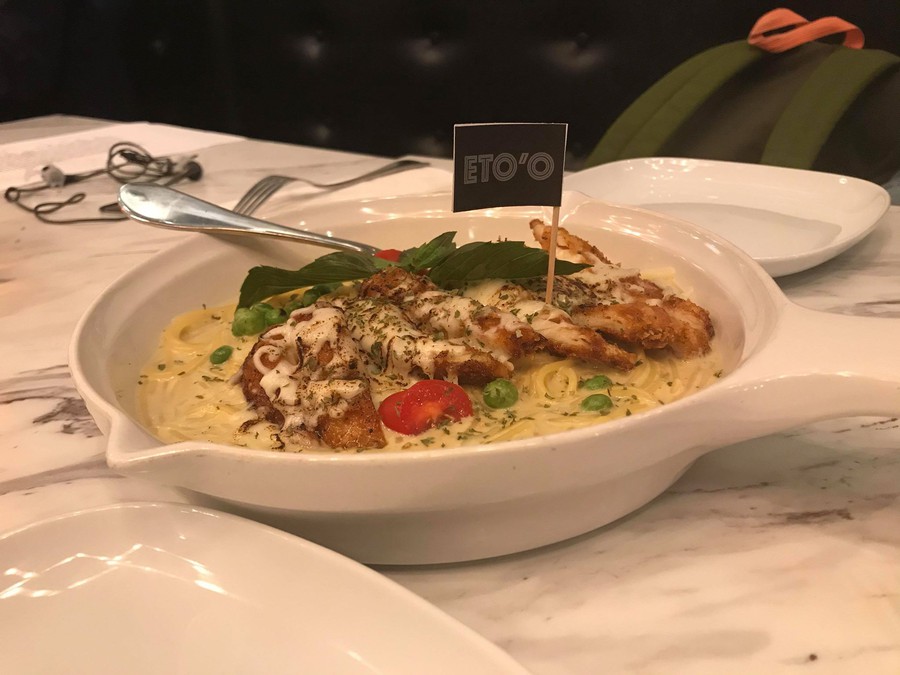 Like the moon landing, Eto'o marks the unprecedented achievement of their spaghetti with a flag.

“In the Middle of our journey of our life, I came to myself in a dark wood, for the straight way was lost.”

What do you get after a week of eating only fusion food? A lot of gas. But more importantly, one gets a more complete picture of what it means to be living in a globalized 21st century world, where ethnicity is used to justify blending trendy, but otherwise clashing, ingredients.

When searching for a restaurant in Hyde Park, you won’t come across many classic, conventional cuisines––rather, you’ll find yourself in a treasure trove of self-proclaimed fusion experiments. So we took it upon ourselves to delve into the fusion scene, asking the hard questions that keep us up at night as we scroll through the most mind-bending options on Postmates.

What draws us to fusion food in this day and age? Does anything fuse? Are some cuisines more conducive to blending than others? Even so, would that stop a Hyde Park restaurant from trying it? Have we become dissatisfied, jaded perhaps, with our unalloyed options? And at what cost? The answer to that last question, as we quickly realized, is usually around $10 per plate.

We started our journey at Eto’o, which flies under the radar to most Hyde Park residents. Notably, it is the first restaurant that comes up when you search for “fusion” in Google maps -its only defining feature. Nestled conveniently between Shinju and HP Currency exchange, Eto’o is a well-lit mystery of shiny tiles and geometric lighting. It claims to be “Asian fusion,” although we definitely got some non-Asian fused in there too.

Challenging ourselves to find the most unexpected twists on the menu, we decided to order from the Pasta section (not to be confused with the noodles section), settling on the Green Curry with Crispy Battered Chicken. A Thai take on a creamy alfredo sauce, the generic spaghetti dish was doused in a generous pool of coconut-y curry that gave a surprising kick. We found ourselves making use of the spoons at the end to drink up the last of the sauce. We were delighted by the surprisingly authentic Italian cherry tomatoes and shredded mozzerelle, delicately placed atop a Japanese-style katsu fried chicken. Sound too wild to be true? Both our minds and our guts can attest to its reality.

Day two was a lunchtime affair; we were both craving a light lunch, so naturally, we ordered the heaviest possible dish at Seoul Taco: Gogi and Waffles. In this heaping plate of sweet potato waffle fries, Queso Blanco, Beef Bulgogi, and Kimchi, there were many opportunities for a golden bite. While two p.m. on a Tuesday may not have been the best time to snarf down this monster, we agreed that it would make for a great, mature, and culturally curious feast. Unlike Eto’o, where the whole made up for some lacking parts, the elements of Gogi and Waffles were each virtuous for the sake of themselves.

Next stop on our list was Saucy Porka, a small Chicago chain founded in 2013, whose HP location opened up on 55th just over a year ago. Fusing flavors from Latin America, the Caribbean (Puerto Rico and Cuba) and Asia (more specifically, Vietnam, Korea, Thailand and China,) Saucy Porka’s menu is less provocative than it may sound. We tried a shrimp baco, a sweet and bready bao used as a base for a couple shrimps and kernels of corn. Their chorizo egg role was a dense, fried log of meat, but in the best way. As owner Amy Le explained in a statement for the Maroon on her approach to fusion food, “it’s taking all these beautiful ingredients from different countries and regions and letting them complement each other.”

Regarding the plethora of fusion restaurants, Le hypothesized that “living in a city like Chicago, where you have Little Village and Pilsen neighboring Chinatown, it’s almost like it was meant to happen.”

After a week of heavily fused meals (which happened to coincide with heavily rough digestion), we decided to see how far we could push the limits of fusion. How fused, exactly, do the flavors have to be for the restaurant to maintain its integrity? Naturally, we ended the week with one last sit down, at The Sit Down, which, as the owner informed immediately, is not a fusion restaurant.

“Long story short, initially we wanted an American bistro,” explained restaurant owner Sal about the conceptions for The Sit Down. But after another one opened up down the street (Park 52), they decided to change their vision. “I said we’re gonna do something funny. And I joked about it. Sushi and pizza. That was a joke, and the next day I called my cousin back and said, ‘It might be unique enough that it’ll work.’” We can confirm, it does work. Surprisingly, he’s found over the years that sushi consistently wins out, 55-45, no matter the season.

As we waited for our (completely un-fused) sushi and Italian sandwich to arrive, we observed that each table at the bustling Hyde Park joint could have been located in completely different restaurants--one neighboring table seemed to be having a festive Mexican nights-out vibe, complete with martinis, while two older women on our opposite side were having a serene Japanese supper.

We were informed that their pizza was thin crust, practically tortilla-esque, so we settled on a focaccia that was described as being pizza-bread. Why not?

After a week in the field, we used our chopsticks to pick at the fruit bowl and sushi platter alike, dodging any crossover between the soy sauce and the grapes. Overzealous about the prospect of fusion, and assuming that anything goes in the fusion world, we dipped our cheesy focaccia in wasabi soy-sauce. And it turns out, some things are better left un-fused.

With so much food in our bellies and new knowledge in our minds, we went back to the drawing board to tackle our original questions about the nature of fusion. Rather than ending our feast with a more concise conception of fusion, however, we ended with more questions than we began. So, we turned to some resident scholars for their opinions.

We reached out to Miles Wilson, a nuclear science engineering major at UC Berkeley (conveniently related to one of the authors of this article). When asked what fusion means to him, he responded that it has “earned itself a position as the idealists’ power... It is really amazing though, and I think that when it happens, it will completely alter the course of humanity. Like technologically, economically, everythingly [sic].”

While we think that Wilson may have overstated fusion’s potential, it has certainly transformed the dining habits of Hyde Park.