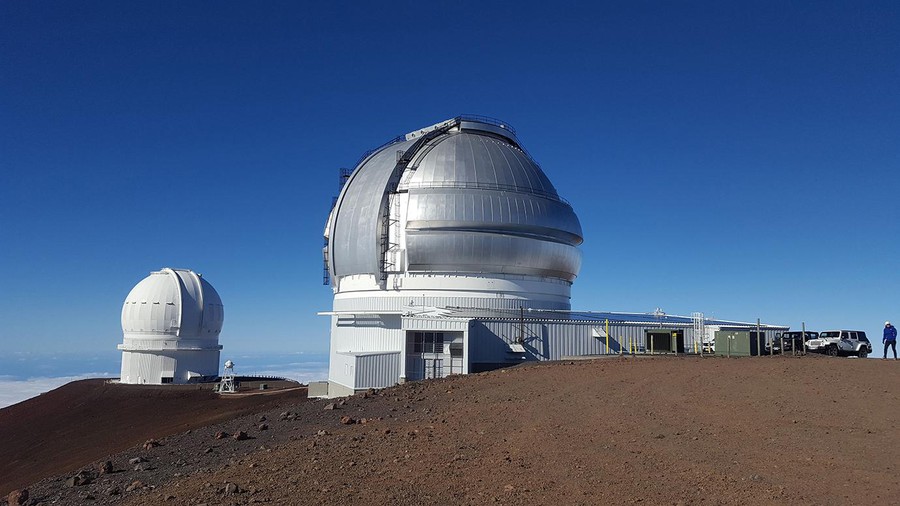 The instrument "MAROON-X" on Mauna Kea in Hawaii.

Scientists from the University of Chicago installed an exoplanet-searching instrument to the Gemini North telescope on Mauna Kea in Hawaii last month.

The instrument, dubbed “MAROON-X,” could detect Earth-like planets in other solar systems that potentially host life by observing changes in a star’s motion caused by the planet’s gravitational tug.

“It’s kind of like a radar gun for stars,” Bean said in a news release by the University earlier this month.

Its base, the Gemini North telescope, is operated under a multi-national partnership to conduct an array of astronomical observations alongside its twin, Gemini South, which is located in Chile.

Construction of MAROON-X began over six months ago in Chicago, but before the instrument could be attached in Hawaii, its pieces had to be completely disassembled and individually carried to the top of Mauna Kea’s 14,000-foot summit.

During MAROON-X’s commissioning in July, thousands gathered near Mauna Kea’s access road to protest the planned construction of the Thirty Meter Telescope (TMT), a 18-story telescope that would be one of the largest in the world.

MAROON-X is not part of TMT and was not the main subject of the protests. However, in a follow-up email, Bean clarified that while the protests were largely focused on the TMT, not Maroon-X or Gemini Observatory, “There is an element [within the protesters] that doesn't want there to be any astronomy on the mountain.” Bean estimated the Gemini Observatory to be approximately half a mile away from the TMT’s designated site.

Despite the Hawaiian Supreme Court’s approval of the $1.4 billion TMT project, protesters have argued that the TMT trespassed over sacred Native Hawaiian land, and that the telescope could damage the dormant volcano’s fragile ecosystem.

Bean told The Maroon that since Mauna Kea’s only access road was often blocked by protesters, his team faced several weeks of delays for the instrument’s commissioning. He also said the protests were exacerbated due to miscommunication.

“There have been mistakes on communication made on both sides. I think that the stewardship of the mountain has not been everything it could have been from an environmental point of view and with access to the public,” Bean said.

However, Bean voiced his support for the TMT, and said that he believed the protesters had been misinformed.

“The protest is spreading some disinformation, and there’s an element of demagoguery and populism at work here…. For example, it’s been claimed that the environmental impact on the summit is affecting the water table [topmost part of soil that absorbs precipitation], which is demonstrably untrue. There’s also been claims that these things are going to be powered by nuclear reactors, which is also crazy,” Bean said.

Bean also added that the astronomical community needs to learn how to coexist respectfully with the Native Hawaiian community.

Mauna Kea serves an important role for astronomers due to its unique geography and lack of human light pollution. “Because Mauna Kea is sitting out in the middle of the Pacific Ocean, the air has had time to stabilize and become very smooth, so the air sitting about [the mountain] has very low turbulence,” Bean said.

The University of Chicago is also collaborating with several other universities and five nations in the development of the Giant Magellan Telescope in Chile. When complete, the 24.5-meter telescope will be the largest of its kind in the world and cost $700 million.

This article was updated to clarify that Maroon-X was not protested and is not part of the TMT.

This article has been updated to further explain the connection between MAROON-X and the protests on Mauna Kea, and to include more details about the telescope the instrument is attached to.