Tents, Tufting, and Tradition at the Logan Center

At the Logan Center Gallery, "Tufting Gun Tapestries" presents and delineates the intricate and often painstaking labor of art and fashion. 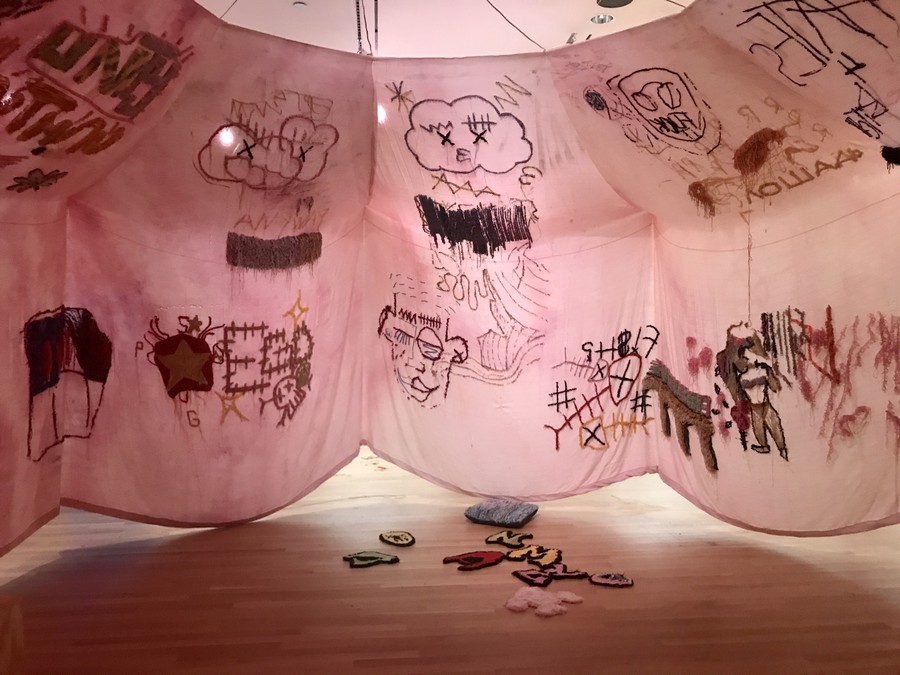 See "The Tent," on display in the Logan Center exhibition space as part of "Tufting Gun Tapestries," through October 27th.

A giant swath of pink fabric hangs draped from the ceiling and elaborate fashion pieces line the walls. Welcome to Tufting Gun Tapestries. This latest exhibition at the Logan Center opened on September 13 and features the works of UK–based architecture group Assemble, artists Duval Timothy and Demond Melancon, and students from the Material Institute.

The show originated in New Orleans at the Material Institute. Founded in 2018, the institute offers free fashion design classes to local residents. As the home of Mardi Gras, fashion and costume design has a long, proud history in New Orleans.

Students at the Material Institute are taught how to use natural dyes, do beading, and use a tufting gun, among other design skills. All of these elements are reflected in the exhibition. The students had roughly a month to create the works on display. The materials and tools used for the projects, such as colorful spools of yarn, tufting guns, and even the natural plant materials used to make dyes, are displayed on shelves along the walls. The designers’ preliminary sketches also accompany many of the pieces. The effect is a welcoming invitation to the visitor to witness and meaningfully connect with the process firsthand.

When asked about the significance of the materials and process, Timothy and Assemble’s Maria Lisogorskaya and Louis Schulz wrote, “In the initial composition of the Material Institute we are interested in a diversity of voices, from the traditional, local, hands-on and timeless to the contemporary, ephemeral and global cultures involved in garment and fashion production. We decided to explore the carpet/tufting technique as another tool in our textile palette; we were excited about the contemporary ‘gun’ as an accessible tool to something traditional and associated with laborious hand craft, and also the image of a ‘gun' as something [creative and non-destructive]. Including the tools and materials helped to visualize the processes involved in tufting and dyeing, which the viewer may not be familiar with.” While the students did each project individually, they learned the techniques as a group and were advised to think about how their pieces would fit into the collective body of work.

The connection to the history of New Orleans throughout the project was aided by the teachings of Melancon, a well-known Mardi Gras Indian suit designer from the city. According to a video shown at the exhibition, Melancon cites African and American history and the expansive world of fashion in New Orleans as inspiration for his work.

References to the past paired with the modern subject matter make the pieces on display feel both familiar and surprising. A pair of belted gaucho pants hangs on a wall, with the words “Future Capital” tufted backward down one of the legs. At the bottom are two arrows that resemble the recycling symbol. While challenging the boundaries of fashion, one can still imagine taking them off the wall and wearing them around campus. Other pieces look equally wearable, from Manolo Blahnik shoes tufted with blue and pink yarn to a tufted purse that unwinds toward the bottom, practically dripping onto the floor. These pieces question and blur the distinction between gallery art and everyday, functional clothing.

While many of the other works directly reference clothing, The Tent is one that differs from this theme. Its massive size and splotchy pink color draws the eye immediately. This is the only piece in the exhibition that was worked on collectively by all the artists. The fabric appears delicate and translucent. The pink cloth is covered with embroidery, but the designs are reminiscent of doodles one might find in a school notebook, replete with words and random letters.

When asked about The Tent, the artists wrote, “The idea was to create a vast tapestry that everyone could contribute to, which also operates as a sculptural and potentially functional space. We made a few models and talked a lot—we ultimately were keen to make the structure from one continuous piece of fabric. Dyeing at that scale was hard work and really fun partly because it was impossible to fully predict the outcome. From there it operated as a giant sketch pad for everyone to doodle on with the tufting guns.”

From the side, one can peek into the tent and see a snake and embroidered letters scattered on the floor. From this perspective, it looks almost as if the pink fabric is floating off the ground, and the glow of the light filtering through is inviting and magical. Even when empty, the space looks like it is meant to house many people, reflecting the collectivist spirit of the project as a whole. The exhibit’s unique pieces are united by the shared techniques and history reflected in The Tent.

When I visited the exhibition, I couldn’t help but think about the way most clothing is produced today. I looked down at the dress I was wearing, one of my favorites, and realized that, like so many other pieces I own, it was probably mass-produced in a factory. What were the conditions in that workplace like? How much wasteful byproduct was generated in the making of the dress? Which chemicals were used to dye the yarn? None of the answers were readily available to me. But when I looked around the room, each of these questions could be answered for the works and objects on display.

On the topic of what they had learned from the project as a whole, one of the artists wrote, “Cutting fabric, dying yarn, weaving and sewing are really labor intensive, skilled processes, so it actually made me appreciate how these processes are done on an industrial scale even more; it’s really impressive. The exploitation of people and environment in the industrial processes is obviously upsetting and needs to improve a lot. Learning these processes at the most fundamental craft level in a hands-on way can stimulate ideas and create a pathway to improving the larger industrialized processes.”

As consumers in a world that is threatened by climate change, health crises, and nontransparent businesses, Tufting Gun Tapestries is a call to recognize the history and making of everyday clothing and artwork, and to educate ourselves about how we can promote sustainability and awareness with our fashion choices.