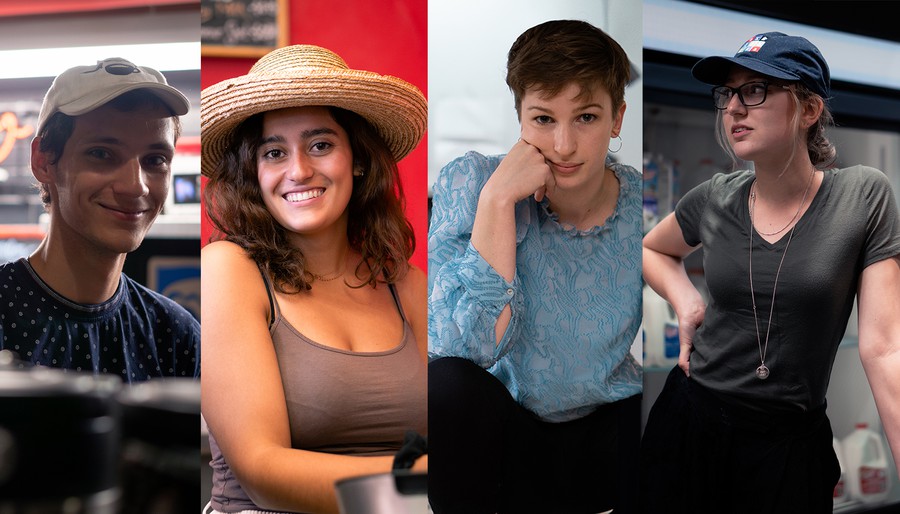 Four employees that work in cafes across campus.

The Maroon spoke to four employees from Ex Libris, Harper, Grounds of Being, and Cobb, who told us about what their work was like and what made their shops special. From Ex’s inability to play music, to the fact that people used to watch birth dates being selected for the Vietnam War draft in Cobb, the conversations took turns that might be more surprising than you think.

Parker McWatters, Shift Lead at Grounds of Being 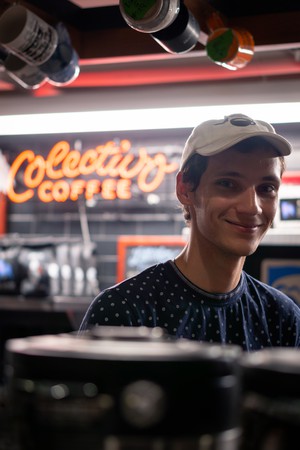 Parker McWatters, Shift Lead at Grounds of Being

Adrián Mandeville: What sets Grounds of Being apart from the other coffee shops?

Parker McWatters: The money we’re making here goes back to the Div School students, and that’s big because we don’t know where the money that the other cafes make goes. So that’s pretty cool—it goes to the students in the Div School and helps with financial aid and stuff like that. Cobb’s in a basement but we’re in a basement and we make espresso drinks so we’ve got that going for us. I think the vibe here is pretty different—we’re allowed to play music which is cool. We’re really high-volume—you can go really fast or you can sit and chill for a while and both are really nice! There’s not totally a place like it on campus. Ex is great, I love Ex—I work there too—but it is in the Reg so it’s kinda hard to escape that shadow. Besides that, Grounds of Being is a pretty active place. We’ve got all these posters and stuff up which is nice—that’s something that the other shops don’t have, they don’t have control over their space because they’re with the University so that’s kind of a cool thing we can do.

AM: What’s your crowd?

PM: Mostly grad students and professors. A lot of professors come in here every day and order the same thing. We have tabs here which they don’t have at any other cafe, but those are for faculty staff and people who are here regularly enough to get it. We also have the mug club—the mugs that are hanging that you can see there. You come in and pay $5 a year and you can hang your mug up. We get a lot of undergrads too but I feel like they’re spending all their time in the Reg so they mostly go to Ex.

AM: What kinds of challenges does Grounds of Being face?

PM: We’re cash-only which is great because we don’t have to deal with the credit card machines breaking and the Maroon Dollars going offline which they do all the time. But the number of people that come in and hand us a credit card and we say, “We’re cash-only,” and they go “Oh!” and they just walk away and we have to put all their stuff back because they don’t do it or they’ve already poured their cup of coffee and they’re like, “I’ve already poured it it’s just gonna go to waste!” and I’m like, “I’m not just gonna give you free coffee, man.” It also gets really warm in the basement, which I guess is nice in the winter, but in the summer and fall right now it can be kind of miserable especially when you’re on your feet for five hours. I’ve definitely gotten the most rude customers we’ve ever had here but usually people that are rude, it’s just like a bad day for them and we get that, we move on.

CM: What do you like about being a barista at Grounds of Being?
PM: I’ve worked at Ex, I’ve worked at Harper, and I’ve worked at Hallowed, I just need Cobb—if they read this tell them to hire me! One thing I really enjoy about this is that everyone behind the counter except for me and one or two other employees are grad students. So this is something very serious for them, this is how they make money. At Ex our staff is 50 people, but our staff is a lot smaller here, so we’re at half the size or a third of the size and everyone is very serious about like, “I wanna do a good job because I need this job” and it’s not like, “Hey, I just need some money,” although there’s nothing wrong with that. It’s nice, it’s a very serious environment. That’s sort of my speed—I’m definitely pretty intense on shifts. 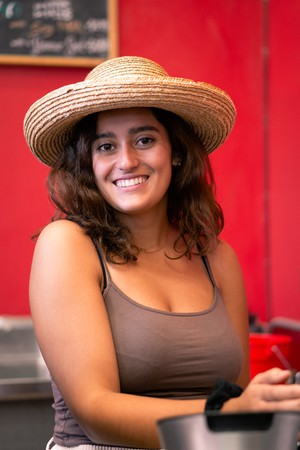 Adrián Mandeville: What does it take to be a Harper Barista?

Sofia Cabrera: It takes a good amount of teamwork, a good sense of humor, and a good taste in music. We are one of the busier cafes on campus, so you do have to have a good work ethic, you have to know how to make coffee (obviously), and how to make a good espresso for anyone that comes in. It’s all about collaborating and stuff like that.

AM: What kinds of people come to Harper?

SC: We get a good mix; we have families come in, advisors come in, Dean Boyer comes in sometimes, and the grad students and undergraduate students. It’s really a space for people to do collaborative work or grab a coffee if they’re heading into the reading room or their office. It’s also a location on campus tours so sometimes we get prospective students and their families.

AM: Why do people come to Harper? What’s your specialty?

SC: We have our cake balls which no other cafe sells, they’re really good, and they’re a dollar fifty. We’re more of a workspace like Ex but we have music so it’s a little more lowkey. We’re warm all the time so if you’re really cold come to Harper and warm up! The heating here is insane. I just think it’s a nice, cozy environment if you’re coming to have a meeting or do some work. At night it’s definitely quiet and lowkey, there’s one barista on shift playing whatever they feel is right, and you can chill with your friends and do your readings.

AM: What kinds of constraints does Harper face?

SC: The advisor offices are right above the cafe so during work hours we have to keep our music at a pretty low volume so as not to disturb them up there. Last year we had a bee infestation problem in the Harper building so we had to keep the window closed in the little back closet thing which was really annoying because it was really hot in here, but we didn’t want bees coming in. They’d get stuck in the pastry case, it wasn’t safe. 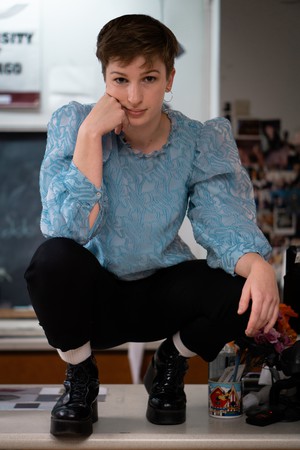 Adrián Mandeville: How has Cobb changed?

AnnaClaire Fields: It’s common practice to reminisce about the “good old days” of Cobb when employees stored dead birds in the refrigerator and recreationally sliced each other’s abdomens. This kind of nostalgia is nauseating and not particularly well-founded. People who have been around for a long time will tell you it hasn’t changed at all. Cobb certainly has a distinct legacy—one so well-established it doesn’t require description—but its mythologization is an ongoing and active process. A tradition is not separable from the present nor is it contradicted by its product. I don’t feel obligated to live up to a past ideal any more than I feel obligated to interrupt a conversation with a coworker to help a customer. Why would I care what your alumnus older brother said about how things were five years ago?

AM: What do you like about working at Cobb?

AF: For me, partaking in Cobb’s unique lineage is one of the best things about working here. A significant part of my life has played out and passed in this basement. It’s a ground as much as it is something to identify with. The entanglement of Cobb and my time at the University feels uniquely personal and almost uncontainable, but innumerable kids have come and gone and had the same experience. This shared attachment is the material of the Cobb legacy. It makes it special in a way the associated aesthetic never could, and its propagation ensures the best version of Cobb is always the current one.

AM: Do you have a favorite tidbit of Cobb history?

AF: Today a customer who was an undergraduate at UC during the Vietnam War told me about how she and her friends would come to Cobb to see the birth dates selected for the draft on the television. I guess that’s history for you.

AM: What does Cobb have to offer?

AF: This year we have milk tea and quiche—both are top-notch. 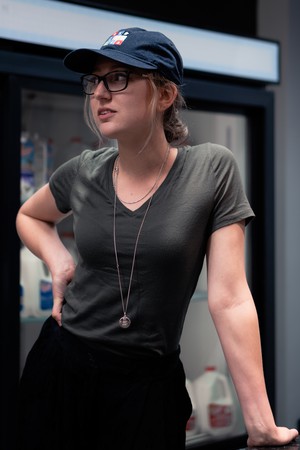 Adrián Mandeville: What does it take to be an Ex Libris barista?

Carolyn Hammond: It takes a certain amount of resilience mentally and sometimes physically. Words can't begin to describe how much I love everyone I've worked with here over the years. Not to be corny with a metaphor, but take latte art. In order to make it happen, you need good foundations: The espresso and milk need to have similar consistencies, and your pour has to be just right. Ex Libris strikes that same sort of beautiful harmony—a balance between resilience, a healthy level of idiosyncrasy, and a love for the craft.

AM: What sets Ex Libris apart?

CH: We have larger groups of baristas on shift, and the work is focused on how we work together and support each other under high-stress situations. Experience like that forms some tight bonds between staff. Not everyone can be best friends—you can’t possibly be best friends with 40 people—but everyone is always friendly and we bond over weird stuff that can happen on shift.

CH: I guess we do have our dedicated cult following. There are people that spend almost as much time in Ex Libris as we do, if not more. Over the years, I've certainly made some of my closer friends through the job both behind the counter and among our groupies. Serving someone coffee consistently, sometimes over the course of several years, definitely creates a unique sort of connection! There are still some people I recognize around campus only as “Small Dark Roast With No Room.” I think the reason people come here is because we tend to be really consistent in what we do.

AM: What kinds of constraints does Ex Libris face?

CH: We are the one cafe that’s run by students that’s not allowed to play music, and that’s actually because we’re under the jurisdiction of the library in addition to being under the jurisdiction of the Student Involvement Centers. It’s one of those things that takes away from what the vibe could be in here versus what it is in here. We also don’t have a microwave. We used to have a microwave, and then someone decided to microwave fish and the library decided that they didn’t like the library smelling like fish so they took away our microwave.