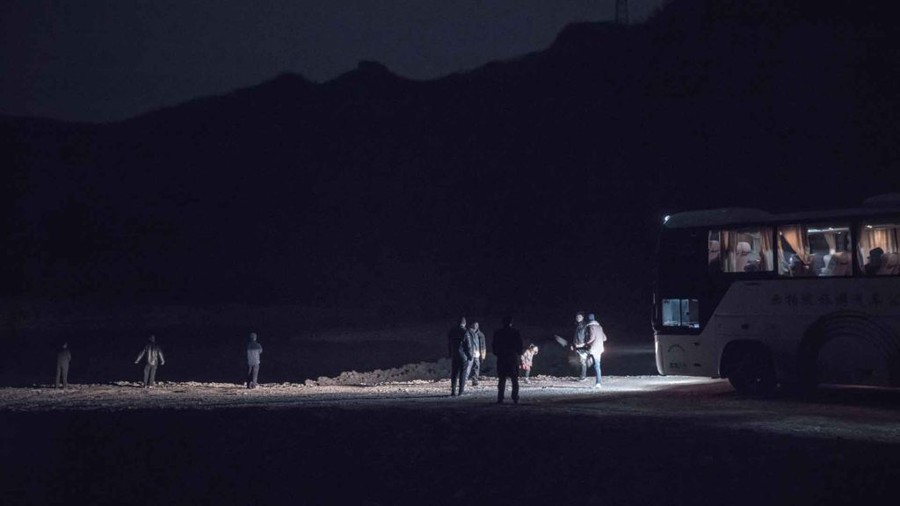 Like a surreal elephant's trumpet resonating from an impossibly far distance, an unreachable hope humanizes four dissociated characters as they trudge through the bleak banality of life in "An Elephant Sitting Still."

I walked out of Doc Films theater for a break after my second time seeing An Elephant Sitting Still with vertigo and an acute soreness in my body. For this screening, Doc welcomed the film’s director of photography and director Hu Bo’s longtime friend from film school, Fan Chao, who flew in from Beijing for a Q&A session.

I heard about the film before its festival circulations and prestigious international prizes—before its booming success—from Zhang Yu’s, a mutual close friend of Hu’s, open letter. Zhang, an actor who played one of the film’s leads, wrote in mourning not long after Hu Bo’s suicide on October 12, 2017: “Hu Bo embarked alone, and took the lead to arrive. He will no longer be expended... Hu Bo...did you laugh before you arrived? Yet ever since last night, that heavy thud has rung in my head. I want to be happy for you. I can’t.” Hu Bo was 29.

Back then, Elephant was a four-hour-long debut feature written by a stubborn young filmmaker who was threatened and pushed into an impasse. After a troubled production characterized by the producers’ spiteful insistence to limit the artist’s direction—everything from malicious cost-cutting to constant tirades of verbal abuse beating down on Hu’s “foolish” artistic ideals and visions—Wang Xiaoshuai, an established Chinese arthouse director and the film’s co–executive producer, along with his wife, Liu Xuan, gave Hu Bo two choices: either cut the film down to two hours for distribution, or lose all directional credit.

The matter dragged on unresolved for months until Hu’s death, after which Wang donated the rights to Hu’s parents amid controversy.

After all, as our guest Fan Chao recounted, Hu began the script with the idea that every scene would be captured in one take. The film is premised upon the experiential and aesthetic power of long takes; the very nature of its lifeblood, its idea, necessitates its length.

Hu’s cinematic language is composed purely of masterful, unbroken, long sequences, which follow the four main characters as they navigate their bleak industrial town. They all resemble ghosts. Watching their attempts to seek dignity and justice shatter in a miasma of violence is so banal and all-consuming that one could only (barely) hang on within the paradox of misanthropic conclusions. Life is to be endured, and the audience feels that weight.

In each of their totalizing and traumatic crises, the characters individually reach a collective hope, eventually embarking on an escape trip to see a semi-mythical elephant which does nothing but sit absolutely still in a circus. It’s a paradoxical, all-out leap of faith taken only by the truly despaired—a self-deprecating joke on one hand and the final prayer for a miracle on the other. The titular elephant, notes Fan Chao, is a surreal creature in northern China, bordering on the absurd. We do not see it, but in the final moment of the film, we hear its cry, impossibly crisp and resonant, sounding from a faraway place of imagination made reality. The characters stop to listen to the fantastical sound in solemn awe, their bodies lit in the singularly focused, defiantly bright front lights of the bus stopped on the night road towards Manzhouli.

In extremely shallow focus—a cinema of dissociation—Hu blurs out everyone other than the four protagonists into “a homogenized form of external pressure, applied from society to our characters,” as Fan explains for Hu. The alienation of the all-blurred landscape and the eternally unclear face of the interlocutor is immersive and crushing, but the characters become obsessively detailed, razor-sharp, and paradoxically both realist and larger-than-life, embodied and dissociated. We follow the characters, compelled but growing in despair, trudging with them through the routine and the pain that compose life. We, like the characters, are eternally waiting for a hope too good to be true. As screen time begins to match narrative time in its unbearable slowness, the anxious blank spaces in time become increasingly oppressive, despite protection by the dimensional separation of those inside and outside a screen.

When asked if Hu ever considered an audience, Fan said Hu aimed to offend them. Within the mise-en-scène, we are at a close distance with the characters, sometimes uncomfortably so, to the point of disfiguration of their faces by harsh light and perspective. The characters move in purely natural, realist, dim lighting—the crew “even shut some existing blinds and turned off extra lights,” Fan described. They appear as shades of dark, alien silhouettes indoors, or as numb, frail, isolated individuals in the bleak, foggy, desaturated outdoors. And at times, the obsessive sustained focus loses us, and the four protagonists disintegrate, just as the dissociated lose touch with themselves.

This is a film language that humanizes the alienated. It grieves and rages for them, and moves the audience to do so in a parallel reality where we are as separated from the characters as we are now from Hu Bo, who cast his shadows in these characters, but left the ugly, desperate world it vividly portrays—taking the lead to arrive.

Fan Chao made clear his differences from Hu Bo. He doesn’t like arthouse cinema; he prefers commercial film, citing Alfonso Cuarón. “If [Hu] wasn’t a film school classmate and friend, but a rando with this story, I wouldn’t have done it…. It’s too much. In college, his short films were even more ‘fly’ than this… it was [cinematic] poetry more than it was prose.”

I asked if Hu was like a lone believer; Zhang speaks of asking him repeatedly if the film wasn't too long, and so on. Fan laughed, “I asked the same thing. But he is interesting. The way he talks, he convinces you. He doesn’t talk much usually, but when he’s on set, everyone is convinced. If he was here now, everyone here would be convinced. But he’s not here now. So, all we have is what he left behind.” A period of silence followed, opening up the air in the theater for a tiny, poignant moment, for a current of grief to pass through and make its mark physically, more or less, on friends, indirect friends, and viewers alike.

Hu’s mentor and greatest inspiration in the film industry, Hungarian filmmaker Béla Tarr (Sátántangó, The Turin Horse), whose long takes last around 10 minutes, writes of Hu, “Shit! I feel guilty I couldn’t protect him properly. It’s a shame. But how can one protect a person constantly surrounded by a storm?... He burned his candle at both ends. He wanted to have everything right now. He couldn’t accept the world and the world couldn’t accept him.”

Here we are, three weeks past the two-year anniversary of his death. This is a tiny tribute of remembrance and gratefulness—for his deep compassion in his anguish, which passes through his art and language into the viewer and comforts us, expecting nothing in return.

Several of the comments included in the article were translated by the author herself. The original Mandarin letter is here.