The Answer to Grad Education Woes? It’s Still a Union 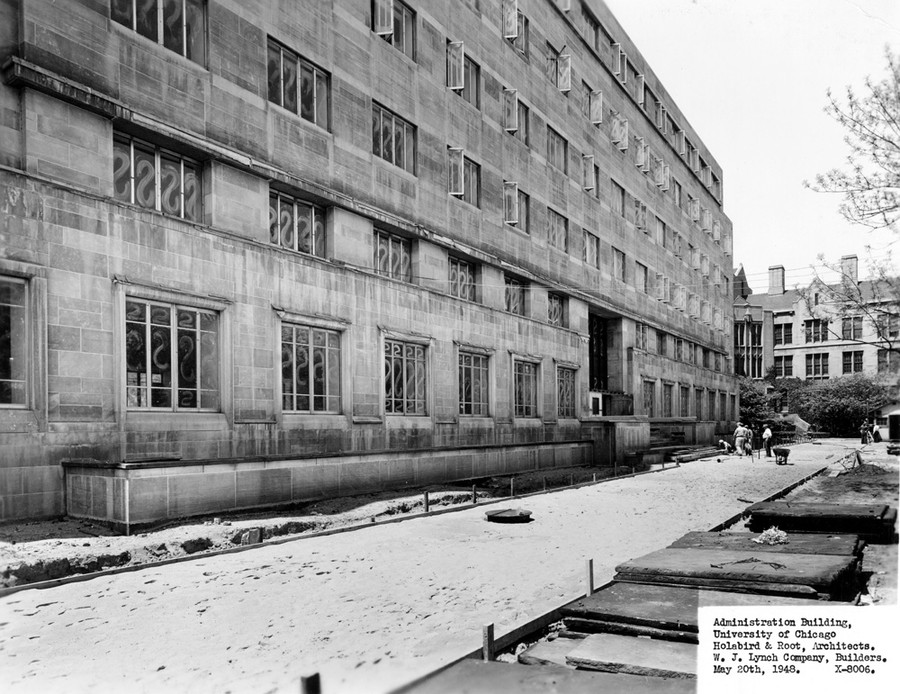 The old Administration Building, circa 1948

The University’s primary objection to graduate student unionization has long been that a union would drive a wedge between graduate students and faculty, creating a layer of bureaucracy and interfering with faculty autonomy in program design and instruction. Ironically, recent changes to the structure of Ph.D. programs will have exactly this effect.

“Unionization would fundamentally alter the decentralized, faculty-led approach to graduate education that has long been a hallmark of the University of Chicago,” he wrote (emphasis ours). “A collective bargaining agreement would likely create an environment of standardization without room for differentiation, changing the nature and scope of the relationships of graduate students to their advisors, other faculty, and degree programs.”

Four months later, on October 8, Diermeier announced sweeping changes to graduate education. Key among them: cap sizes on Ph.D. enrollment in the Divisions of the Humanities and Social Sciences, the School of Social Service Administration, and the Divinity School. Those sizes have not yet been decided, but the Office of the Provost states unequivocally that the Ph.D. population will shrink.

To maintain the new, smaller program sizes, faculty will need to move Ph.D. candidates through their programs more quickly—or kick them out—before bringing on new students. By placing the burden on faculty to rush candidates through their programs, the administration is interfering in the relationship between faculty and students and impairing departmental autonomy in exactly the manner it threatens a union would do.

The new changes expose the dishonesty of the administration’s stated aim to guard the faculty-student relationship—and departmental autonomy—from interference.

Faculty members had little say in these changes, which retrofit a one-size-fits-all structure onto disciplines with different needs. True, the cap sizes will vary by department and will be determined by deans “in discussion with the department chairs and faculty,” according to a University spokesperson. But it seems obvious that all departments will press for the fewest possible cuts, leaving decisions on how to allocate resources largely in the hands of administrators.

Administrators point to the report by the Committee on Graduate Education as evidence that faculty views are represented in the changes, but the eight faculty members on the committee were handpicked by the provost. The report—while a useful diagnostic tool—has no real claim to speak for the faculty.

Indeed, members of the Council of the University Senate were not consulted, and learned of the changes along with the rest of the University in their e-mail inboxes. Bypassing the faculty senate is a particularly glaring misstep at UChicago, a university that has historically been comparatively decentralized, granting impressive autonomy to academic departments and schools.

Our further concerns about the new changes are neatly sketched out by linguistics professor Jason Merchant in his 2016 Chicago Maroon op-ed, Cui Bono?

“Even if union negotiations were to lead to higher individual stipends, it is likely that they would be paid for at least in part simply by reducing the number of admitted doctoral students: and anything that curtails opportunities for higher education would endanger the ecology of teaching and research that is crucial to the success of our Ph.D. programs,” Merchant wrote.

The irony here cuts deeper than the fact that, having declined to recognize GSU, the administration has announced its intention to shrink the graduate student population. Merchant, now vice provost, could not have put it better: It is precisely the ecology of teaching and research that is undermined by shrinking program size.

Since the changes were announced, faculty have called attention to adverse effects of capping department size—consequences that might have been pointed out if professors had been consulted on the design of the reform.

Programs need a critical mass of graduate students to continue functioning, and subfields like Byzantine history, medieval literature, Assyriology and other smaller programs could be suffocated by the squeeze on admissions, faculty pointed out.

Others said that with fewer spots and students expected to graduate in fewer years, faculty members will be doubly incentivized to play it safe and admit students with unimpeachable pedigrees. This not only means that they may recruit students from costly M.A. programs, but also that they will think twice about recruiting students with interdisciplinary backgrounds or with experimental proposals that are not tried-and-true.

The provost’s changes aim to address serious problems. Time to degree has drifted up; as tenure-track posts have dwindled, students who do not see academic openings in their field bottleneck around the end of their degree programs, postponing graduation like airplanes circling over the airport waiting for the runway to clear. The University’s expansion of postdoctoral teaching fellowships is a partial solution: It provides students a much-needed landing pad, even as it diverts resources away from tenure-line hiring, compounding the macro-level problem.

Likewise, the guarantee of funding for the duration of students’ programs is laudable. While this guarantee is undercut by the corollary announcement that the size of the Ph.D. population will shrink, taken together, these changes are far from a money-saving measure; depending on final cap sizes, the University appears poised to spend considerably more money on grad students.

The administration has identified serious issues with graduate education that deserve substantive solutions. However, the University’s insistence on a top-down process, which involves little to no input from the faculty and students affected by these changes, is not the answer. Solving these problems requires the deep engagement of faculty, students, and administrators in a deliberative process. In other words: GSU.

Editor-in-Chief Lee Harris and senior News reporter Darcy Kuang recused themselves from this editorial due to related reporting.