As Protect Our Parks protesters tied red ribbons around trees threatened by the Obama Presidential Center development, they were confronted by several counter-protesters. 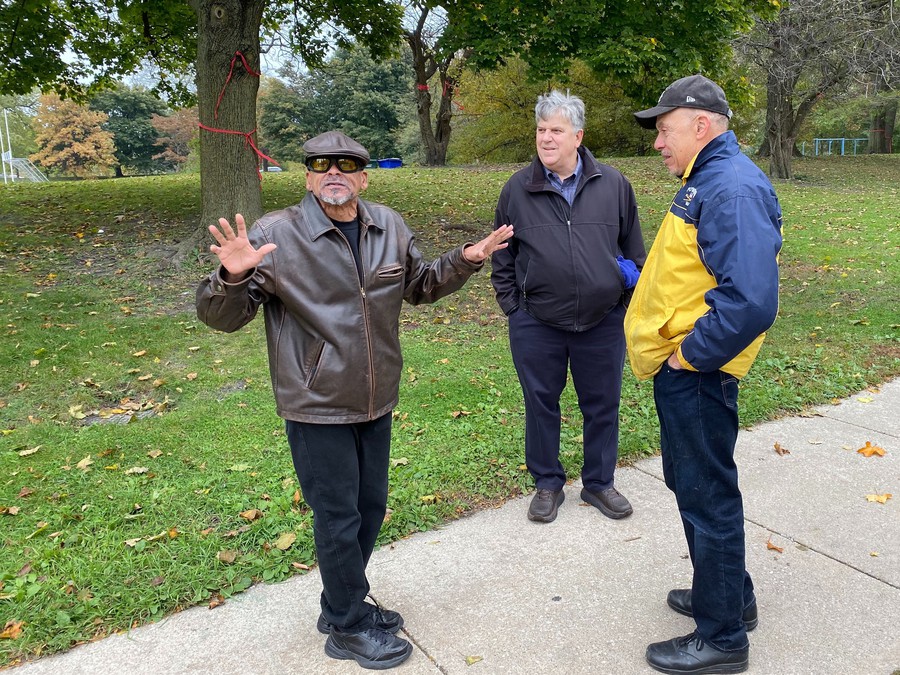 A counter-protester speaks to two PoP protesters. In the background, a tree slated for removal sports two red ribbons.

On Friday, POP appealed its lawsuit against the city and Chicago Park District, which attempted to block construction of the OPC in the park.

Charlotte Adelman, a protester and plaintiff in POP’s case, said she filed the case because “I did not want to see the destruction of hundreds of mature trees in a migrating bird flight path.”

Adelman believes the planned OPC is disrespectful to the vision of renowned landscape architect Frederick Law Olmsted, who designed Jackson Park in 1871.

“His memory is being desecrated in order to build a commercial building,” Adelman said.

Ross Petersen, a POP member and former president of the Jackson Park Advisory Council (JPAC), does not believe that the new trees that will be planted as part of the OPC development will adequately replace the old ones, some of which are over a century old.

“If you were to chop all these down and plant saplings, basically that would be fine if you could get into a time machine and come back in 150 years,” he told The Maroon.  In the short term, however, “you’ll see a bunch of scrawny saplings.”

“Mature trees anchor us and remind of us of time and history and our place in it,” he told The Maroon. “New trees don’t have the same effect—both in terms of nurturing the environment and cleaning the air—but they also don’t mean the same thing to us as humans.”

Not all community members were pleased by the demonstration. South Shore resident Juan de la Rosa confronted protesters, loudly telling them, “You all need to stop.”

“They’re just doing this in their interest,” he told reporters, adding that “the city needs the money.” He also drew attention to the racial makeup of the protesters, nearly all of whom were white. More than half of Hyde Park residents are people of color.

Several individuals were present in opposition to the protest, including Erin Adams, the chair of South Side Neighbors for Hope, a member of JPAC, and Professor of Biology at UChicago. She said that she believes the OPC will bring with it both an improved park space, and improved biodiversity with newly planted trees and other plants.

“This is going to be kind of a smaller version of the Maggie Daley Park, yet it’s going to be on the South Side, so kids aren’t going to have to go all the way downtown to actually be able to enjoy something like that,” she said.

POP says it does not oppose the construction of the OPC, but would like to see it built on an alternative site in order to preserve Jackson Park’s current landscape.

“It would [bring] just as great prosperity if you moved it across the street to 60th Street, which was the site of the Plaisance Hotel, Ross said. “Putting it in a park is a cheap, skin-flinted, frugal, second-rate approach.”

De la Rosa rebutted, saying, “This is totally disrespectful to President Obama. He deserves it. If he wants it here, then it should be here.”