The former FBI Director spoke to students about the art of leadership in a politically divisive climate. 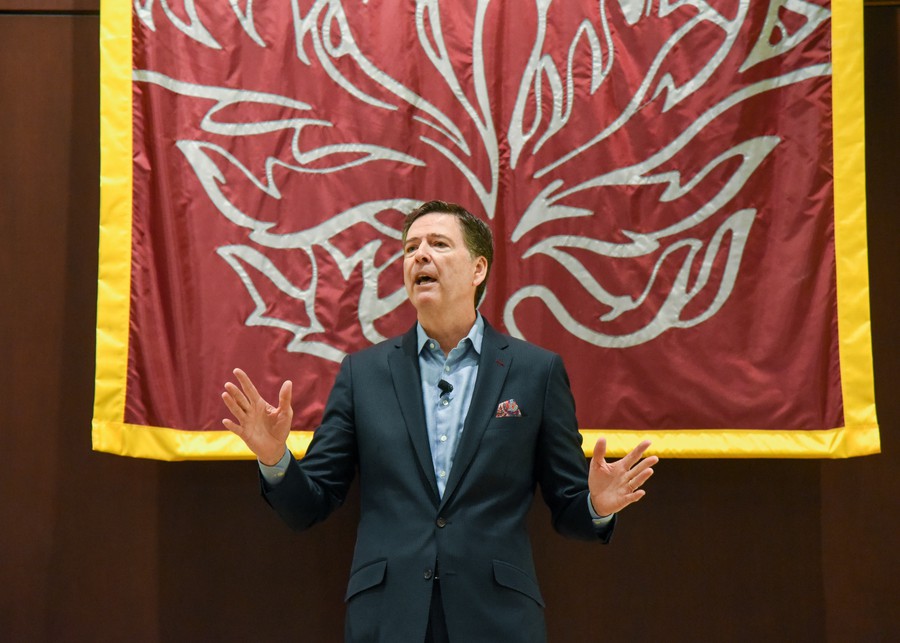 Comey was appointed by former President Barack Obama as the seventh FBI director in 2013. In 2017, President Donald Trump fired Comey amid criminal investigation into Russian interference in the 2016 presidential election.

Comey opened with his definition of ethical leadership: “To be a leader is to be both kind and tough, both confident and humble.”

According to Comey, the key to being both kind and tough is to “try to build an environment where people know that the standards are high and that they are loved.”

Reflecting on his interactions with different presidents, Comey said that President Barack Obama was the best leader he knew. “When I visited President Obama in the Oval Office, he would always sit in the soft chairs [instead of behind his desk]. He would open his posture...and be silent for five to 10 minutes while you spoke,” Comey told the audience.

Comey said that speaking with President Trump is an entirely opposite experience, referring to him as “deeply insecure.”

“I am in the Oval Office with the next president,” Comey said, “who only sat behind the desk. He almost never stops talking. If you tell him something that he might have overlooked, you have to shout it, over the desk, into a storm of words.”

Comey expressed his concerns regarding the disregard for truth in the Trump administration, calling truth “the touchstone of America.” He noted that previous Presidents George W. Bush and Barack Obama also “spoke falsely”—Bush claimed that there were weapons of mass destruction in Iraq and Obama said that people would be able to keep their doctors under the Affordable Care Act—but both were held accountable by the public.

“There’s a danger today that there’s so much lying going on, especially from our president, that we will become numb to the touchstone being washed away like a sandcastle at the beach,” he said.

Despite his concerns, Comey told the audience that he “sees good things happening” because of the Trump administration: “I think our country is being stress-tested now. And I actually believe our current president has illuminated things for us that we were taking for granted,” said Comey. “...I think he is accomplishing, without intending to, a shrinking of the presidency, which I think is closer to the design of the founders, and the energizing of the Congress and the courts that hasn’t happened in a couple of decades,” he said.

Regarding whether America is facing a constitutional crisis, Comey said, “I see the design working...It is a nerve-wracking stress, but I see it working.”

He argued that America had been “more screwed up” in the past, such as in the early 20th century, when millions of Americans and one-third of Congress joined the Ku Klux Klan.

Comey said that he is confident that America will recover from the Trump administration. “Our history, from my experience, is like a graph, y-axis graphs the progress against our values...with time on the x-axis, and overall it is an upward slope. But if you stare at it, it is a jagged line...with ups and downs.”

Comey concluded his speech by encouraging law students to participate in different leadership roles. “Law students are uniquely suited to become ethical leaders,” Comey said, “[because] this is a profession that is internalized with the notion that the rule of the law matters and the truth is a real thing.”