Safely Trick-or-Treating: University officials are enforcing multiple safety precautions this Halloween, including closing parts of 53rd Street after noon today and creating a crime-alert text system that can be used by students and community members in Hyde Park or Kenwood.

“[An Elephant Sitting Still] is premised upon the experiential and aesthetic power of long takes; the very nature of its lifeblood, its idea, necessitates its length.”

The 39th Annual Humanities Day challenged attendees to examine what it means to be living in an age of great technological and social upheaval.

Your weekly roundup of arts and culture, on and around campus. 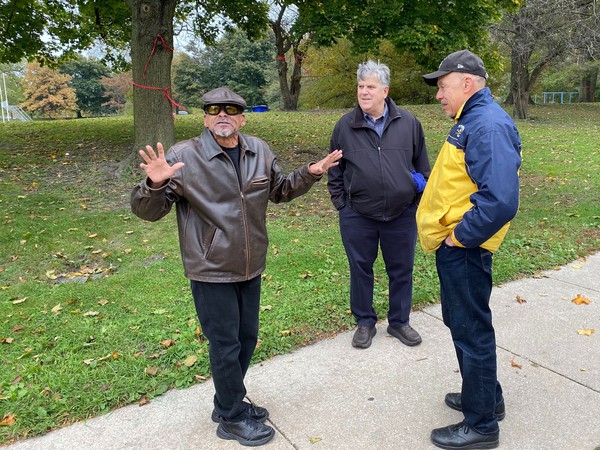 A counter-protester speaks to two PoP protesters. In the background, a tree slated for removal sports two red ribbons.

Protestors tied red ribbons around trees as part of a staged demonstration against tree removal being part of current construction plans for the Obama Presidential Center. The demonstration on Saturday was organized by community activists affiliated with Protect Our Parks, a group that recently appealed a lawsuit against the city and Chicago Park District.

Administrators faced criticism and questions last week during a “Community Conversation” which addressed the results of the Campus Climate Report. The length of the report—132 pages—and the timing of the event (at noon on a Monday), were among the concerns raised about how the report’s findings have been communicated to members of the University

Columnist Sam Joyce argues that the University's decision to demolish the University owned American Taxi Service Building was not inevitable, but rather the product of negligence, as a good renovation could have kept the historic structure alive.

Swim and dive dominate at their first meet of the season. Michael Kaydin explores how global recruiting has changed the dynamics of the Men's Soccer team. Volleyball sets impressive achievements with a successful season.

What makes sex good or bad, how to define it, and Western constructions of sexuality were among the topics discussed at a Night Owls lecture hosted in the University Church last Thursday. The talk featured philosophy professor Agnes Callard and Rebecca Kukla, professor of philosophy at Georgetown University.

Circumstantial Extensions: The College Admissions Office is extending the early application deadline to November 10 for university applicants affected by the Chicago Public Schools (CPS) strike. CPS students are not required to request permission for the extension.

Latin Honors: The University will begin awarding Latin Honors to graduating college students, according to a new policy published in an updated version of the Course Catalog. No announcement was made to students.

“Obstruction of juice taste?” That would be a PIT (we’ll be the first to admit, it’s not our finest pun). Be sure to check out this week’s crossword puzzle, “O-Ring.”