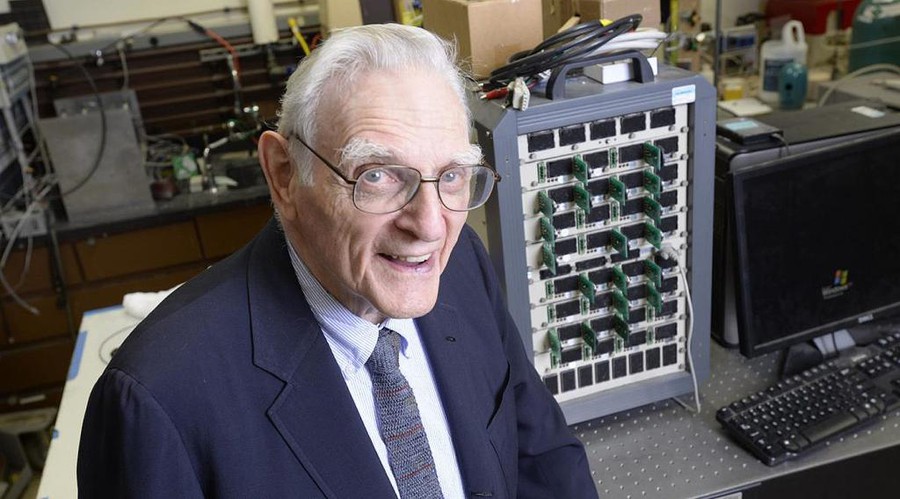 Courtesy of The University of Texas at Austin

By Emma Dyer   and Deepti Sailappan

John Goodenough (S.M. ’50, Ph.D. ’52) is one of this year’s Nobel laureates in chemistry, the Royal Swedish Academy of Sciences announced on Wednesday.

Goodenough, a professor of mechanical engineering and materials science at the University of Texas at Austin, shares the prize with M. Stanley Whittingham of Binghamton University in New York and Akira Yoshino of Meijo University in Japan.

The trio was recognized for creating the lithium-ion battery in the 1970s—which would, in turn, enable the development of electric cars, solar and wind energy storage, and portable electronics like smartphones and laptops.

Goodenough’s understanding of inorganic chemistry allowed him to recognize that using a different material for the battery’s positively-charged side, cobalt oxide, made a lithium-ion battery capable of generating twice as much power as the battery had previously been able to. Cobalt oxide is still used in the lithium-ion batteries found in smartphones and tablets today. 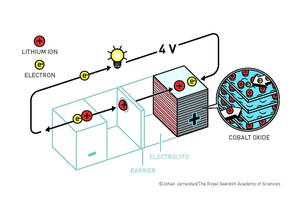 John Goodenough recognized that a lithium-ion battery's energy could be doubled with cobalt oxide at the battery's cathode.

At 97, Goodenough is the oldest-ever Nobel laureate. He remains active in research.

In some ways, Goodenough is used to scientific achievement at an advanced age. According to UChicago News, when he came to the University after serving as an Army meteorologist in World War II, then-UChicago professor (and Manhattan Project co-leader) John Simpson told him and other veteran students, “Don’t you know anyone who’s done anything important in physics has already done it by your age?”

Goodenough would go on to study under Nobel laureate Enrico Fermi. After finishing his UChicago studies, he worked at the Lincoln Laboratory at the Massachusetts Institute of Technology, where he contributed to the development of RAM (random-access memory) for the digital computer.

Impacted by the oil crisis of the 1970s, Goodenough became interested in developing alternative energy sources. The type of research he wished to perform was not eligible for government funding that the Lincoln Laboratory relied upon, leading Goodenough to become a professor of inorganic chemistry at Oxford University, according to the Royal Swedish Academy of Sciences’ press release.

In his quest for alternative energy sources, Goodenough found a way to solve the problem of having adequate storage for all the energy generated by renewable sources. Lithium-ion batteries can be used to store large amounts of energy efficiently from renewable sources such as solar panels and wind turbines. Goodenough’s new lithium-ion battery also set the stage for the wireless revolution, as the size of rechargeable batteries decreased while their effective energy output increased.

“I’ve learned to be open to surprises [and] not have preconceived ideas or close your mind from listening to what might work,” he told the University of Chicago Magazine in 2016.