Toro y Moi's recent show at the Riviera was almost too perfectly done to be entertaining. 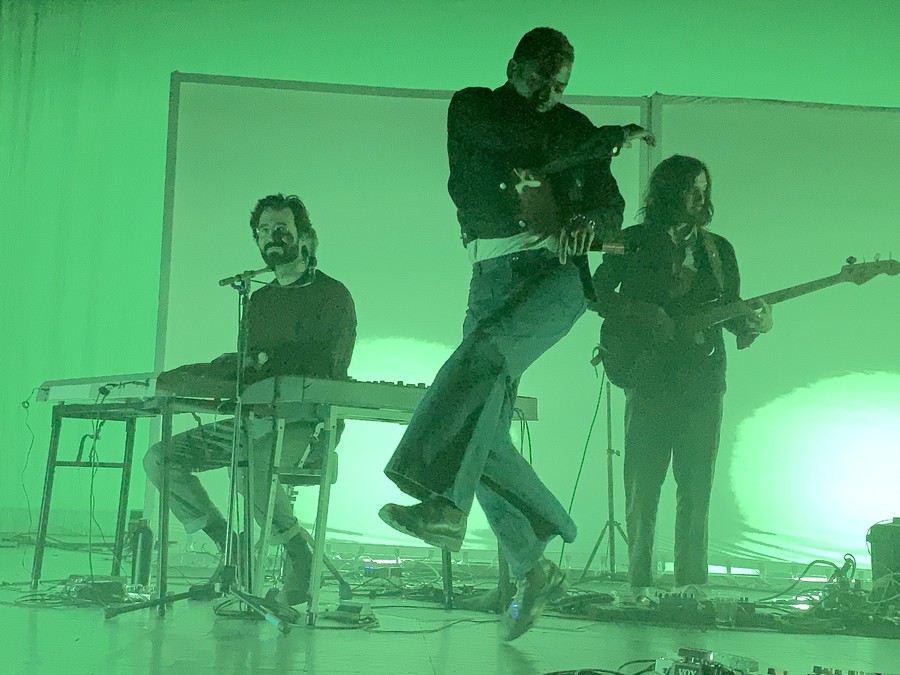 Toro y Moi played at Riviera Theater on the first of the month.

The epithet that my dad most often uses to describe the music I share with him is “pleasant-sounding.” Along with this usually come “it’s not bad” and “not really something I would seek out.” These descriptors have usually been anathema to me; was he just humoring me? Did it all just sound like background music to him? After attending a Toro y Moi concert at the Riviera, I’ve finally figured out exactly what my dad was getting at with the cryptic phrase, “pleasant sounding.”

Toro y Moi came to prominence in the early 2010s as a part of the emerging chillwave movement, among such peers as Neon Indian and Washed Out, who drew influence from electronic artists like Panda Bear, Ariel Pink, and Fennesz. Toro y Moi and his contemporaries created music that was characterized by its repetition, lo-fi production and heavy use of warm synths. Chillwave also incorporates the sounds of corporate and commercial music, which heavily influenced the Vaporwave movement that sprung out of it. Chillwave was a creation of the Internet—its all-inclusive gathering of influences only possible thanks to the infinite resources online—and so is emblematic of the Internet itself. The movement incorporates all of its various influences from all corners of the Internet and elsewhere into musical pieces that glow with the bright warmth of a CRT monitor.

In his newest album, Outer Peace, Toro y Moi’s Chaz Bear takes his well-established chillwave aesthetic to a new area; with stronger beats, fuller production, and more urgency than much of his previous work, Bear’s new album forays into dance music, without foregoing the trappings of chillwave. This is still the Toro y Moi we know, but not the exact same one that released Causers of This back in 2010. He’s matured, or at least changed, without sacrificing his quality or his identity.

However, despite the successes that Toro y Moi enjoys in his studio recordings, he does not seem to enjoy the same levels of success in creating a live act.

Last Friday, the classic French Renaissance Revival theatre was packed with as many 30- and 40-something couples as it could handle. Chaz Bear came onstage to great fanfare, along with three guys who look more like they should be in the backing band for Tame Impala. With a man on drums, a man on bass, and a man on keyboard/synths, Chaz himself provided vocals, as well as occasional synths or guitar. The band was set against a small backdrop, and the whole stage was illuminated by wash lights which covered the stage in flat blue, purple, or green. It was a great light setup: not overdone and very appropriate to chillwave. In that respect, Toro y Moi is leagues ahead of many other live acts. When he started the show, things were looking good: Chaz’s voice was great, the mixing sounded great, and everyone was putting in a tight performance overall. This continued for another hour or so.

The thing that makes Toro y Moi subpar live is the exact thing that makes him at least decent live: He sticks to his successes on the recorded album. I could not point out to you a single time in more than an hour of performance that Chaz Bear took a risk with his live set, unless you count audience interaction as a risk. Even then, he seemed to minimize his risks as much as he could there, too. It took a lot of effort to concentrate for more than an hour on the live set; Toro y Moi’s musical style lends itself to sameness, and this sameness amplifies itself over a long period of time during which the only thing one is supposed to focus on is music that is meant to be put in the background. In a word, it’s not hype music.

For the real Toro y Moi fan, I say go, go, go! Chaz Bear plays all the hits, he plays them very well and with a nice light show to go along with it. A fan could scarcely complain that the concert leaves out any of the same energy that goes into his albums. However, for the less devoted fans, I would say that there’s not much to miss in a live set that is so tight that very little enjoyment can seep out.