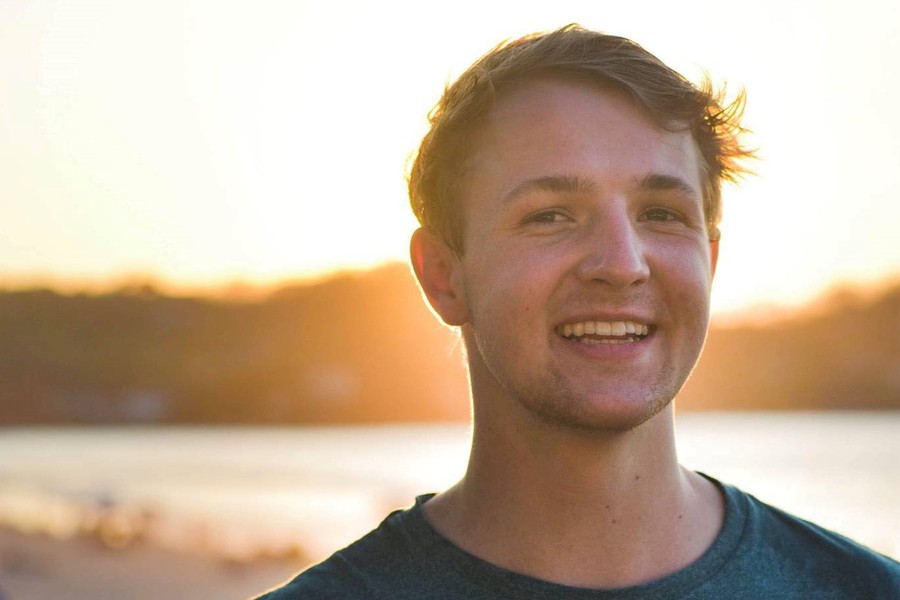 In November 2017, fourth-year student Angela Seeger, then a second-year, was sitting in the common room of Campus North, stressed over a reading she had not completed and internships she had not applied for. Seeger was in the middle of cranking out a research paper when another student, a fellow second-year, walked into the room wearing khakis, white shoes, and a buttoned shirt with a Penny board tucked under his arm. He approached Seeger. “Hey, do you mind if I play the piano?” he asked.

Secretly, Seeger did mind—she was preoccupied and feeling anxious—but she politely said, “Of course.” The second-year headed to the back of the room, where there were two fireplaces and a piano. “At this point, I’m preparing to leave the common space and head back to my room,” Seeger told The Maroon, remembering the exchange.

“But then, the most beautiful thing happens,” she said. “He plays softly and intently; his whole body becomes part of the music, if that makes sense. He sways with the notes and sends the vibrations he feels in his fingertips throughout the room. His music is the type of music that just warms you up. Listening to him play was like the feeling you get when you take a sip of a hot drink and it slides down your throat to your stomach and you can feel it, every step of the way.”

Stuart Buie, the second-year student playing Christmas music, reminded Seeger “how much joy there is in being next to a fireplace when it’s snowing outside.”

Buie was known for moving people with his music. Fourth-year Josh Press-Williams, one of Buie’s closest friends, recalled when he invited Buie to his home in Virginia and Buie played a Chopin scherzo in front of Press-Williams’s mother, who “freaked out” at Buie’s raw skill, according to Press-Williams.

“My mom’s been playing piano her whole life and she was like, ‘this kid is more talented than I could ever be,’” Press-Williams said. “He really enchanted my mom.”

Buie's favorites: Buie's friend Claudia Ruder shared a playlist that Buie had made for her. These were songs that he loved and wanted to enjoy with others, she said.

Buie started playing the piano when he was five years old, his mother Linda Buie told The Maroon. The youngest of three siblings, he watched his mother teach his older sisters piano and asked for lessons as well.

“It wasn’t work for him,” his mother said. “After school or after a baseball game, he would run upstairs and go to the piano and play…. He wouldn’t change out of his uniform or practice clothes.”

“Stuart knew how to play.... [His] teacher really brought out [in] him the idea of performing,” his father Gregg Buie said. “That this could be a real skill and real enjoyment for other people.”

Buie could switch fluently between a variety of genres, like ragtime, jazz, and classical music. His first recital song was the Pink Panther theme. Aside from playing the piano, Buie also participated in the school choir during elementary and middle school, which gave Buie the opportunity to perform at professional baseball games.

During high school, Buie performed at Carnegie Hall and the Vatican. His high school music program was considered one of the best programs in the state, Gregg Buie said.

Buie also loved sports. In middle school, his favorite sport was basketball, but he also took part in flag football and baseball. He took gymnastics, karate, and Tae Kwon Do at his local community center. In high school, Buie participated in wrestling, football, and cross-country teams.

He also developed an interest in skateboarding during high school. Buie built his own Penny board using components he purchased online, and brought the board with him to college, where he could frequently be spotted gliding down the street, ahead of the crowd.

Many of his friends noted his board as an iconic part of Stuart’s college routine. “There’s a lot of memories of me sitting outside of the [Epsilon] house as he’s coming,” Press-Williams said. “To get off [the Penny board] all the time, he would just let it go and then just run, so it’d be him almost falling over, running really fast as the Penny board goes flying in the other direction.”

Growing up, Buie participated in Christian extracurricular activities. In high school and at church, Buie joined worship band. The son of a guidance counselor and an ESL instructor, Buie would also help his dad and mom teach the youth groups during Sunday school. This exposure to teaching enabled Buie to additionally tutor other students in piano and mathematics.

Upon entering college, Buie intended to major in mathematics and minor in music, hoping to enter the record label industry.

Reflecting on Buie, friends who knew him repeatedly came back to the way he lit up a room.

“He was just really, genuinely, the nicest guy I’ve ever met,” Press-Williams said. The first time Press-Williams met Buie was during spring quarter of his first year after attending a party after finals. Despite having only met Buie once that night, he was surprised to receive a text from him the following day. “He was like, ‘Man, that was really fun. I hope you have a good summer.... I can’t wait to see you next year.’” Press-Williams said.

The following school year, Press-Williams and Buie hung out more often, marathoning TV shows like American Vandal, Band of Brothers, and The Pacific, and playing pool in Buie’s apartment basement.

Fourth-year Dylan Stafford, who was in Buie’s house first year, remembered Buie as “without question, one of the nicest people in the house—he just exuded brightness.”

Delia Sosa (A.B. ’19) instructed Buie in a course for University of Chicago Emergency Medical Services, an emergency medical service. “His smile and laughter were contagious,” Sosa said. “Having him in class brought a bit of sunshine to every week.”

Press-Williams also recalled how the elevators at Buie’s second-year apartment used to have a sign that stated it failed certification two years ago. “Whenever it was me and him in them, he used to jump up and down in them and the elevator would...go down, and I would be begging him to stop,” Press-Williams said and laughed. “He would just keep going.” When Buie rushed the Epsilon Club, a coeducational social organization, Press-Williams quickly followed.

“He was always laughing. He had this really goofy laugh,” Press-Williams said.

Fourth-year Clara de Castro, another close friend of Buie’s, met him during O-Week, when both of them lived at North. Castro described Buie as cheeky and someone who “looked at everything as a potential improvisation,” she said.

One of the funniest pranks Castro recalled Buie pulling on his friends was when he claimed he wrote a piece about them and proceeded to perform it on the piano. “He would just get really close and get really emotional about the fact he wrote a song for you,” Castro said. “And then he’d start playing [“A Thousand Miles”].... It was like a half-hour lead-up to this.”

During school breaks, Buie would send postcards to his friends and on their birthdays. “In perfect handwriting. No mistakes,” Castro said. Buie’s gifts to Castro were typically coupons for restaurants and shops they frequently visited. “It wasn’t about actually getting me a present. It was about like getting me little moments that we could share together.”

After two years at the University, Buie decided to switch from a math major to a music major, and pick up a math minor instead. While in college, Buie played piano for the Jazz Combo events run by the music department. During his free time, Buie additionally enjoyed going to a church located on 63rd Street to listen to gospel music for several hours.

Press-Williams recounted one incident in which he and Buie were on an Epsilon Club retreat, and a group of their fellow fraternity members were attempting to let a raccoon into the house they stayed at. “He got really stressed out and went downstairs and maybe like 20 minutes later I got too stressed out,” Press-Williams said. “I remember just coming downstairs and he...had his headphones on and I think he brought his keyboard...and he was just like playing piano to get himself to calm down.”

In his music classes, students noted his music prowess. Fourth-year Greer Baxter took jazz theory with Buie. Upon taking the class, Baxter soon realized that he was “the most talented piano player in the class.”

Jazz theory “was one of the most challenging classes at UChicago but Stuart made sure it would be one of my favorites,” Baxter said. “To make me feel better, he sweated the 10 weeks right along with me. He made me feel like we were in this together.”

Upon learning about Buie’s death, Baxter wrote to The Maroon:

“We laughed and stressed and took breaks to listen to each other’s original songs. He made magic when he played and had a soul of a true artist. At the end of the quarter, having bonded over Thelonious Monk, we promised we would write songs together. We never did. I wish we had. I am better for having known Stuart, for his tutelage and friendship. I can still hear him playing his brilliant compositions. And I will keep those exquisite notes close. It is so easy to take time and each other for granted. I will miss you, Stuart. Although there will forever be a silent key—the one we lost this week, your beauty and your music will always fill our hearts and will play on.”

The University’s Student Counseling Services are located at 5555 South Woodlawn Avenue. Students may schedule appointments by calling (773) 702–9800 or walking in during business hours (Mondays through Fridays, 8:30 a.m. to 5 p.m.).