The Ides of March Come to Theater West

University Theater kicked off its mainstage season this weekend with Shakespeare's "Julius Ceasar." 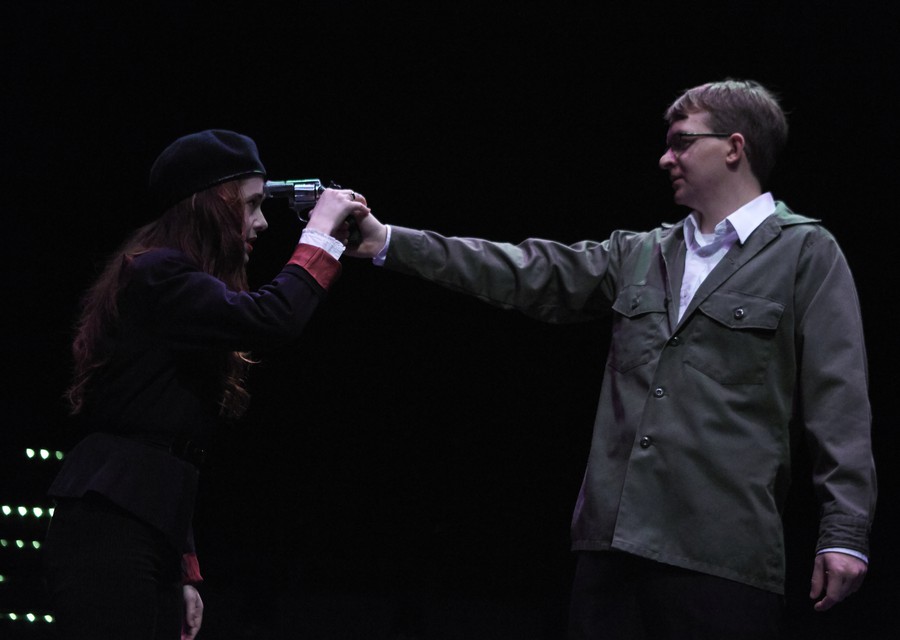 Ambition should be made of sterner stuff.

The mainstage season officially kicked off this weekend with the University Theater (UT)’s production of Julius Caesar, staged in Theater West at the Logan Center. Directed by Liam Flanigan, Julius Caesar is the Bard’s classic history tragedy that chronicles Brutus’s moral dilemma as he joins the conspiracy to kill the title character, and his subsequent fall from grace.

With its political angle, Julius Caesar has often been ripe material for modern productions. The most famous of these was Orson Welles’s acclaimed 1937 Mercury Theatre production, which connected the story to rising fascism in Italy and Germany. More notoriously, New York’s Public Theater staged a Shakespeare in the Park production in 2017 in which Caesar closely resembled a certain orange-skinned toupee-wearing figure. The University Theater’s production set the story in a vaguely contemporary setting—all actors wore modern dress, and a massive poster of Caesar suggesting Big Brother propaganda towered over the theater, courtesy of set designer Melaina Leung, a third-year in the College.

Unfortunately, little else in this production suggests its connections to the present day. Such a course seems to have been almost completely avoided, with no clear decision made on the location beyond a vague “Rome.” In fact, besides some strong lighting choices from designer Lucas Asher, the production’s environment as a whole felt off. The ensemble was sorely underused as so-called “crowds”—in one particularly awkward case, it stood silently during the opening scene while Cassius and Brutus exchanged words, only speaking when Shakespeare’s text called for it. Transitions brought the pace of the show to a grinding halt, and the choice of transition music seemed to have few connections to the content of the scenes. Sound design was underutilized, with the entire show feeling oddly silent bar the occasional gunshot and a knock at the door.

The most distracting aspect of this production was its handling of gender. The practice this production seems to have decided on was inverting the gender of the characters within the text: Brutus, Caesar, and Antony were presented as women, and Calpurnia was presented as a man. Such a change has potential, as it offers a completely different dynamic from Shakespeare’s original story. And this is a 400-year-old play with a predominantly male cast—why follow the casting conventions of the time?

However, I had an issue with how superficially this casting was executed. Only pronouns were altered, and the occasional “brother” was changed to “sister.” Otherwise, the rest of the text was intact, and the consequences of this change ignored. References like “Brutus is an honorable man” or even misogynist comments about Calpurnia were left untouched, which made the gender change of the characters feel at best redundant, at worst poorly considered. The former Latin student in me couldn’t help but notice the gendered Roman names are also unchanged: Julius would have become “Julia,” Brutus would be “Bruta,” Calpurnia would be “Calpurnius.” I know I’m nitpicking, but it shows an insufficient amount of dramaturgical thought went into the changes to the text, which can pull the audience out of the scenes when they notice the inconsistencies. It would have made more sense to either simply leave the text intact while casting whoever they wanted for the parts, or fully embrace the changes and produce something verging on adaptation while still keeping the base story intact. In-between comes off as lazy.

All this said, this production showcased strong performances, especially from the newcomers to the theater community. First-year Sanjana Rao had strong stage presence as the Soothsayer offering Caesar warnings of her impending death, and the same can be said of Amy Lu’s dual roles of Portia and Octavius Caesar. As Julius Caesar, Emily de Vegvar commanded the space and delivered the right amount of pride and hubris necessary for the character. The Citizens (Zakir Jamal, Dante Manocchio, Vernon Li, and Don Harmon) also made strong impressions, particularly in the tragically comedic death of Cinna the Poet at the end of Act III. I also have to commend this production for the coherence of the dialogue—Elizabethan text is the hardest to crack for modern actors, yet all the beats and even the humor of the story came through. Particularly for a sixth-week show, that is an impressive accomplishment.

As a whole this production left a lot to be desired, but it marks a strong start to the mainstage season. It was also encouraging to see the talent onstage from actors who have not previously participated in University Theater productions—there is untapped potential beyond the usual suspects of UT, and I look forward to seeing performances from these players in the future.