Do Kurds Have Any Friends Other Than the Mountains?

Higher-ups at the University of Chicago need to back the Kurds and speak out against the Turkish invasion of Northern Syria. 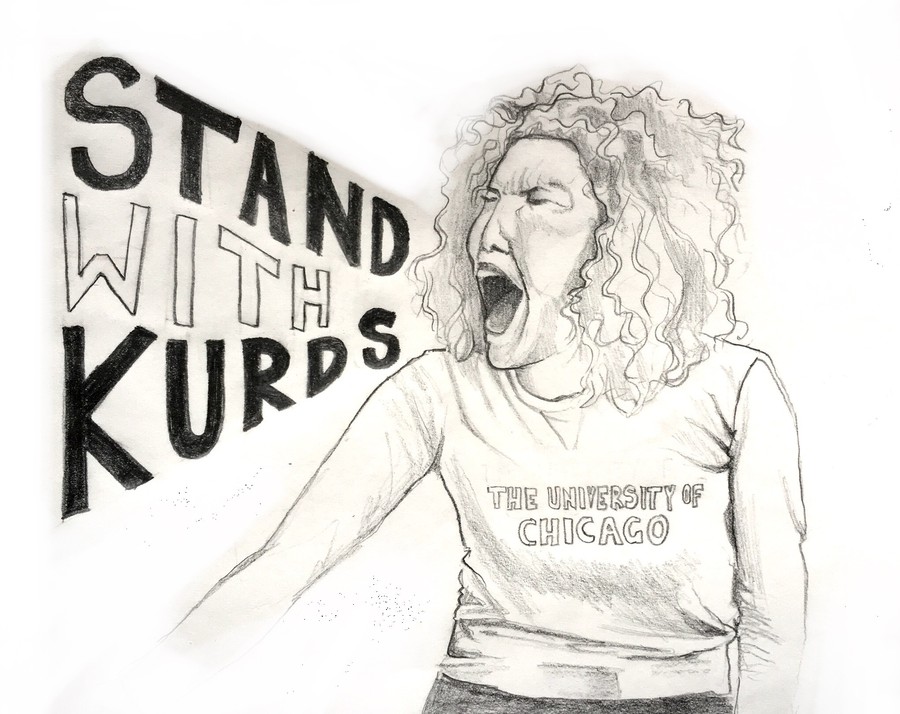 I am writing to the UChicago community because as members of one of the leading universities in the country, we can make a change by supporting efforts to stop the Turkish invasion of northern Syria and the ensuing ethnic cleansing and war crimes. As a global institution, we have a responsibility to do something in the face of these brutal, unprovoked military occupations that make the world a more dangerous place for all. There are many actions the University can take to help improve the situation, or at least prevent further deterioration, such as suspending ties with the state institutions of Turkey, organizing panels on the topic, raising awareness, and making sure that the truth is spoken, since silence makes us complicit in the crimes being committed.

After a phone talk with President Erdoğan of Turkey on October 7, President Trump greenlit the long-planned invasion of northern Syria by Turkey and its proxy forces, an amalgamation of jihadists of all stripes. Trump’s decision has been labeled by both Democrats and Republicans as an abandonment, betrayal, and backstabbing of the Kurds. The area, known as Rojava in Kurdish, which was until recently one of the most peaceful areas of Syria, turned into a warzone. Hundreds of civilians have died, and hundreds of thousands of people, mostly Kurds, have been forced to evacuate their homes or face terrible deaths during Turkish invasion.

The U.S. had originally wanted to work with Turkey to fight against ISIS, but did not find a willing partner in Turkey, as the country’s leadership didn’t see Islamic jihadism as that grave of a threat and was willing to turn a blind eye both towards foreign fighters entering Syria to fight against the Kurds and the Syrian regime that Turkey considered an enemy. Furthermore, Turkish leadership ultimately didn’t see ISIS and the foreign fighters flooding into Syria (40,000+ from 110+ countries) through the Turkish border as a threat. Indeed, Brett McGurk, former presidential envoy for the coalition to fight ISIS, said that despite ISIS’s presence on Turkish borders, Turkey said it “couldn’t do it [close the border].” Members of ISIS were, in fact, treated as “soft” Turkish allies against the Kurds and the Assad regime.

Why did Turkish officials not feel threatened by ISIS’s presence on the country’s borders? Why did Turkey keep the borders open to the transfer of weapons and influx of jihadists, including 40,000 foreign fighters from 110 countries from all over the world? And why did it refuse to close the border area despite repeated requests from the U.S., but when the Kurdish-led Syrian Democratic Forces (SDF) beat ISIS and took the areas along the Turkish border under its control, Turkey closed all of its borders at once and built the third-longest border wall in the world? This is no coincidence: The SDF never posed a credible threat to Turkey. American troops stationed on the border, witnessing the developments on the ground firsthand, attest to that fact, as do other U.S. government officials.

These conditions paved the way for the U.S.–Kurdish partnership against ISIS. Kurds were secular, well-organized, tolerant, and brave, and didn’t shy away from fighting ISIS and sacrificing so many lives, around 11,000, to protect themselves and provide security for the world at large. The SDF kept the pressure on ISIS and prevented them from carrying out attacks in the West, but now that they are under Turkish attack, they won’t be able to do that effectively. What led the United States to so readily partner with the Kurds? Turkey’s unwillingness to treat jihadists as a real danger and portrayal of the Kurds as worse “terrorists” than even ISIS enslavers, rapists, and murderers, coupled with the Kurds’ strong track record in fighting against ISIS, played a crucial role in the formation of the partnership between the Kurdish-led SDF and the U.S., as has been stated repeatedly by former and current U.S. government officials.

In a place like the Middle East, where religious and ethnic tensions run high, radicalism of all kinds finds fertile ground to operate. Still, even there, the Kurds had built a pluralist democratic administration that put women and ecology at its center. Even a quick skim of the Social Contract of Kurdish Rojava will demonstrate this: it is inclusive of all groups in the region; there is a 40 percent gender quota, guaranteeing fair representation of both sexes; it is secular; and it guarantees protection of all local languages and representation of minorities. The Kurds implemented a cochair system in which there needed to be a woman as cochair for all positions of power, guaranteeing equal power between sexes. They formed all-female police forces and put domestic abuse cases under their jurisdiction. They banned child marriages and polygamy. In short, they aspired to build an egalitarian, democratic, inclusive, and just society. The institutions they built in the midst of one of the most barbaric civil wars in history testify to this.

Importantly, the Kurdish experiment with self-rule in Syria, after many decades of oppression, dispossession, and statelessness, was perceived as a threat by Turkey. From all I can observe, it appears that Turkey wanted to suffocate this experiment lest it set an example for Turkey’s own restive Kurds, who have been reeling under Erdoğan’s heavy-handed oppression. Indeed, in Turkey, Kurdish politicians are jailed, and those who speak Kurdish in western Turkish cities are lynched and killed on a regular basis. Opposing the war has been criminalized too. Turkey deems any manifestation of Kurdish autonomy as an existential threat.

If the U.S. were to pull its full weight and honor its statement that it will not accept its partners being destroyed and invaded by Turkey and their allied forces, the bloodshed would be stopped. If not that, then a no-fly zone over northern Syria under U.S. auspices would protect the people of Rojava from bombing by Turkish jets, as Turkish air attacks account for most of the casualties and damage. This no-fly zone is one of the main demands of the SDF leadership. The U.S. has a responsibility to provide these protections to the Syrian Kurds. It is never too late to mend. Kurds should have more than just mountains as their friends.

The University can also take a stance against the Turkish invasion. UChicago administrators can review if they have any financial investments in Turkish companies that are supportive of or are involved in the invasion of northern Syria. And if they do have such ties, they should walk out of them. Moreover, using the highly regarded Center for Middle Eastern Studies, the University should initiate a program to provide scholarships to bright students from northern Syria. It can task the Pozen Center for Human Rights with investigating the gross human rights violations and war crimes, which we see daily on the news, taking place in northern Syria. It can initiate a Kurdish language program or major option. These are just some of the actions that the University can and should take, given the challenges Syrian Kurds currently face.

What we cannot do is to remain silent. We owe it to ourselves to speak up for those whose voices are being drowned out and whose rights to life are being brutally taken away. Remember, as Martin Luther King once said, injustice anywhere is a threat to justice everywhere in the world. Let’s do all we can to stop this injustice.

Xelef Botan has an M.A. from the Center for Middle Eastern Studies at UChicago.