Organizers with the CBA Coalition held a Teach-in to involve residents in the CBA process. 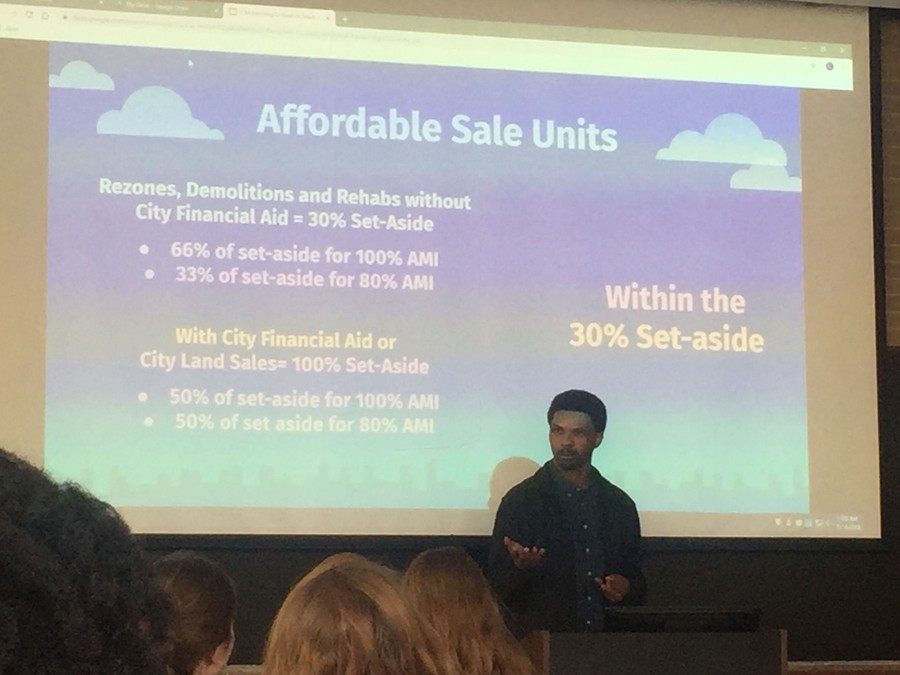 Community organizers with the Obama Community Benefits Agreement (CBA) Coalition held a teach-in on Saturday morning at the School of Social Service Administration to address the stymied progress of the CBA ordinance through City Council and the need for further activism. Members of Southside Together Organizing for Power (STOP) and UChicago Against Displacement presented the proposed legislation and discussed the importance of passing a CBA ordinance to residents of the South Side.

The CBA Coalition and the ordinance it advocates for are at the center of the fight over the Obama Presidential Center (OPC), slated to be built in Jackson Park, and over how it will affect the South Side community. The ordinance aims to prevent current residents from being displaced by rising property values by mandating affordable housing and ensuring more broadly that community members will benefit from the massive economic investment that will accompany the OPC’s construction.

The current CBA ordinance was introduced by Aldermen Jeanette Taylor (20th Ward) and Leslie Hairston (Fifth Ward) in July. Taylor and Hairston’s wards cover the neighborhoods of Kenwood, Hyde Park, and Woodlawn, which will be primarily affected by the presence of the OPC. However, progress towards passing the legislation has stalled. Activists at the teach-in expressed frustration at City Council’s reluctance to pass the bill.

“We’re in these meetings with the Department of Housing,” STOP housing organizer Devondrick Jeffers said. “Their idea is to have something concrete and implemented by January. Our thing is that we have something concrete, it was introduced in July, what’s the hold-up? We can pass a CBA and still have this conversation.”

The central objective of the CBA legislation proposed by Hairston and Taylor, which the Coalition supports, is to mandate that 30 percent of any new developments within a two-mile radius of the OPC be set aside as affordable housing, affordability in this case defined as 30 percent or less of monthly household income. Within that, some new rental units would be set aside for tenants with income levels between 30 percent and 80 percent of the average median income for the area.

In addition to affordable housing requirements, the CBA ordinance would create an anti-displacement task force made up of community members and stakeholders from the Obama Foundation, CBA Coalition, and the University of Chicago. The task force would oversee a community trust fund authorized to grant funds for home repairs, property tax relief, and other programs to support small businesses and workforce development.

The final important component of the CBA is the “first right to offer,” which would require landlords selling a building to notify a list of “qualified purchasers” determined by the Housing Commissioner first. This group would include tenants associations, community trusts, and land developers with a proven commitment to affordable housing; if one of these groups were to make an offer for the building that included a guarantee to maintain 30 percent of units in the building as affordable housing, the owner would be required to consider the offer.

“This is about putting ownership in the community’s hands,” Jeffers said, adding that the CBA would also encourage the city to sell vacant land to community residents. “If a working family wants to buy a city-owned lot, we’d rather you than somebody trying to make a zillion dollars.”

Residents who attended the teach-in expressed concern that not enough community members, especially in Woodlawn, were fully aware of and involved in advocacy for the CBA. The Coalition has encountered resistance to its activism from groups worried that placing too many restrictions on development would discourage potential South Side investors.

“When we say affordable housing people go up in arms thinking that we’re trying to recreate the projects,” Jeffers said. “That’s not the case. We’re looking out for working families and folks who are making $30,000, who are struggling and paying more than 30 percent of their income just to have a place to lay their heads.”