Protestors? "Terrorists." Carrie Lam? "A Sinner for A Thousand Years."

At a University symposium, panelists debated criticisms of both the pro-democracy movement and Hong Kong government’s actions.

By Alexis Florence   and Brad Subramaniam 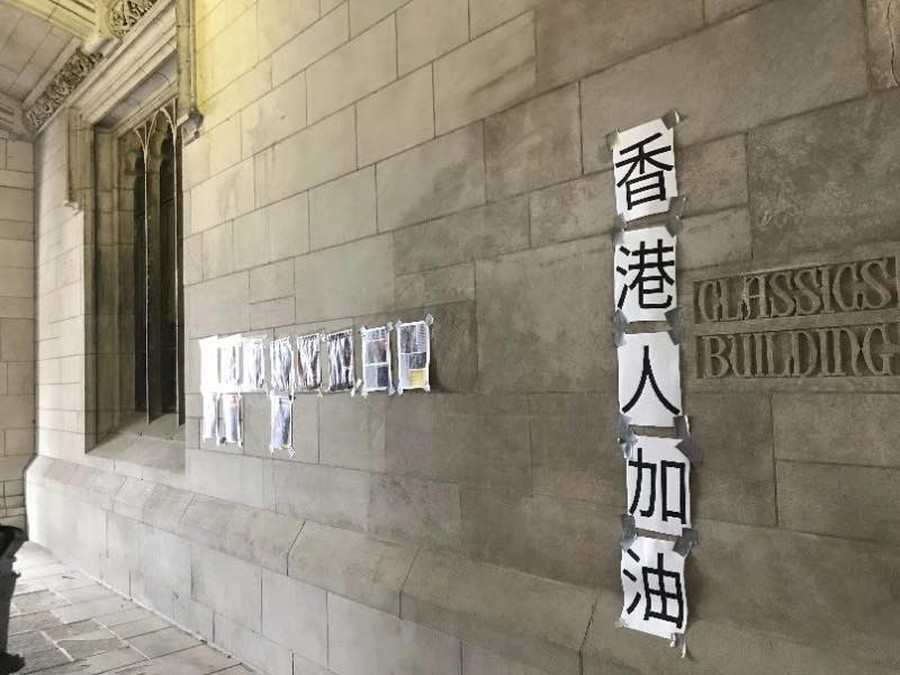 An expression of pro-Hong Kong sentiment, "Keep it up, Hong Kong" posted outside Classics, was captured and discussed in a group message of Chinese and Chinese-American parents.

Protesters and government officials both faced criticism at a UChicago symposium aimed at increasing dialogue around the ongoing Hong Kong protests Monday, one speaker calling Mainland China "complete lawlessness" and another claiming student protesters are building an "arsenal" on university grounds.

The discussion was moderated by UChicago Political Science professor, Dali Yang, and organized by undergraduate students from Hong Kong in partnership with the Center for East Asian Studies. Panelists analyzed past events which led to the current turmoil in the city, debated criticisms of both the pro-democracy movement and Hong Kong government’s actions, and discussed police brutality.

The recent student protests come after the death of Hong Kong student Alex Chow on November 4, who fell off of a car park building during a police operation to clear the area. The death, which sparked protests at Hong Kong University of Science and Technology, quickly spread to other universities across the region such as Hong Kong Polytechnic University and The University of Hong Kong.

Over 1,000 arrests were made at the universities on Tuesday and 235 were injured after clashes between students, some of whom threw rocks and homemade petrol bombs, and police officers, who used rubber bullets, water cannons, and tear gas.

The uptick in violence at Hong Kong’s universities resulted in UChicago’s cancellation  of its economics study abroad program on Monday, which was slated to begin during winter quarter at the University of Hong Kong.

The panel speakers expressed their concern for the ongoing violence from both the local police as well as protesters.

Victoria Hui, associate professor of political science at the University of Notre Dame, said, “We are seeing a police-provoked escalation of violence. Once we have violence, it is easy to create a social distance because people feel like they have to defend themselves. Social distance then contributes to the process of dehumanization.”

Henry Ho, pro-Beijing founder of the One Country Two Systems Youth Forum think tank and former political assistant at Hong Kong’s Development Bureau, said that the protests needed to be more controlled in order to prevent further violence and that some students protesters ought to be viewed as terrorists.

“The university students [along] with some extremely violent protesters have turned that campus into an arsenal. I think it's fair to say that they are becoming terrorists,” Ho said.

Ho argued that heightened police aggression was started by incitement and humiliation from protesters and the media.

“One of the reasons why police [have] become so violent is because at the beginning when the police were relatively restrained, they were called dogs and there was a lot of humiliation by the protesters and the internet. The media has really fueled this movement through hatred and through spreading fear and lies,” Ho said.

Emily Lau, a former chair of the Democratic Party of Hong Kong, argued that the protesters’ fears were justified concerning actions of the Communist Party in China. Protesters are right to fear extradition, Lau said, because in mainland China the law “is whatever the Communist Party says,” Lau said.

In particular, Lau blamed the government’s response on Hong Kong’s chief executive, Carrie Lam. “She allowed the whole thing to explode, and disappeared for weeks,” Lau said. “She is a sinner for a thousand years.”

Hui continued Lau’s criticisms of the chief executive, adding that Lam was acting under pressure from Beijing. “A higher force is essentially ordering the police to do whatever necessary to quell the protests,” Hui said. She added that before Lam withdrew the extradition bill, she met with officials from Beijing. “She is just a puppet,” Hui said.

Chu Kong Adrian Iu, a graduate student at UChicago, said he was pleased with the content discussed at the panel, but wished the presenters would have delved deeper into the future of Hong Kong and what will result from the protests.

Another UChicago student, who attended secondary school in Hong Kong and has family in the region, said that although he does not condone the violence, he understands why the protestors are lashing out. The student wished to remain anonymous.

“I think the [violence comes from] an issue that’s been going on for decades, of a sense of lost identity, not having a feeling of control over your future, and then when you throw further uncertainty into the mix about the extradition bill, and not having any goodwill with mainland China, it seems like an almost inevitable conclusion to me that this was going to happen,” the student said.

Several members of Global Solidarity with Hong Kong - Chicago were present and echoed a similar sentiment regarding the source of violence. “With all the police brutality that’s been going on the past few months, I feel like Hong Kong really has no choice but to do something to escalate their voice to be heard by the city, to the officials, to the world, and to whoever would listen to them,” one member, who wished to remain anonymous, said.

Another member added that protests have been incited by violence from pro-Beijing mobs and companies. “These protesters aren’t just wrecking stores aimlessly.”

Despite the ongoing turmoil in the city, students still expressed their desire to return.

“Hong Kong is still home for me,” said the anonymous student.