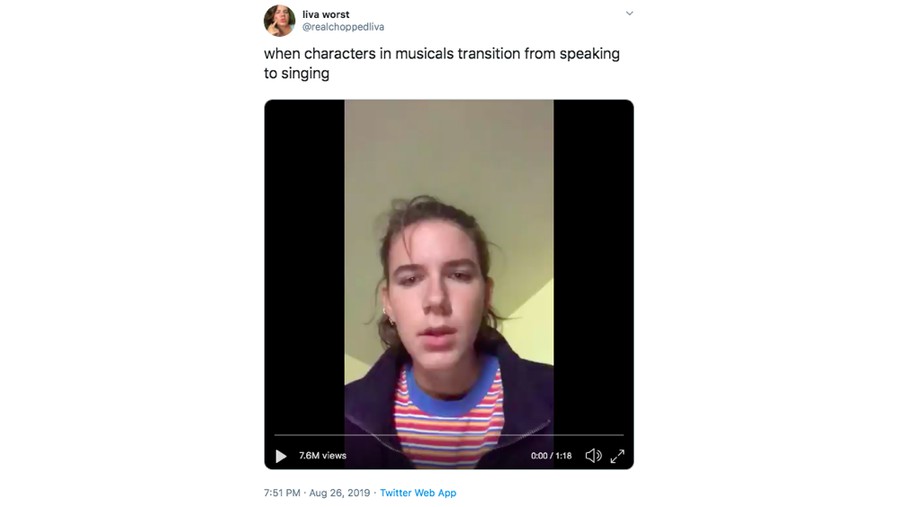 On August 26, second-year Liva Pierce posted a video on Twitter spoofing musical theater. Within days, her social media following exceeded 30,000 people on Twitter and on other platforms like YouTube and TikTok; the video now counts more than 7 million views.

The video is a sendup of the awkward transitions between spoken dialogue and songs, depicting musicals in pitch-perfect Broadway style. “Hey, you listen here, mister: I’m not gonna be an orphan. I’m gonna get adopted by a rich man!” she sang. At another point: “I’m not just a witch. I’m a witch with HPV, and I’m proud of it.”

“This is my religion now 🙏,” D’Arcy Carden, an actor on NBC’s The Good Place, commented. “Who’s the person who said girls aren’t funny I just wanna talk,” another Twitter user wrote.

The Maroon spoke with Pierce about her newfound celebrity.

The video that catapulted her to stardom had humble beginnings. “I had noticed some other people who I follow, like comedians, posting these straight-to-camera videos, and I had broken my elbow earlier in the summer, so I was home a lot,” Pierce said.

“That idea came to me since I did a lot of musical theater growing up as a kid, and I like that transition since it’s awkward and forced.”

Pierce’s experience with musical theater and comedy, which inspired her video, continued even after she graduated from high school. “I actually took a gap year before coming here. So, I worked at two theaters here in Chicago, I lived in Chicago, and I took some theater classes at Second City,” Pierce said.

Upon arriving at UChicago, Pierce knew she had to join Off-Off Campus, UChicago’s improvisational-theater and -comedy troupe. As a second-year member, she is now involved with sketch production for the troupe’s performances at The Revival, a theater in Hyde Park.

“I did improv during my gap year and high school, so I really wanted to put time into a group like Off-Off,” Pierce said.

Where does Pierce find the inspiration to keep generating viral hits?

“Because I do a lot of improv I have a lot of stupid random jokes about fantasy creatures, random things, and also I’m gay so I really like talking about that,” she said.

“When I go about my day, and I see something that appears contrived or off or forced, it’ll stay stuck in my head. Now usually, if I have those thoughts, I’ll write them down, and from there, I’ll think about where it could apply.”

Her other tweets on these subjects have garnered a large amount of attention as well, including a video making fun of people who insist on sharing their unpopular opinions, which has almost 47,000 likes, and a tweet that reads, “stop saying lesbians dress bad! we brought layering into the world and we can take it out of it 🔪🔪 have fun wearing one shirt at a time,” which has over 23,000 likes.

“I feel like I’m always filtering things through where it could work, whether it be sketch or tweets or something,” Pierce said.

Pierce is also motivated to produce the content she wants to see in the comedic landscape, which includes more content from LGBTQ+ comedians.

“I don’t see a lot of gay comedians who are doing comedy but not letting that be everything about them,” she said. “Like, it’s either really tokenized or it’s very one-dimensional because they only get to play a sidekick or something. I just want there to be more fully realized, funny gay people, and I think there are starting to be more. A lot of those people are the people who inspire me the most.”

Pierce said that she’s inspired by comedians ranging from Charles Rogers and Sarah Violet Bliss, a writing duo that created the show Search Party on TBS, to Amy Poehler, for her success in bringing more female voices into comedy. “She produced really cool shows by women and about women,” she said.

Pierce’s musical video saw widespread attention from people in the entertainment industry and received replies from celebrities including comedian Thomas Sanders, actor Michael Urie, and director Ava DuVernay. As of November 24, it has 7.6 million views, 89,600 retweets, and 339,300 likes.

With her 65,000–strong Twitter following, Pierce has found new opportunities in professional comedy. “It’s been really weird. It doesn’t seem real. I’ve been on the train and had someone recognize me, and what has been cool is that I’ve gotten offers to do stand-up shows and perform at places around the city,” she said.

Pierce hopes to focus more on performance, using her newfound audience as a boost to get her act off the ground. “Moving forward, after fall quarter, I am going to try to use that momentum to try to do more [performances] like stand-up, which is newer [to me], so I’ll have to practice.”