The town hall began with a presentation on the climate survey results by the Office of Sexual Misconduct Prevention, which was followed by a brief Q&A session. 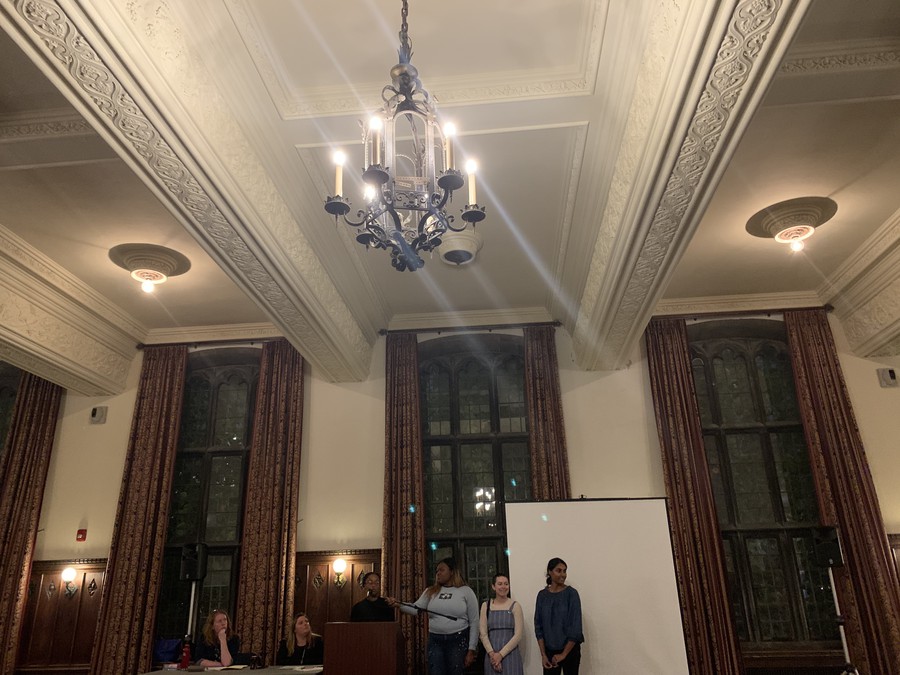 At an event hosted by Student Government (SG), University administrators rejected a call to recognize fraternities, stated that most sexual assaults occur in the first six weeks of a student’s first year, and answered student questions about sexual misconduct at UChicago.

SG hosted “Town Hall: Sexual Misconduct” on Wednesday, October 30, as a forum for students to discuss the results of the recent Campus Climate Survey with administrators. Administrators released the results of the climate survey in a campus-wide email on October 15. According to the survey’s findings, over 40 percent of UChicago students have experienced some form of sexual harassment.

The Title IX office previously held a meeting on the climate survey’s results on October 21 at 12:30 p.m. However, SG’s Executive Slate expressed their displeasure over the results of that meeting in a statement, urging the University to recognize fraternities. The Executive Slate also said the SG town hall would be more accessible to students, since it took place in the evening and food was provided.

The town hall began with a presentation on the climate survey results by the Office of Sexual Misconduct Prevention, which was followed by a brief Q&A session. The event concluded with a short talk by a representative from Porchlight Counseling Services, a Chicago organization that provides free counseling for college students who have experienced sexual assault.

During the Q&A session, students asked administrators about the University’s response to the results of the survey. Below is a selection of student questions and responses from administrators.

Question: According to the Campus Climate Survey, most assaults happen in College Housing. With the new two-year housing requirement, what will the administration do to ensure student safety?

Bridget Collier: We’ve done a lot of programming in that space—specific training with residence hall staff. I think we’re at a point where we need to evaluate what further efforts we can do in that environment.

Question: There seems to be an emphasis on post-incident resources for students. Why is this so and what are your plans for prevention?

Bridget Collier: What we know is that the majority of incidents happen in a student’s first year. In fact, we know that the first six weeks of school are particularly vulnerable for students. We have tried several evidence-based initiatives and clearly we have not changed that number significantly. I think we need to establish more partnerships and receive more federal funding to look into issues of sexual violence to find real solutions.

Question: Is the University taking any steps to address the regulation of fraternities? If not, what does the University administration have to gain from refusing to formally recognize fraternities, and what structural barriers are preventing them from doing so?

Bridget Collier: As it relates to sexual misconduct, I do not see evidence that recognizing fraternities would reduce incidents or sexual assault. The residence halls are our number-one space [where assaults occur], and these are regulated spaces. Individuals who are in Greek life are still students at the University, so they still participate in our training efforts trying to prevent these issues and are part of our disciplinary process. A student who experienced any form of sexual misconduct has the ability to file a complaint against another student, whether that student is in a fraternity or not.

By contrast, the Executive Slate emphasized that despite the University’s decision to not recognize fraternities, they would work toward the full recognition of Greek organizations.

Under current University sexual harassment policy, misconduct that occurs off campus, such as at an off-campus party, is still subject to investigation for University adjudication. Despite changes to nationwide Title IX policy, the University’s policy is not slated to change in the near future.