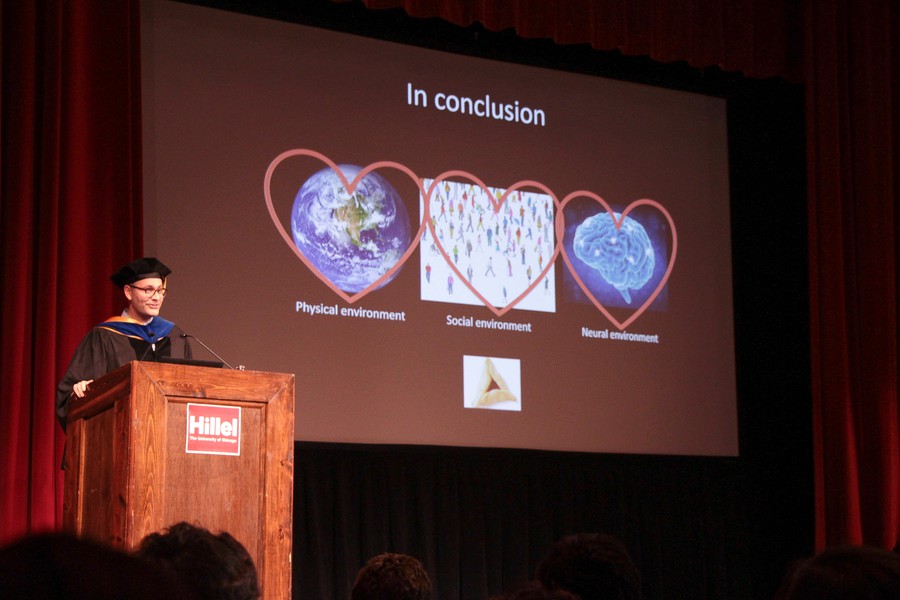 With arguments ranging from the latke’s complicity in environmental destruction to the ecofeminist significance of the hamantash cookie, UChicago professors debated the relative merits of two staples of Jewish cuisine in Hillel’s 73rd Annual Latke-Hamantash Debate.

The theme of this year’s debate was environmentalism, addressing the question, “Which [of the two foods] is better for our biosphere?”

The satirical debate has amused audiences since 1946, featuring several Nobel laureates, MacArthur Grant fellows, and UChicago presidents as past speakers.

Every year, one side argues for the superiority of latkes (potato pancakes fried in oil that are typically enjoyed during Hanukkah) while the other side advocates for the hamantash (a triangular wheat-flour cookie with a fruit, poppy seed, or other sweet or savory filling, eaten to celebrate the spring holiday of Purim). No one has ever won the debate.

Hillel Executive Director and Rabbi Anna Levin Rosen was first to address a packed Mandel Hall. She delivered opening remarks, touching on the deep significance that environmental values have to Judaism. “The commitment to preserve is part of our story…. We have been reading the same book for over 2,000 years,” she said, to roars and applause from the audience.

Rabbi Rosen also stressed the importance of conservation in the Jewish tradition. “If you offer us a new testament, we’ll say ‘thank you for offering, but we already have a testament. Why bother getting a new one?’”

Professor of philosophy Benjamin Callard, who served as moderator, opened by invoking former President Ronald Reagan, who said in 1966 that “a tree is a tree. How many more do you need to look at?” Callard proceeded to speculate about how philosophers George Berkeley, Jean Paul Sartre, and Socrates might react to Reagan’s sentiment.

Callard then invited each of the three debaters—all dressed in doctoral gowns—up to the podium to present their arguments.

First to speak was professor of psychology Marc Berman, representing Team Hamantasch. Berman reminded the audience that potato pancakes are fried in oil to commemorate the central miracle of Hanukkah, in which a quantity of oil that should have lasted for only one day instead lasted for eight.

But Berman’s tone became cautionary as he switched to an ominous photo of an oil refinery captioned “the latke celebrates oil.” He warned the audience that “this stuff has downstream consequences,” and went on to explain how another Hanukkah tradition, the children’s game of dreidel, instills capitalistic values that prioritize profit over environmental well-being.

Next was professor of environmental and urban studies Raymond Lodato, representing Team Latke. In accordance with debate convention, Lodato served as the token gentile onstage.

Lodato lauded the potato’s versatility in the kitchen and in nature. “Potatoes are so adaptable that they even consent to live in Idaho,” he said. “They get along with everyone. They are actually the Mr. Rogers of foodstuffs.”

Lodato pointed out that wars have been started over salt, an essential ingredient of latkes, while hamantashen have no similar claim to fame. He did acknowledge, however, that hamantashen can be fine, “if you like overcast skies, or watching your laptop load files.”

The last of the debaters was professor Jessica Kirzane, who lectures on Yiddish in the Department of Germanic Studies. While her role onstage was the impartial “swing debater,” her speech was decidedly anti-Latke.

Kirzane pointed out that the word “hamantash” is also a Yiddish euphemism for a woman’s vulva. Her goal, she explained, was “not to scandalize this esteemed audience with a Yiddish vulgarism,” but instead “to place the hamantash in an ecofeminist context,” suggesting that “we celebrate female anatomy and the power of women as a way of resisting the exploitative dominance between men and nature.”

Following the debate, attendees were given a chance to sample the subjects of the debate for themselves.

When asked whether Hillel would continue the debates, Rabbi Rosen told The Maroon, smiling, “I think that Hillel will continue these debates for another two or three thousand years.”