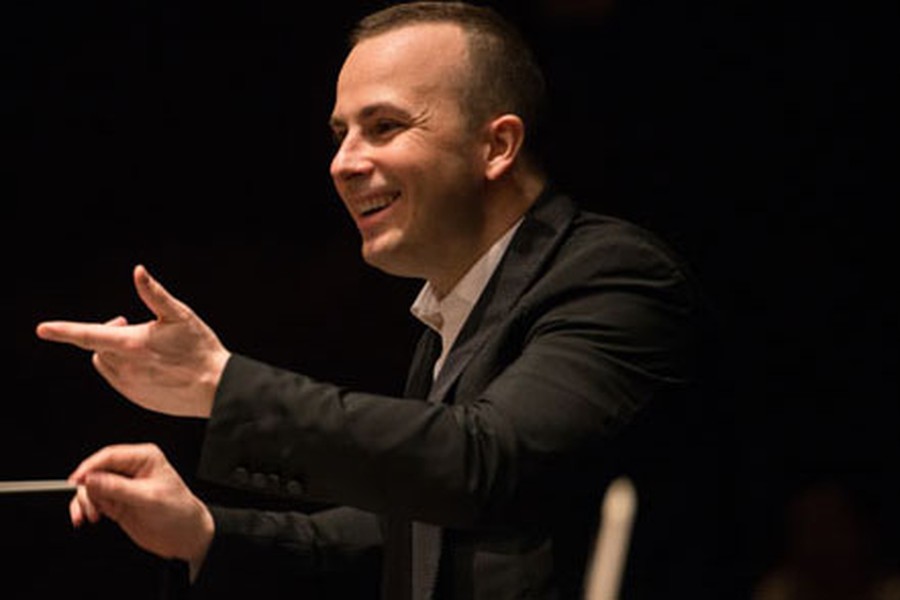 Yannick Nézet-Séguin, his longtime orchestra the Orchestre Métropolitain (OM) de Montréal, and Joyce DiDonato earned over seven minutes of standing ovation on November 19 at the Chicago Symphony Center. They deserved every second of it.

Nézet-Séguin, who became the music director of the Metropolitan Opera last year, has already proven himself to be one of the most capable Mozart conductors of his generation, and his rendition of the Overture from La clemenza di Tito was further proof of the fact. Presenting the introduction of the overture, the maestro created a sound like a sharply-defined wave, its firm intention crashing onto the audience before yielding to a more playful, seafoam-esque, section of the piece. The chemistry between conductor and orchestra was inimitable—the orchestra played as if it were simply an extension of Nézet-Séguin’s hand.

Indeed, Nézet-Séguin and the orchestra have a storied history with one another, beginning when Nézet-Séguin was only 25 years old. Having been the principal conductor of the OM for 19 years, the orchestra recently extended his contract for life—a very rare occurrence, especially for such a young conductor.

Nézet-Séguin has also had a longtime performing relationship with the soloist of the evening: the renowned American mezzo-soprano Joyce DiDonato. Last year, the maestro and DiDonato recorded Tito with the Chamber Orchestra of Europe as part of Nézet-Séguin’s Mozart opera cycle for Deutsche Grammophon, to much critical acclaim. Fresh from a performance with the Chicago Symphony Orchestra (CSO) at Carnegie Hall the previous week, DiDonato was absolutely dazzling. Dressed in a stunning red gown, her “Parto, parto” enraptured the audience from the first note. Her voice, like a razor-sharp saber, cut through the hall with incredible grace in the first section of the aria, before transforming into an incredibly soulful *passaggio*, and then returning to sparkling coloratura for the finale. Performing beside DiDonato, the OM’s principal clarinet Simon Aldrich was spectacular, navigating his incredibly technical accompaniment with grace and apparent ease.

DiDonato’s next aria, “Non più di fiori,” was equally impressive. However, her best singing and acting of the evening was undoubtedly her rendition of “Voi che sapete.” It brought the opera house to the concert hall, and made Nézet-Séguin the Susannah to her Cherubino as he leaned on the podium and drew countless laughs from the opera in what was truly a delight to behold.

After proving their mastery of Mozart, the orchestra dove into Bruckner. The Austrian composer has a storied history in Chicago; largely seen as his American home for the better part of the 20th century, two of the CSO’s past music directors, Georg Solti and Daniel Barenboim, have been some of the greatest proponents of Bruckner’s gargantuan music. Nézet-Séguin and the OM have their own tradition of Bruckner, having just released their Bruckner cycle this year for ATMA Classique to wide critical acclaim. The maestro chose Chicago as the city for the OM’s U.S. debut on purpose, hoping to blend their tradition of Bruckner with Orchestra Hall’s.

They certainly made quite the impression. Indeed, the initial ovation lasted over three minutes. However, things started off shakily because the OM employs the Austrian seating arrangement, in which the horns and trumpets are seated on opposite sides of the hall, allowing them to each have their own independent sound. Usually, this works beautifully. However, this time, the horns and trumpets seemed out of tune, and the principal cornet seemed to have a little bit of trouble with the opening articulation. Despite this, the maestro managed to right the ship, as the strings swooped in shortly thereafter with excellent, traditionally timed German tremolo to make up for any earlier discrepancy.

Forceful and deliberate, the OM’s sound from the outset was monumental, yet at the same time incredibly emotional and human. Due to the sheer volume of his symphonies, Bruckner is often misunderstood as having written grandiose music for cathedrals. However, his music is far more emotional, religiously introspective, and deeply contemplative in a way that many contemporary orchestras miss. The maestro did not miss, not even by an inch. The interpretation was not overly dark. Though some believe that to be an inherent part of the symphony, it most certainly does not have to be. Nezét-Séguin’s performance was truly romantic, and the strings—the celli in particular— performed with such human emotion that quite a few eyes began to tear in the audience before the symphony ended. Chicago was very lucky to have the chance to hear it.