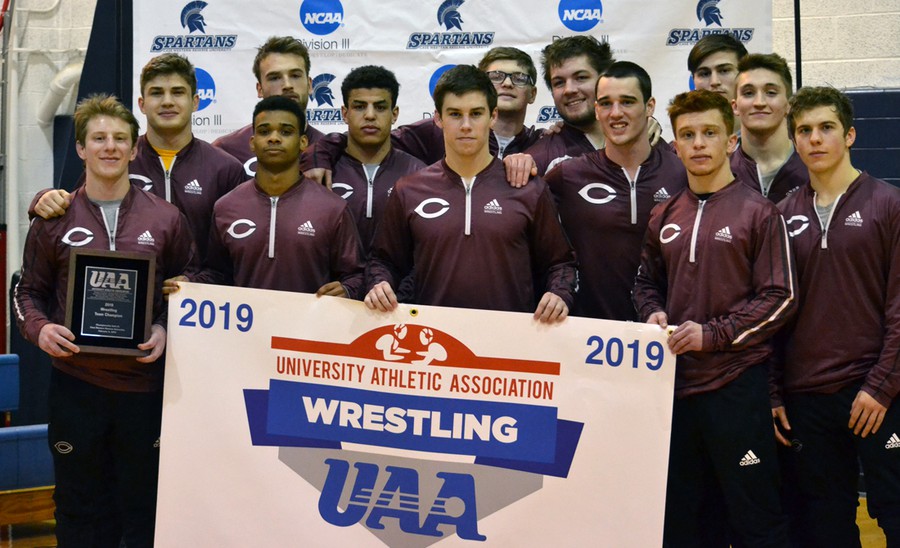 In a dominant display, the No. 24 UChicago wrestling team left no doubt as to their prowess on Saturday, cruising past NYU and Case Western Reserve University en route to the 17th UAA championship in program history. Winning 17 of 20 matches on the weekend, the Maroons landed seven wrestlers on the All-UAA squad and defended their UAA title in convincing fashion.

Carrying momentum from a 39–18 tune-up against Augustana on February 1, the Maroons picked up right where they left off. In the opener against NYU, Chicago captured nine of 10 matches in a long morning for the Violets, taking a commanding 22–0 lead and never looking back. Third-year Nick Carola (197 pounds) delivered the lone pin of the morning, while fellow third-year Kahlan Lee-Lermer, second-year Ben Sarasin, and fourth-year Louis DeMarco all won by major decision.

After narrowly advancing by NYU, the Spartans of Case Western Reserve earned the right to square off against the visiting Maroons for the UAA crown. The afternoon brought more of the same, with Chicago dismantling the Spartans by a score of 34–6, successfully defending their place at the top of the conference. Winning eight of 10 matches, the Maroons were led by pins from third-years Carola and Kyle Peisker, while second-years Sarasin and Jason Crary each delivered technical fall wins.

Asked about the meaning of back-to-back conference titles, Mulkerin attributed the success to his fellow upperclassmen. “I think the difference these last two years has been having experienced upperclassmen,” he said. “We’ve had to rely on freshman and sophomores in the past, but this year we’ve had a lot of senior leadership in the room to guide our talented underclassmen. I think we’ll have a lot more titles in the future with the core team mentality that we’ve really solidified this year, and a lot of that comes just from having big group of seniors for the first time.” Looking ahead to the NCAA tournament, he added, “For the postseason, it really will come down to peaking when it counts. We’ve all been wrestling well lately, and I think that’s a good indicator going forward. Lots of guys will have an opportunity to make it nationals this year—it’ll all come down to putting everything we’ve worked on into practice on the mat.”

While they are sure to celebrate the weekend’s hardware, the Maroons will enjoy nearly two weeks of recovery ahead of the postseason. In a season that has been dotted with injuries, the rest period will allow the team to return to full strength before looking to add to the trophy case. While still awaiting their location assignment, Chicago will kick off their NCAA Regional at 9 a.m. on Friday, February 22.