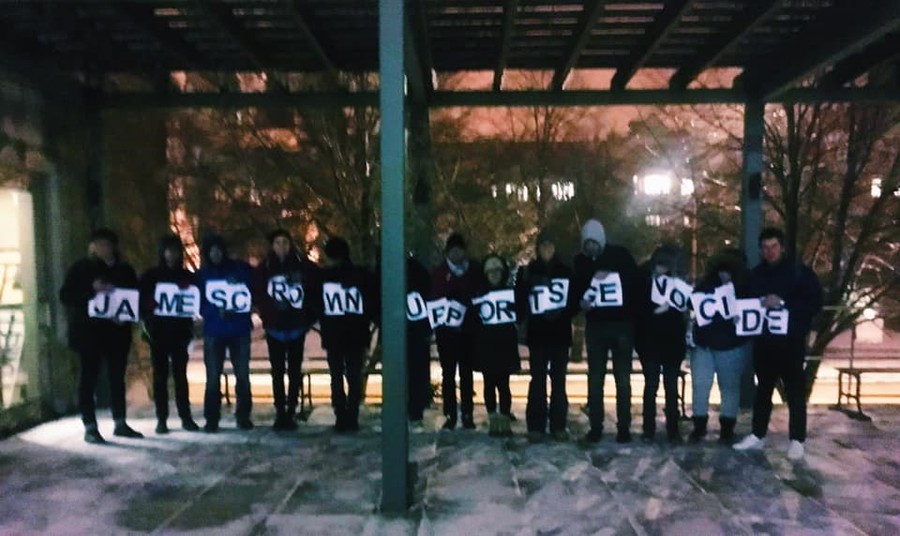 Protestor Julia Attie, a third-year student in the College and member of UCSA, told The Maroon that the students organized the protest because Crown is the lead director of the board and major shareholder of General Dynamics Corporation, the sixth-largest defense contractor in the world. General Dynamics has sold billions of dollars’ worth of weapons to the Saudi-led coalition to attack Yemen.

Protestors cited an August 2018 airstrike that killed 44 children as a reason for the demonstration. A piece of a bomb manufactured by General Dynamics was found near the site of the airstrike.

According to Attie, the students chose to protest during the Alper-Crown broomball match due to Crown’s anticipated appearance. “We really wanted to take this opportunity because Crown rarely appears on campus and this is his first public appearance at UChicago since the tragedy that happened last August,” she said.

The protest included chants like “you can lie, you can hide, you support genocide,” and “make it loud, make it clear, war criminals aren’t welcomed here.”

“It is really frustrating that no one seems to pay attention to what is going on,” said fourth-year and UChicago Socialists member Everette Pelzman.

Attie told The Maroon that the protestors intended to deliver a message to Crown. “I think he should feel shame for what he did in Yemen,” said Attie.

Pelzman echoed similar sentiments, saying, “I came here to protest because I want Crown to know that he has blood on his hands.”

Crown seemed to engage in watching the game and did not react much to the protest.

The protestors said they hope that the University administration will address Crown’s complicity in the war in Yemen, because of his deep ties to the University as a longtime trustee. “Just because someone donated a lot of money to the school does not mean we will blindly celebrate their legacy,” Attie said. When asked about what action the administration should take, Pelzman called for the removal of Crown from the Board.

Minutes after the protest began, the dean-on-call approached the protestors with concerns about disrupting the game. “The dean-on-call said that he’d hate to see UCPD getting involved,” said Attie, “but as far as we are concerned, we are not breaking any campus regulations.”

Several of the protestors told The Maroon they planned to attend a teach-in by professor Shireen Al-Adeimi on the war in Yemen, and stressed their hope that the event will raise awareness on campus about Yemen’s humanitarian crisis. The event occurred on Friday.

A previous version of this article stated that Andrew Alper, chairman of the Board of Trustees, was also at the match. Although Alper House was playing, Andrew Alper did not attend.