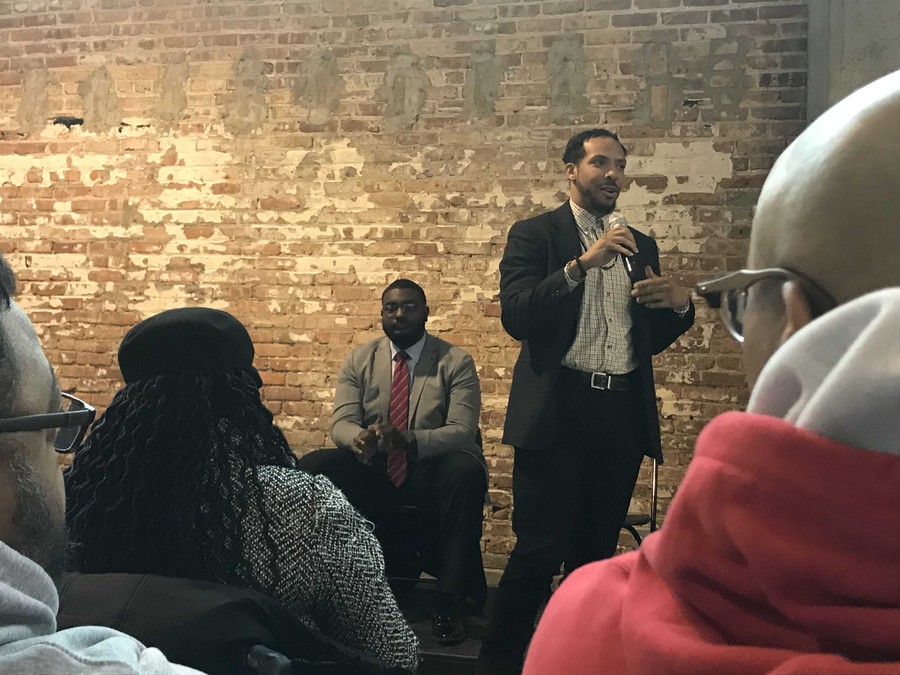 20th ward Democratic committeeman Kevin Bailey introduces himself at a candidate forum at the Experimental Station on Feb. 16

Seven of the nine aldermanic candidates who are still in the 20th Ward race appeared in an unusually contentious forum at the Experimental Station last Saturday, February 16. The forum was hosted by The TRiiBE, GoodKids MadCity (GKMC), and the South Side Weekly newspaper.

Moderators Tiffany Walden, co-founder and editor-in-chief of The TRiiBE, a digital media outlet that shares stories specific to the Black residents of Chicago, and Assata Lewis, member of GKMC, asked “hot seat” questions, as the moderators called them, specific to each candidate about their pasts or views that might worry voters. Many of these focused on candidates’ past involvement with local institutions that have seen a downturn in public opinion over the past few years. For example, Jennifer Maddox, a Chicago Police Department (CPD) officer, had to answer a question about whether she would be loyal to the CPD or community members in a hypothetical Laquan McDonald–like situation.

“I would have to go with what is right,” said Maddox in response. She went on to explain how she teaches kids their rights in police situations in her after-school programs and how, as an officer, she speaks up when situations are not handled correctly. When asked if there was a case where she had spoken up for the community, Maddox said she does so on a daily basis but did not provide specifics.

Moderators asked activist Anthony Driver about his past work in the Chicago Mayor’s Office of Public Engagement under Rahm Emanuel. He responded that “in order to know how to break systems, you need to know how they operate.”

Former Chicago Public Schools (CPS) teacher Nicole Johnson was asked about her connections to big donors, many of whom also donated to Emanuel, and how Black residents of the ward could trust her given these connections. She called the question an “egregious” attempt to link her to Emanuel. The question also said that donors to Johnson’s campaign also donated to the campaigns of Fourth Ward Alderman Ed Burke, Republican gubernatorial candidate Bruce Rauner, and the University of Chicago. Johnson defended her relationship with these donors, saying she had acquired them during her professional life before running for office.

Community organizer Jeanette Taylor also defended the donations she has received  from workers’ unions like the Chicago Teachers’ Union and the Chicago Federation of Labor, saying she wouldn’t apologize for their support and asserting that these unions supported workers’ rights. She also made a point of confirming she has received no money from developers or the University of Chicago.

Maya Hodari, a development director at the Chicago Housing Authority, while explaining her position as an independent outsider in the race during her introduction, implicitly called out petition challenges against her from opponents Johnson and 20th Ward Democratic committeeman Kevin Bailey. Hodari also touted her endorsements from the Chicago Tribune and the Chicago Sun-Times newspapers.

In his introduction, Bailey challenged his opponents to point to the impact they have made on the community.

“I’ve actually had a lot of experience battling gentrification and making sure that eminent domain is actually applied in a proper fashion, something that I don’t think any of my colleagues up here have done,” he said.

Bailey left the forum early for another forum without having told the moderators before the forum, and was not present for the line of “hot seat” questioning or questions from the audience.

One question asked candidates about their thoughts on CPS monitoring students’ social media profiles for gang activity. Lawyer Quandra Speights said she supported CPD’s gang database, which other candidates had denounced as a tool for targeting people of color. This answer prompted a verbal confrontation from a man in the front row. The two continued to argue as moderators asked Maddox the same question and finished when Walden asked the man to settle down.

Many candidates agreed on a variety of issues. Multiple candidates said they would work to improve and expand CPS’s Safe Passage program to ensure students get to school safely, in the wake of school closings on the South Side that have created longer commutes for students. Many also said they would impose checks on charter schools—Taylor proposed a moratorium on expansion, and Hodari suggested requiring the elimination of neighborhood preference, calling out the UChicago Laboratory Schools in the process.

Speights advocated for free education for low-income residents in the area, and Bailey advocated for greater involvement in existing local schools.

All candidates also asserted that they supported a community benefits agreement (CBA) that would protect current residents of the neighborhoods surrounding the incoming Obama Presidential Center from gentrification in the area, which might cause displacement. Moderators asked Hodari about her past reluctance to a CBA. Hodari affirmed her support for the agreement and clarified that she wanted to ensure community members were involved in the process.

Hodari said earlier in the forum that, unlike the other candidates, she did not consider rent control “a magic pill” for the ward’s housing issues.

Candidates also put pressure on the University to be a “better neighbor” to the surrounding communities.

Some emphasized UChicago’s role as an economic engine in the community. Hodari and Johnson discussed how business incubators like the Polsky Center could do more to benefit the surrounding area. Johnson proposed an annual grant competition for local business ideas. Driver suggested that the University should be included in the proposed CBA and called for more local hires on campus. At the moment, the University reports that about 3,000 staff members out of about 24,000 live in the surrounding areas.