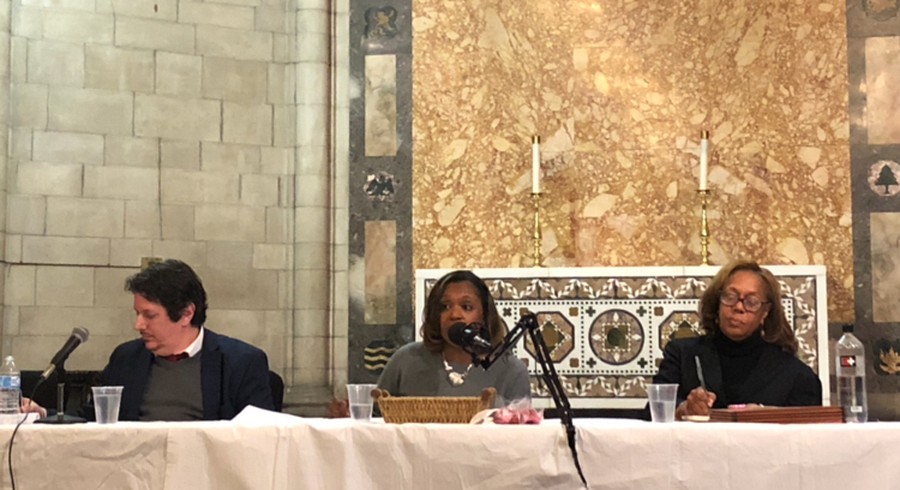 The candidates included Fifth Ward incumbent Leslie Hairston and her two challengers: Gabriel Piemonte, former editor of the Hyde Park Herald, and community organizer William Calloway. Ebony Lucas, Fourth Ward candidate and real estate lawyer, was also present, but incumbent Sophia King was absent due to a prior commitment. Lucas is the only candidate challenging King, who is running for re-election.

Lucas consequently partook in less political sparring than the other candidates. In contrast, Piemonte and Calloway frequently framed their policies and comments around Hairston’s actions.

In response to questions about pension debt, the candidates largely agreed that regressive taxes such as the bag tax and vehicle fees, which take a higher percentage of earnings from people with lower incomes, are not the solution. Lucas spoke about developing vacant lots to create shops and generate alternative streams of income, while Hairston referenced the plans to construct the South Suburban Airport as a financial “anchor for the South Side.”

Candidates also agreed on the need for Tax Increment Funding (TIF) reform. City officials designate certain areas as TIF tax districts with the intent of encouraging investment in underfunded areas. However, the TIF program has been criticized for sectioning off tax funds to only be used in a few areas when other geographical and policy areas need funding.

An audience member claimed that Hairston has misallocated funds. He asked, “Why can’t our money stay in our ward?”—referring specifically to the lack of food resources in South Shore. Later in the evening, Calloway argued in a similar vein that the Fifth Ward—which spans most of campus and extends southeast—is divided. He claimed that all its resources go to Hyde Park, and he subsequently described the South Shore neighborhood as isolated and “starving to death.”

“Don’t isolate us because we might be from a certain ethnicity or social class in South Shore,” he said, addressing Hairston.

There was debate around the lack of food resources on 71st Street: Hairston said that she was closing a deal on a South Shore grocery store on Wednesday, and cited the impending creation of a restaurant, movie theater, and bowling alley. Piemonte argued that a movie theater would not provide the healthy food or opportunities that young people need.

Lucas likewise highlighted the necessity of educating schools and their students on healthy food options, in order to create demand for healthy local restaurants.

On housing, candidates agreed on the need to reform Chicago’s building code, which they see as too strict, limiting the ability to build tiny homes and making it difficult to rehabilitate existing greystones.

Piemonte argued that “affordable housing should be looked at contextually,” in light of failing schools. He highlighted the viability of housing vouchers but stated that an “aggressive education campaign” is needed for landlords to stop treating those who use housing voucher like “second-class citizens.”

When asked about the community benefits agreement (CBA), Calloway was emphatically in favor.

“A CBA is the most needed and required thing when it comes to [the Obama Center],” he said.

Hairston agreed that there is a need for a viable stability plan, which she claimed to have already commissioned. She added that she had already created an office for employment, and claimed that “a CBA works best when the government is not involved” and when community groups work directly with developers. Hairston has not supported a CBA so far in her time in office.

“We have to respect the people who developed it together,” he said. “I don’t think you can say ‘I did that.’”

The candidates were asked how many terms they would impose on themselves in order to accomplish their goals. Hairston stated that “the voters decide what the limit is.” Both Piemonte and Lucas stated that they would not serve more than three terms, reasoning that if they didn’t achieve their goals in 12 years, then it was not meant to be.

Calloway’s answer was emphatic: “I vow to term limit myself to two terms,” he said, asserting that long term limits lead to complacency and corruption. He said that he planned to prepare a successor to run for election and carry on his plans.