Jeff Flake Talks Immigration and Kavanaugh at the IOP 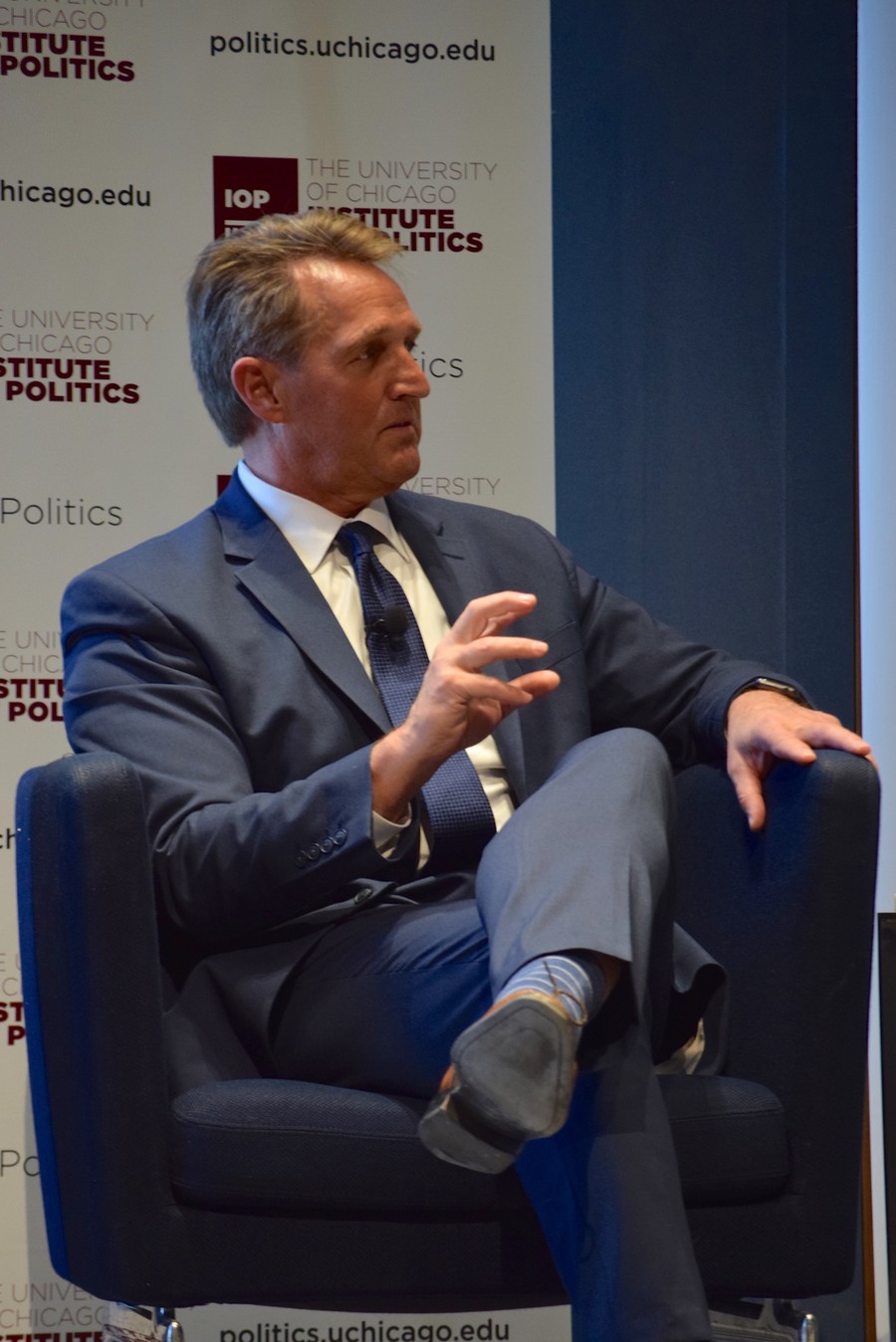 Former Senator Jeff Flake (R-AZ) sat down with Institute of Politics (IOP) Director David Axelrod on Friday to discuss his criticisms of the Trump administration.

He touched on his role during Brett Kavanaugh’s Supreme Court confirmation hearing, and why he chose not to seek reelection.

Flake was Arizona’s junior senator from 2013 to 2019, following his time in the House of Representatives from 2001 to 2013. He made headlines in 2017 when he indirectly criticized President Donald J. Trump during a Senate speech in which he announced his retirement, and again in 2018 when he called for an FBI investigation into the allegations of sexual misconduct against then–Supreme Court Justice nominee Brett Kavanaugh.

At the IOP event, Flake expressed dismay at the recent shift in his party’s ideology. When asked by Axelrod, “Do you think [Trump is] a conservative?” Flake said no, and added that he feared that “conservatism is becoming defined as being whether you support the President or not.”

Flake, a sponsor of the bipartisan Gang of Eight immigration reform bill, criticized Trump’s decision to build a border wall. Citing his experience as a Senator from a border state, Flake said, “This need for a wall, as the President described it, never made sense.” However, he said there has to be comprehensive immigration reform, citing the mounting problem of illegal immigrants, and expressed his distaste for Trump’s political strategies, saying, “The politics of populism is just not a governing philosophy. And it just doesn’t last very long.”

In an interview with *The Maroon*, Flake further elaborated on his political ideology, allying himself with conservative economic policy and highlighting immigration and trade as his main disagreements with Trump.

“I’m more aligned with Teddy Roosevelt,” Flake said. “You know, you show patriotism by standing for principles and the Constitution, not necessarily how much you support a particular President or his policies. Particularly when he’s from your party.”

“I thought [Ford’s testimony] was compelling,” Flake said. “I thought it was. But then I thought [Kavanaugh’s] was as well. I thought he acted like somebody who felt that he was unjustly accused.”

Flake admitted that he had—and still has—his reservations about Kavanaugh, saying, “Anybody who expresses such certainty that they know who was telling the complete truth, I just never had that certainty. Still don’t.”

He went on to say, “Some of the answers he gave [during his hearing], I thought that wasn’t a good example of what a judge should be. But if you weigh that against his time as a federal judge…for 10 years, you could not get one of his colleagues, including Merrick Garland…to say one contrary thing about his time on the D.C. Circuit.”

Responding to a question from Axelrod about how being confronted in an elevator by two women who were sexual assault survivors shaped his decision to hold up Kavanaugh’s nomination, Flake joked, “I take the stairs a lot more now.”

However, Flake then pointed out that he disapproved of the President’s dismissing the two women as “paid protesters,” and said that the women’s words “struck a chord” with him.

During a Q&A session, Flake addressed a student’s question about why he chose not to seek a second term in the Senate.

“I knew, given my read of the electorate in Arizona, that I would have to adopt some of the policies that the President has adopted that I simply could not, and condone behavior that I could never condone,” he said, “and in the end, I knew that I would have to stand on a campaign stage with the President when people were shouting ‘Lock her up’ and things like that and I just couldn’t.”

Flake said that it would have been impossible to win a Republican primary while maintaining his positions, and he did not want to run a campaign in which he was not trying to win.

Since leaving office, Flake has joined CBS News as a contributor, working on a series entitled “Common Ground,” which the network describes as “stories that shine a light on opposing groups coming together.” He also spoke about the perks of not being in the public eye.

“People ask, ‘How’s retirement?,’ and I say, ‘My wife said the other day we’ve gone a month with no death threats.’”

However, he did not rule out the possibility of seeking public office again in the future.

“I need a breather, but this is a wonderful country and there are good people on both sides of the aisle in Washington,” he said.