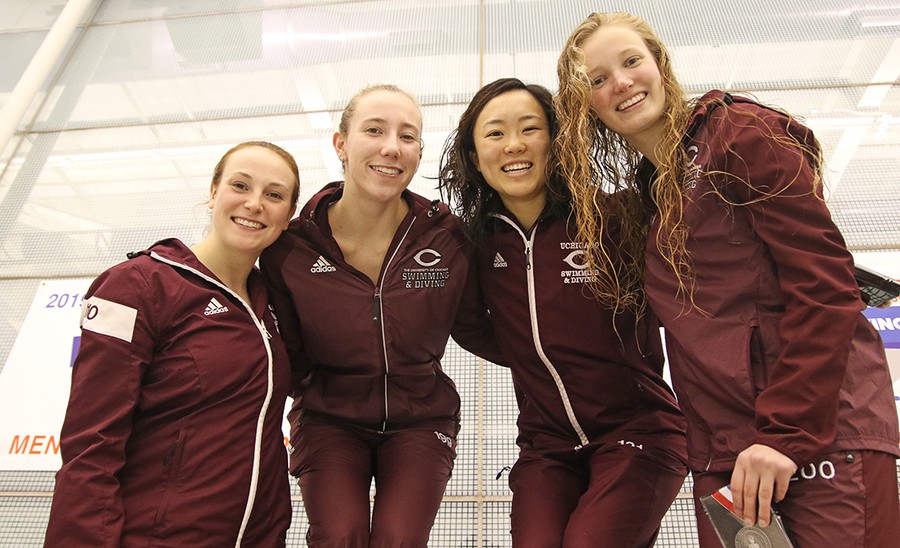 The UAA Swimming and Diving Championships occurred this past week. Beginning on Wednesday, the Maroons faced a rough start, with no athletes placing in the preliminaries. As only the men competed on Wednesday, the women had an opportunity to set a precedent beginning Thursday morning.

On the second day, two athletes broke 500 points in the preliminaries. In the finals, the team stepped up even further, taking the top three spots on the podium. Over the course of 11 dives, third-year Agnes Lo broke three records. Among this trifecta stands the UAA’s old record, the school’s, and the Myers-McLoraine Pool’s. First-year Elizabeth Cron likewise broke all three records, taking the spot of runner-up. Fellow first-year Alice Saparov placed third, rounding out a Thursday of trifectas. In the 50-yard freestyle, two UChicago athletes took spots on the podium as first and second runners-up. The 200-yard freestyle team, as well as the 400-yard medley team, posted times which met the standards for last year’s NCAA qualifications. Ultimately, the women ended the day with a record of 1–2–3.

On Friday, the third day of the UAA Championships, the Maroons had 34 swimmers compete across 14 events. Within these, the athletes recorded five all-UAA finishes. Second-year Hadley Ackerman gave the Maroons their first swimming win of the weekend with her NCAA-qualifying time of 56.09 seconds for her 100-yard butterfly event. Both the men’s and women’s 800-yard relays had strong finishes from fourth-year veterans Taye Baldinazzo and Hannah Eastman. To round out the day, first-year Martin Baffico placed third in the men’s 100 butterfly event.

On the final day, the Maroon team took home 11 all-conference finishes. The women’s team finished second, falling to long-standing champion Emory University. Still, the Maroons recorded an unprecedented total of 1,484.5 points. Taking hold of even more medals, Lo received her second UAA Diver of the Year award. She continued to add to her trifecta taste, breaking the league’s, school’s, and pool’s one-meter dive records, with the school’s record previously being held by Lo herself. Thus, by scoring 529.60 points, Lo bested her former record by an outstanding 30 points. The men placed third, falling behind Wash U and Emory.

Not only did the athletes receive recognition for their outstanding performances, but the coaching staff did as well. In her first year with the program, diving head coach Becky Benson was named Women's Diving Coach of the Year. Commenting on the success of the weekend as well as the honor received by her coach, third-year Audrey Mason said, “The whole team did an amazing job this weekend, which we deserved after so many months of tough training. We’re all so proud of Becky for winning Coach of the Year. Her energy at our 6 a.m. lifts keeps us all going and makes it easier to wake up in the morning. The divers especially really helped carry the team, and we were all so excited to beat NYU in the end. We’re looking forward to the rest of our season and to doing it again next year.”

The Maroons will next compete at the Midwest Invitational, beginning this Friday at 6 p.m.